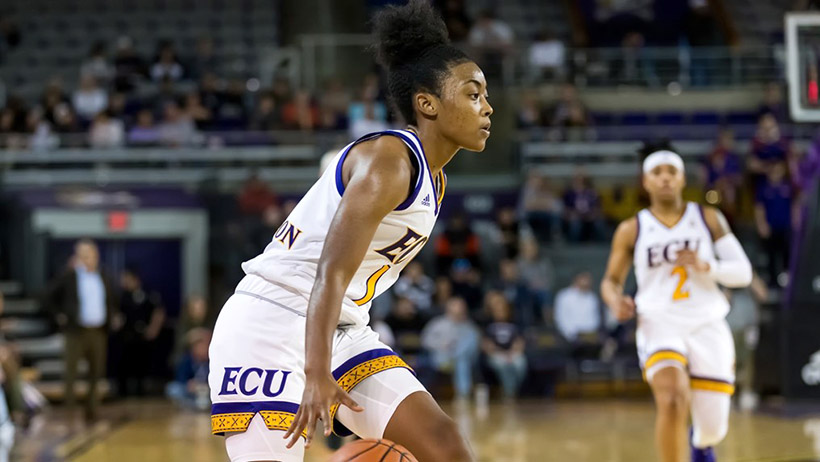 GREENVILLE, N.C.     After scoring at least 20 points in back-to-back games, Taniyah Thompson of the ECU women's basketball team has been named the American Athletic Conference Freshman-of-the-Week, as announced by the league office Monday afternoon.

"I'm so excited for Taniyah," said head coach Kim McNeill. "She's an extremely hard worker, very dedicated to this program and is very dedicated to whatever she needs to do to turn this thing around. I couldn't be happier for her."

Thompson averaged 22.5 points, two rebounds and a steal in 35.0 minutes last week. She scored a team-high 20 points in ECU's 71-65 win over Memphis. The Hamden, Ct., native did most of her damage against the Tigers in the third quarter, scoring 11 points and hitting a trio of three-pointers.

The freshman guard followed it up with a game-high 25 points in ECU's two-point loss at Wichita State. Thompson was the only Pirate to finish in double-figures in scoring and hit four shots from beyond the arc for the second straight game.

For the season, Thompson is averaging 12.8 points, 3.6 rebounds and 2.0 steals per game. She leads all AAC rookies in scoring, minutes played (34.4 mpg) and steals. Thompson also has a chance to become the first ECU freshman to average at least 10 points since Jasmine Young scored 13.0 points in the 2005-06 season.

ECU will be back in Minges Coliseum on Saturday, Feb. 8 to take on Houston. The Pirates will celebrate National Girls & Women In Sports Day with free admission for all fans.