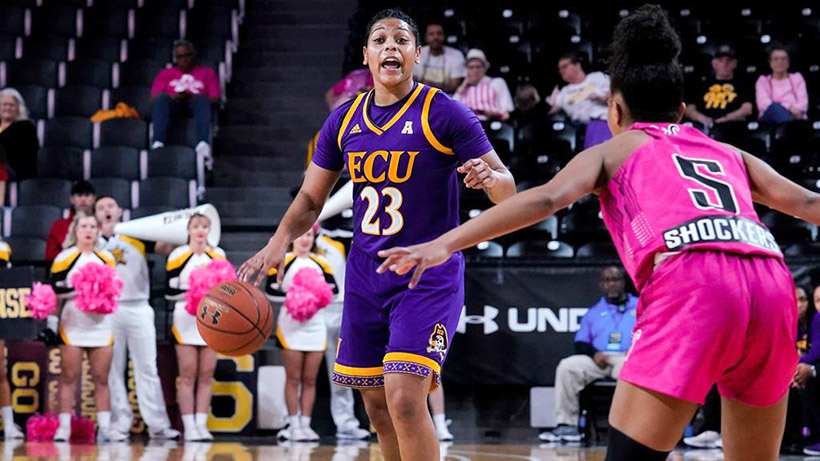 WICHITA, KAN.     For the second time in four games, the ECU women's basketball team fell just a basket short, as the Pirates dropped a 57-55 contest at Wichita State on Saturday afternoon.

ECU (4-17, 1-7 AAC) was led by Taniyah Thompson who finished with a game-high 25 points. Dominique Claytor had eight points and nine rebounds, while ECU's leading scorer Lashonda Monk had seven points and three assists.

It was a slow start offensively for both teams, as a Wichita State triple comprised the game's only points for nearly the first four minutes. Dominique Claytor finally took the lid off the rim for the Pirates with a jumper at the 6:02 mark, but after that, ECU's offense was all Thompson. The freshmen guard scored the next seven points for ECU as a part of a 9-0 run. Thompson later added a free throw and then a triple as time expired to give her 11 points in the opening quarter and help ECU to a 13-6 lead.

The Shockers answered back in the second quarter, scoring primarily at the free throw line. Wichita State shot 9-of-14 at the charity stripe in the second quarter, including 5-of-8 by Prince. On the other end, ECU was plagued by turnovers, giving the ball away seven times which negated a 5-of-9 (.556) shooting effort in the period. The Shockers finished the quarter on a 7-2 run to knot the score at 23-23 heading into the break.

Neither team could create any separation in the third quarter. ECU shot the ball well, finishing 6-of-13 (.462) from the floor and hitting a pair of triples. The Shockers only made four field goals on their end, but shot 6-of-9 from the free throw line to stay within striking distance. Heading into the fourth, ECU held a slight 39-37 lead.

The beginning of the fourth quarter belonged to the Shockers. Wichita State opened the frame on a 14-5 run, giving the Shockers their largest lead of the game, 51-44 with just 3:46 remaining. Only a pair of baskets from Thompson, one a triple, prevented the deficit from being even worse.

After an ECU timeout, the Pirates began to right the ship and get back into the game. Monk hit her first field goal of the game, this one a triple to stop an 8-0 Wichita State run. A possession later, Monk found Thompson for a short jumper to cut the lead to just two.

Wichita State pushed the lead back to four with just over a minute remaining before Monk hit her second three-pointer of the game to get ECU back within one. The Pirates needed a stop and they got one, giving ECU a chance to take the lead with under a minute to go. Coming out of the timeout, ECU ran Monk off a pair of screens and she found Claytor alone, who put a layup up and in, giving ECU a 55-54 lead with 22 seconds remaining.

Unfortunately for the Pirates, they could not get the stop they needed. Wichita State found DJ McCarty open in the corner and she made her first three-pointer of the game to put the Shockers back in front. ECU had one final chance to tie the game, but Monk's jumper bounced off the rim and out.

ECU will have a week off before returning home to take on Houston on Saturday, Feb. 8. The Pirates will celebrate National Girls and Women in Sports Day against the Cougars with free admission for all fans and opportunities for girls to shadow ECU employees. For more information, check HERE.


ECU Quote     Head Coach Kim McNeill: "I'm really disappointed in our lack of executing the gameplan against Wichita State today. I thought after our win against Memphis, we would come in with a different approach, a different mentality. I thought we had learned how to win and how to hold onto leads. But we'll get back after it on Monday. We can't hold our heads."