Coming off a win for the first time since the calendar turned to 2020, the ECU women's basketball team will try to continue its momentum with a road trip to Wichita State on Saturday afternoon. east carolina university, ECU, women's basketball, wichita state, gameday, january 31, 2020
Home
Categories
Login 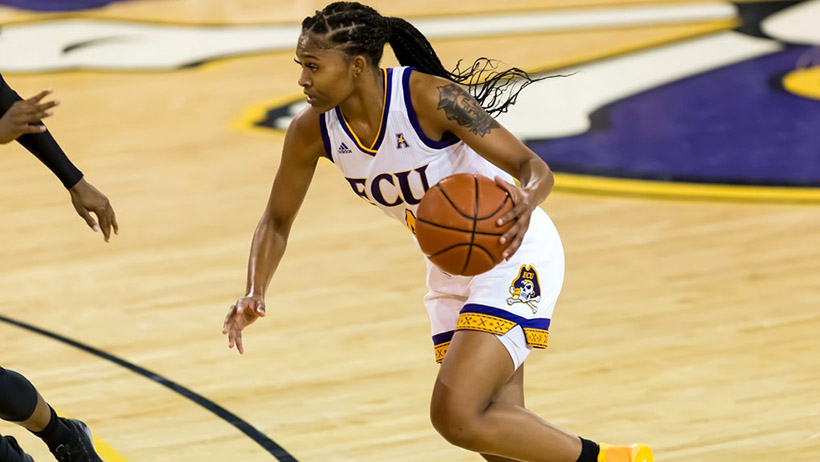 GREENVILLE, N.C.     Coming off a win for the first time since the calendar turned to 2020, the ECU women's basketball team will try to continue its momentum with a road trip to Wichita State on Saturday afternoon.

ECU (4-16, 1-6) used a balanced scoring effort to top Memphis 71-65. Four different Pirates scored in double-figures, led by Taniyah Thompson's 20 points and four made three-pointers. Dominique Claytor had a career-best 16 points and added seven assists and six steals. Ryann Evans finished with 12 points, the fourth time this season she has scored at least 10. Lashonda Monk, who is averaging a team-high 15.0 points and 16.7 in conference games, was held relatively in check with just 10 points, but she buried six straight free throws in the final minute to help hold onto the lead. The Pirates now have the top-three in the AAC in steals. Monk (77) leads the way and is fourth in the country while Claytor is second (64) and is 11 away from joining Monk in the program's single-season top-10. Thompson is third in the league with 42 takeaways and the team is second in the country in both steals (279) and steals per game (14.0). The Pirates have outscored opponents 19.6 to 15.2 per game in points off turnovers, but that gap jumps to 23.5 to 11.5 in ECU's victories, with ECU scoring at least 21 points in all four games.

Wichita State (11-10, 3-5 AAC) has been on an up and down rollercoaster during its conference slate. The Shockers lost their first two AAC contests, won three straight after that and have now lost three in a row. The most recent was a 64-44 loss at SMU on Wednesday evening. In conference play, Wichita State has been led by its defense. The Shockers are 10th in the league in offense, scoring 56.4 points and are fifth in defense, allowing 62.1 points. Mariah McCully is the only Shocker scoring in double-figures, averaging 13.1 points. Shyia Smith averages a team-best 5.2 boards while Seraphine Bastin is grabbing 5.0 rebounds. Bastin is second on the team in scoring as well, averaging 8.3 points while she has handed out a team-best 59 assists. Wichita State is in the top-10 in the country in both free throw attempts (fourth, 464) and free throws made (fifth, 314). The Shockers are also second to only ECU in the AAC in steals per game (10.1) and turnovers forced per game (20.95).

It will be the second meeting between the two schools this season. The Shockers earned a 61-53 win on January 12 in Minges Coliseum. It was the first time a road team has won in the series between the two schools, which is now tied 2-2. Katerina Tsineke had the best game of her collegiate career against Wichita State, scoring 15 points and hit a trio of triples while Monk also had 12 points. Wichita State used a balanced scoring effort, as nine different Shockers scored, and a 21-13 fourth-quarter to pull out the victory.

Tipoff is scheduled for 3 p.m., on Saturday afternoon inside the Charles Koch Arena.