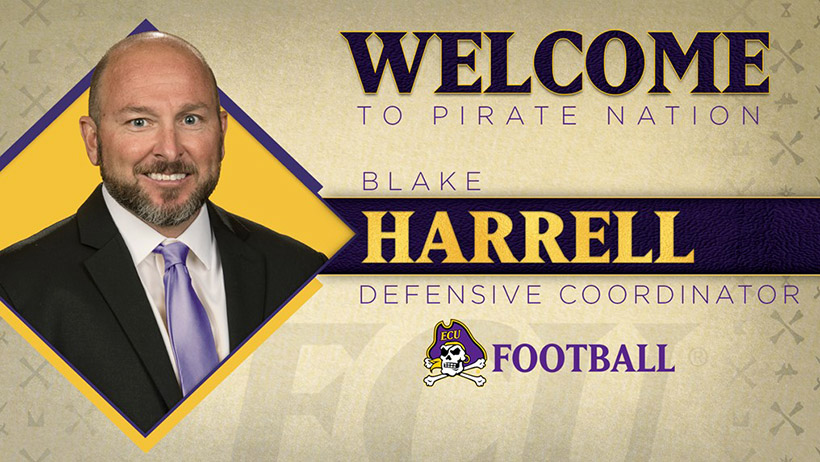 GREENVILLE, N.C.     Blake Harrell, whose record-breaking run-stopping units helped lead two different programs to postseason appearances in three of the last five seasons, has been named defensive coordinator at East Carolina according to an announcement from head football coach Mike Houston on Wednesday.

His acceptance to lead the Pirates' defense ends a one-year stay at Kennesaw (Ga.) State where he served in a similar role and coached the Owls' linebacking corps. Additionally, Harrell's appointment reunites him with Houston for the third time following earlier successes at Lenoir-Rhyne and The Citadel which produced a combined four conference championships.

"Blake's ability to innovate, energize and communicate have few equals in this profession," Houston said. "While our history together offers philosophical familiarities, his relentless work ethic, both on the field and in the development of a strategic recruiting network, makes him a perfect fit at East Carolina. We're excited to welcome Blake and his family to Pirate Nation."

Harrell, who will begin his duties with the Pirates effective immediately, helped lead KSU to an 11-3 mark, a second round Football Championship Subdivision (FCS) Playoff showing and a final No. 8 national rank in the AFCA Coaches' Poll in 2019.

He directly tutored junior linebacker Bryson Armstrong, who was a five-time All-America selection and the Big South Defensive Player-of-the-Year after recording 95 tackles and 12.0 TFLs. Armstrong was also one of four Owl defenders to earn all-league honors.

Before his appointment at KSU, Harrell spent five campaigns at The Citadel - the last three as defensive coordinator and linebackers coach. His stout defenses sparked the Bulldogs to back-to-back Southern Conference championships and a No. 6 overall seed in the FCS Playoffs during the 2016 season. He developed some of the most dynamic players in the SoCon during his five-year tenure in Charleston as the program embarked on its most successful run in school history.

The Citadel held five opponents to less than 100 rushing yards during the 2018 campaign and led the SoCon in first down defense, ranking 35th nationally. Perhaps the biggest highlight of the campaign came on Nov. 17 when the Bulldogs limited No. 1 Alabama to just 10 first-half points at Bryant-Denny Stadium, the Tide's lowest halftime total of the year.

Harrell's units consistently created takeaways during his time at The Citadel, racking up 83 in the last four years - including 31 during Houston's last season as head coach in 2015 to rank No. 3 in the country. His teams forced at least 17 turnovers in each of the last four seasons, an average of nearly two per game during the stretch.

The Citadel boasted one of the top defenses in the SoCon during the 2017 season, finishing league play with the No. 1 scoring defense, total defense and rushing defense. In 2016, the Bulldog defense was the cornerstone of a team that rolled off a program-record 10-game winning streak, a single-season school-record six road victories and a No. 6 national postseason seed.

Harrell worked seven years at Lenoir-Rhyne and handled a myriad of responsibilities such as defensive run game coordinator, special teams coordinator, linebackers coach and recruiting coordinator from 2007 to 2013.

Prior to LRU, Harrell coached the 2005 and 2006 seasons at Franklin (N.C.) High School where he had oversight of the secondary and added defensive coordinator duties in 2006. Harrell was part of an FHS squad that was 22-4 over those two seasons, and his '06 defense held opponents to just nine points per game.

He graduated from WCU in 2002 with a bachelor's degree in physical education before following with an MBA from Lenoir-Rhyne in 2012.

Harrell and his wife Jessie are the parents of three daughters - Kennedy, Kingston and Aspen.

WHAT THEY ARE SAYING ABOUT BLAKE HARRELL


"East Carolina is getting a great coach and an even better person. I've known Blake since I was blessed to coach him at Franklin High School 25 years ago. He was an energetic player who always gave tremendous effort and was a tireless worker, and those traits have made him into the outstanding coach he is today. I'm very proud of Blake and I know he will do an outstanding job leading the Pirates' defense in the AAC."
— Geoff Collins, Head Football Coach - Georgia Tech


"Blake Harrell is one of the guys I most enjoy talking defense with. The results both at the Citadel and at Kennesaw State speak for themselves. Coach Harrell is on the cutting edge of defensive football, and Im excited to watch his Pirates play fast and physical in the years to come."
— Alex Grinch, Defensive Coordinator - Oklahoma


"I had the opportunity to work with Blake Harrell at Lenoir-Rhyne University. He is a great football coach, but even a better man. Blake does a great job of building relationships and motivating players to be their absolute best. He is a dedicated husband, father and coach. It's an honor to call Blake a friend and I am excited for the next step in his highly successful career."
— Matt Guerrieri, Co-Defensive Coordinator - Duke


"Blake is a smart, hard-working, progressive coach who is eager to learn, has conviction and knows what it takes to play great defense."
— Robert Saleh, Defensive Coordinator - San Francisco 49ers