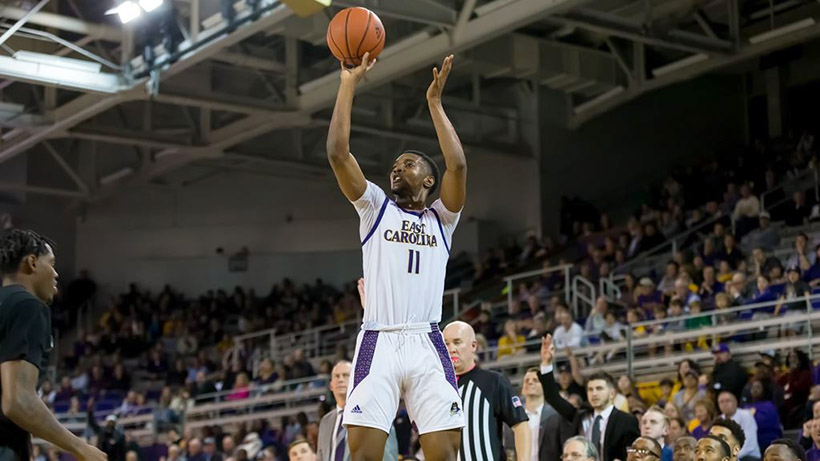 ECU Head Coach Joe Dooley called timeout and his team responded by pushing its lead back to 20 as Bitumba Baruti completed a 17-8 run with dunk with less than eight minutes remaining.

The Pirates return to action Wednesday, Jan. 29, against 25th-ranked Houston. Tip-off is set for 7 p.m. inside Williams Arena at Minges Coliseum.

East Carolina Head Coach Joe Dooley     Opening statement     "I thought our defense got us off to a good start, then obviously when you make some shots you get a little bit more confidence. I thought with the exception of the first five or six minutes of the second half, I thought we actually played pretty well and did some good things. We were a little lethargic to come out after the half, but I thought that our energy in the first half and our defense really sort of set the tone for us and gave us a little bit of confidence to get going."

On the fluidity of the offense     "We had 22 assists on 26 field goals. I thought the guys tried to share it and move it. I thought we moved more freely tonight and looked a little bit more coherent offensively."

On Tulane's second half run     "I don't care how much you're up, until the clock run's out, you're worried about everything. I thought we responded. You know they're going to make a run; you're just hoping you can answer it a little bit quicker."

Sophomore Jayden Gardner     On the team's overall performance     "Having the lead in the first half helped to get the crowd more into the game early and stay in the game throughout the whole game. It built up our confidence. Every shot we took seemed to be going in and it helped build up our confidence for defense."

On JJ Miles' shooting performance     "It's big-time.I love when he's making shots. It makes my assist totals go up. JJ is a great shooter. He's just going to keep getting better and more confidence, and he's going to keep being big-time for this program."

Junior J.J. Miles     On having the hot hand     "It was just a good game, a good shooting night for me. Seeing the first couple go in really gave me confidence and my teammates were able to find me when I was open."