In New Hanover County, the possibility of selling the county-owned hospital has ignited a storm of gossip and conspiracy theories, pitted the county’s leaders against one another, and mobilized some 200 residents into attending a Save Our Hospital protest meeting Tuesday, Jan. 21. carolina journal, new hanover, hospital sale, state treasurer, january 24, 2020
Home
Categories
Login 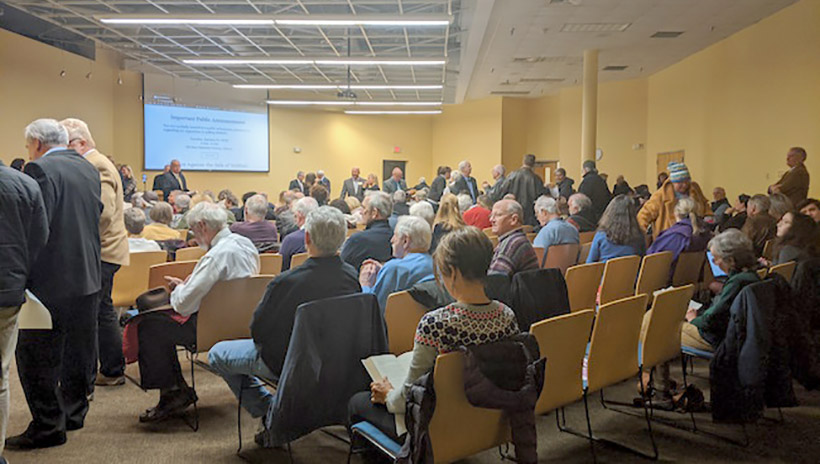 As New Hanover County considers selling or partnering its hospital, some 200 people attended the Save Our Hospital meeting to protest the process on Tuesday, Jan. 21. | Photo: Julie Havlak/Carolina Journal

In New Hanover County, the possibility of selling the county-owned hospital has ignited a storm of gossip and conspiracy theories, pitted the county's leaders against one another, and mobilized some 200 residents into attending a Save Our Hospital protest meeting Tuesday, Jan. 21.

But if the process sent locals into a panic, it also caught the attention of State Treasurer Dale Folwell, who spoke at Tuesday's meeting. Folwell is a staunch opponent of hospital consolidation. He spent the past year battling the state's eight major health systems to save the struggling State Health Plan, without success.

He's concerned about New Hanover Regional Medical Center. It might be a local hospital, but it's also a regional powerhouse that dominates southeastern North Carolina. NHRMC wields such leverage over the region that Folwell immediately slammed even the possibility of a potential merger. If the hospital joins a larger health system, its leverage could work against Folwell's push for price transparency.

Hospital mergers don't have a good reputation. Study after study blasts them for increasing the price of hospital services- sometimes by as much as 20% - and for squashing insurers' ability to bargain prices down for patients.

The State Health Plan is already strapped for cash. Taxpayers spend $3.4 billion each year on state employee health care, but the plan is only 3% funded, with $35 billion in unfunded liabilities. Without reforms, Folwell says, it will run out of money in three years.

Folwell tried to rescue the plan by pushing transparent pricing, but the state's major health systems boycotted his Clear Pricing Project last year. The largest of these health systems in the state, Atrium Health, has expressed interest in a partnership with NHRMC.

"There are some things that happen right before your eyes that are worth getting mad about," Folwell said. "The reason I'm standing here today is that if we don't start conserving our resources in health care today, we'll never be able to liberate the working-class citizens of N.C. ... We're destroying their joy of achievement and their upward mobility."

NHRMC doesn't share the financial woes of distressed rural hospitals. By multiple measures, the hospital is in strong financial shape, with more than $1 billion in annual operating revenue. Its future lies in the hands of the 21 members of the Partnership Advisory Group, which will eventually recommend a plan for the hospital, and the county's five commissioners.

"People are scared to lose control," Wilmington resident Kristy Maddox said. "We don't want someone coming in and taking that away from us, where making a profit is more important than taking care of people."

Hospital leaders said they began exploring future strategies because of the uncertainty that clouds health care today. Their concerns range from the possibility of Medicare for All to North Carolina's push toward value-based care - a pricing reform that rewards or penalizes hospitals based on health outcomes.

"Assessments have been done over the years to better understand how we can best position the organization for the generations to come ... to make sure that we remain a strong health system for this community," NHRMC President John Gizdic said. "Unfortunately, in the community, sale seems to be the focus. That is not the only option."

Gizdic has also said a merger would help the hospital make strides toward value-based care.

But all the talk of value could be a smokescreen for the usual incentive - money, said Dr. Gerard Anderson, director of the John Hopkins Center for Hospital Finance Management.

"That's mostly window dressing. The costs of complying with value-based care are relatively small as opposed to the whole operation," Anderson said. "Spending much effort on value-based care is pretty much fruitless for a hospital. ... Every insurer has a different metric for measuring value. And they don't put much money in it."

Anderson was also skeptical of any benefits that a sale could yield.

"The promises are that quality will improve, assets and services will improve, and costs will go down. In reality none of that occurs," Anderson said. "They always raise their rates because they can. ... If you become an essential hospital system in a community, every insurer has to contract with you."

North Carolina already hosts two of the nation's top five most monopolistic metro areas, according to a report by the Health Care Cost Institute, a national nonprofit research institute with funding ties to major insurers. At the meeting, Folwell blasted this consolidation and promised to continue fighting for his Clear Pricing Project.

"We spend too much money on health care ... and it is not because we have the highest quality in the U.S.," said Barak Richman, Duke University professor of Business Administration, at the meeting. "The reason why costs are so high is that we have a system of billing that is not only not transparent but also underhanded. It attacks individuals with bills in the most unexpected ways they cannot avoid. The second reason is that most hospitals have monopoly power."