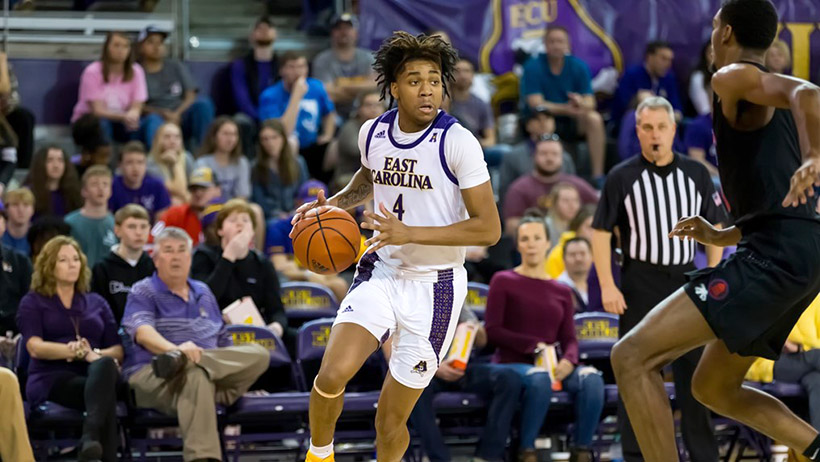 Less than two weeks ago, East Carolina stunned SMU as freshman Tristen Newton sank the game-winning 3-pointer with 2.7 seconds remaining to spring a 71-68 upset over the Mustangs inside Williams Arena at Minges Coliseum.

The Pirates shot 43 percent from the field, including 50 percent after halftime, made 11 of 28 (.393) 3s and committed only eight turnovers to overcome a 13-point second half deficit to snap a 10-game losing streak to its Texas rival.

Since their last meetings 11 days ago, East Carolina has suffered losses to Tulsa and Cincinnati, while SMU lost at Houston before defeating Temple on Saturday.

The Mustangs opened the season 8-0, but are 5-4 in their last nine games, but do have an overall home record of 10-1 this season. ECU is 0-5 on the road and has lost six straight in Dallas.

In Saturday's win over Temple, SMU junior Tyson Jolly had career highs of 25 points and 14 rebounds, including 22 after halftime to turn a two-point halftime deficit into a 16-point Mustang victory, 68-52. Three additional players scored double figures led by Isiaha Mike who finished with 12 points and 10 rebounds.

Mike had 21 points in the first meeting against ECU this season.

The Mustangs are ranked second among conference teams with an average of 76.2 points per game.

"The good news is that we have some familiarity," ECU Head Coach Joe Dooley said. "We know some of their tendencies because we just worked on them. This is a big personnel game, so we'll really pay attention to personnel and the matchups.

"We'll go through what was successful for us, just like they will, defensively and try to tweak some things. [SMU] does a great job of changing defenses on baseline out of bounds, so we'll try to tweak a couple of things."

If the Pirates are to sweep the season series, they will have to regain the form that helped them win six of seven, shooting over 40 percent in each, to even their record at 8-8 following a 2-7 start.

In its last two games, ECU shot 29 percent against Tulsa and 33 percent at Cincinnati. SMU is a flawless 11-0 when its defense holds opponents to a field goal percentage of 41.1 percent or less.

"We haven't shot the ball particularly well the last couple of games which has hurt us," Dooley said. "We need some guys to step and make some shots."

Freshman Brandon Suggs is coming off a career-high 16 points at Cincinnati on Sunday with four rebounds and three steals. Suggs ranks fifth among all conference freshmen in points (9.7 ppg) and assists (1.8 apg) per game as well as sixth in rebounding (3.8 rpg).

Sophomore Jayden Gardner continues to lead The American in scoring with 20.7 points per game, despite being held to just 32 total points the last two games. ECU is 8-3 less season when Gardner scores 20 or more and 0-7 when he scores less than 20.