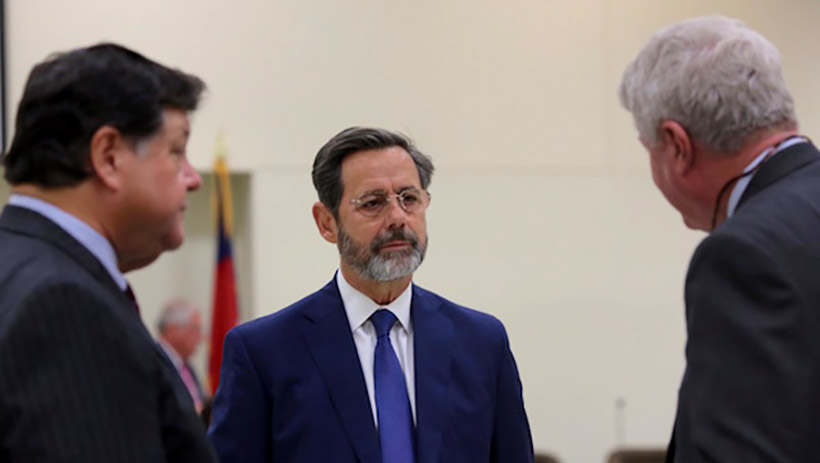 Ken Eudy, center, before he testified at a Nov. 8 meeting of the Joint Legislative Commission on Governmental Operations, Subcommittee on the Atlantic Coast Pipeline. | Photo: Don Carrington/Carolina Journal

Eudy was the governor's key negotiator in creating the discretionary fund. Lobbyist Kathy Hawkins represented Duke Energy, a partner in the ACP.

Eudy denied to the legislative committee he asked Duke Energy to provide a letter saying the creation of the $57.8 million fund was a voluntary initiative from ACP partners. But, Hawkins said, Eudy did ask her for such a letter.

Hawkins made her comments Nov. 18 to private investigators from Eagle Intel Services, a firm hired by the committee. She is no longer a registered lobbyist for Duke Energy.

In a final report issued Nov. 20, the investigators said it would be reasonable to conclude Cooper used the power of his office to pressure ACP developers into creating a fund as a condition for getting an environmental permit. The report also concluded, "the information suggests that criminal violations may have occurred," and "an investigative agency with the authority to compel cooperation and the production of documents could potentially obtain additional information to identify violations of criminal statutes."

Cooper's office said the report "relies on inaccuracies and bad facts to reach illogical conclusions." It maintains that no one in the governor's office interfered with the issuance of the ACP permits.

On Nov. 21, Lt. Gov. Dan Forest called on the FBI's Public Corruption Unit to investigate the ACP issue. FBI spokeswoman Shelley Lynch told Carolina Journal she is unable to confirm or deny that her agency has received a request concerning the Atlantic Coast Pipeline.

In 2018, the General Assembly's Joint Legislative Commission on Governmental Operations created an ACP Subcommittee to look into how Cooper's administration handled a water quality permit, the creation of the $57.8 million fund, and the settlement of a dispute between solar developers and pipeline partner Duke Energy. The subcommittee hired Eagle Intel. Eagle Intel investigators are former FBI and Treasury Department agents. Eagle Intel presented its findings to the Governmental Operations Commission on Nov. 20.

The 600-mile natural gas pipeline, now tied up because of legal issues unrelated to Cooper, would run from West Virginia to Robeson County, passing through Virginia. The ACP partners - led by Duke Energy and Dominion Energy - needed environmental permits from the federal government and each state before beginning construction.

A Duke Energy statement delivered to Eagle Intel on April 26, 2019, stated ACP officials believed North Carolina would issue the water quality permit, but ACP officials were concerned the delays would interfere with the January-to-March tree-felling season, knocking the entire project back a year.

Hawkins played a key role in trying to facilitate the water-quality permit. Eagle investigators first interviewed Hawkins on Sept. 9 and then again Nov. 18. Hawkins told investigators she listened to Eudy's Nov. 8 testimony at the ACP Subcommittee and noted inaccuracies in his statements.

On Jan. 26, 2018, the N.C. Department of Environmental Quality announced it issued the water-quality permit for the ACP. On the same day, Cooper's office announced ACP partners would create a $57.8 million fund that could be used for mitigation, economic development, and renewable energy. A "Memorandum of Understanding" between ACP and the governor's office stated the fund would be controlled by Cooper.

The Eagle report said Eudy called Hawkins after that meeting and requested that Duke Energy prepare a letter saying the $57.8 million was voluntarily provided by ACP.

With support from her superiors, Hawkins informed Eudy that Duke would not provide a letter.

At the Nov. 8, 2019, meeting, ACP Subcommittee Co-Chairman Sen. Harry Brown, R-Onslow, asked Eudy if he asked Duke to provide a statement regarding the voluntary status of the MOU and fund. "No, sir," Eudy responded. Hawkins told investigators Eudy was untruthful.

Also, according to the report, on Dec. 19, 2017, Hawkins and Eudy discussed the evolving MOU document. During the conversation, Eudy told Hawkins that Cooper, not DEQ Secretary Michael Regan, would make the final decision on the water-quality permit. The report referenced a text message from Hawkins to Duke CEO Lynn Good the same day stating, "KE said Gov will make this decision versus Regan." KE is Ken Eudy. A copy of that text message was included as an exhibit to the report.

At the Nov. 8, 2019, meeting, Brown asked Eudy about the governor's involvement: "Did Duke believe the governor was making the decision on the 401 Certification [water-quality permit]?"

Eudy responded: 'I cannot answer what Duke believed, but I can tell you that the governor and everybody I know in the governor's office repeatedly said, that was a decision that DEQ would make on the basis of science, technology and the law, and nothing else."

Brown asked again: "Did you inform anyone that the governor would be making the decision on the 401 Certification?"

A document recently discovered by CJ shows Cooper would be making a decision related to the pipeline.

The email said Cooper was going to make a decision, but it didn't specifically say what that decision was. The only known decision was whether the state would issue environmental permits for the pipeline.

"Please REPLY ALL with your questions about the pipeline. We're aiming to give the governor the best rationale for his decision that we can. If possible, please send your questions by the end of the day today. We're deputizing Jeremy Tarr to get your questions answered in the next week or so. Then we'll regroup and try to craft sharp pros and cons for the governor's consideration," Eudy wrote.

On Dec. 5, Eudy responded to CJ's questions about his testimony.

CJ: "Did you ask Duke for a statement regarding the voluntary status of the MOU and fund?"

Eudy: "I have no recollection of asking Kathy for Duke Energy to issue a statement. But I want to be clear. As I said in my testimony before the General Assembly, when I and the administration refer to the fund as 'voluntary,' we mean that issuance of the water-quality permit in no way depended on the creation of the fund. Duke has confirmed that is the case. However, as Bruce McKay of Dominion said in an interview, ACP viewed the fund as part of what was 'mandated by FERC [Federal Energy Regulatory Commission].'"

CJ: "Did you tell Hawkins that the governor would be making the decision on the 401 Certification [water-quality permit]?"

Eudy: "No. Kathy and I had many conversations. She may have misunderstood my answer to a question, or it's possible that I misunderstood my answer to a question she asked. But from the very first discussion on the Atlantic Coast Pipeline, Governor Cooper said that the permit would be decided by DEQ. The governor and members of the administration were consistently clear about that.

"As a reminder, the Republican report conceded that no one in the governor's office interfered with the issuance of the ACP permits, that Duke did not think their permits were contingent on the mitigation fund or solar settlement, and that the governor did not stand to benefit from any of this."