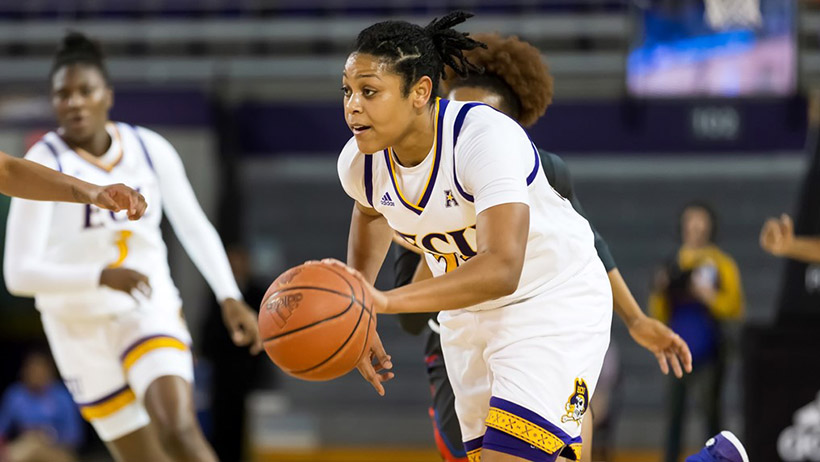 GREENVILLE, N.C.     With both teams looking to get their first conference win of the year, the ECU women's basketball team will take on Tulsa on Tuesday evening to close a two-game road trip.

ECU (3-14, 0-4 AAC) had one of its best shooting games of the season against Houston, finishing 24-of-52 (.462) from the field against the Cougars, but fell 72-63. Taniyah Thompson led ECU with 21 points, her third game of at least 20 points during her rookie season. She is second on the team in scoring and leads all AAC freshmen, averaging 11.6 points. Lashonda Monk leads ECU and is tenth in the conference, averaging 14.8 points. Monk is tied for fifth in the league in scoring in conference games, averaging 17.5 points, including breaking the 20-point mark against both UCF and SMU. Monk is just seven steals away from tying Delphine Mabry and Jasmine Young for second in ECU history in career steals as well as from becoming the first ECU player to rack up at least three of the program's top-10 single-season steal totals. As a team, the Pirates are second in the country in steals (236), steals per game (13.9), turnovers forced per game (25.3) and rank sixth in turnover margin (+8.29).

Tulsa (5-13, 0-5 AAC) has lost its last three games by double-digits after dropping its first two conference contests in overtime. The Golden Hurricane has been better at home, where it is 4-4, versus a 1-7 mark on the road. Kendrian Elliott is in the top-10 of the conference in both scoring (15.1 ppg, ninth) and rebounding (9.0, fifth), racking up eight double-doubles which is 20th in the nation. Alexis Gaulden is second on the team in scoring, averaging 8.4 points to go along with a team-high 78 assists. Her scoring has jumped to 10.8 points in Tulsa's five conference games. Tulsa's stats are very similar to ECU's, with the Golden Hurricane ranking in the top-100 of the country in steals and steals per game while struggling with its rebounding margin and field goal percentage. Tulsa is outrebounded by an average of 7.2 boards per game and is shooting just 36.3% from the field.

The series between ECU and Tulsa is deadlocked at 11-11, with the two schools splitting a pair of matchups last season. Tulsa earned a 75-55 win in Minges Coliseum last January, but it was a very different game when the two teams met in Tulsa in March. ECU trailed by 11 at halftime, but outscored the Golden Hurricane 40-25 in the second half and 24-12 in the fourth quarter to take a 64-60 win. Monk led the Pirates with 15 points, six assists and five steals. That was the second straight victory in Reynolds Coliseum for the Pirates, who are now 4-5 all-time in Tulsa. Over the past four matchups with Tulsa, ECU is 3-1, the best stretch since the Pirates won four of five against the Golden Hurricane between 2011 and 2015.

Tipoff is scheduled for 8 p.m., on Tuesday evening in the Reynolds Center. Fans can watch the game on Watch ESPN or follow the live stats HERE.