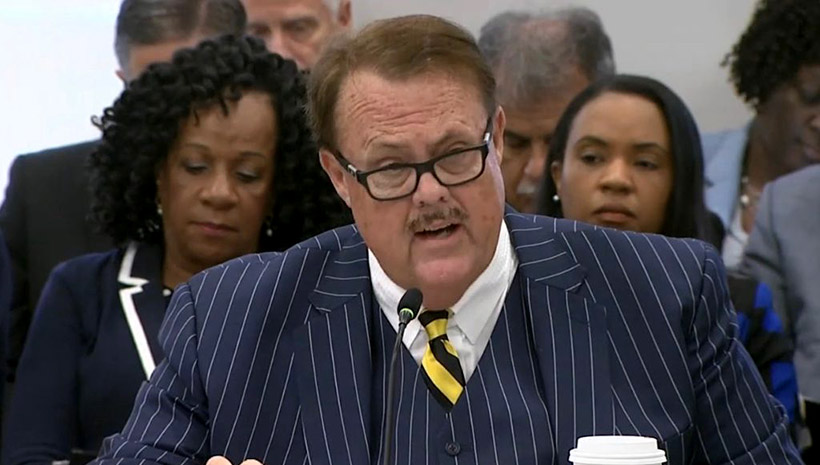 UNC Board of Governors member Philip Byers speaks during the Sept. 20, 2019, meeting.

Leaders of the University of North Carolina System are feeling "grim," in the words of one official presentation, after state lawmakers' latest one-day trip to Raleigh. Legislators embroiled in a political standoff have failed to pass a budget that would fund the university's priorities.

But the UNC Board of Governors is not relinquishing hope.

The BOG's public affairs committee lamented Thursday, Jan. 16, over the General Assembly's recent failure to override Gov. Roy Cooper's veto of the state budget. Cooper blocked the budget in June, staking the fate of the state's finances to a partisan argument over Medicaid expansion. The House overrode the veto in a surprise September vote, but the Senate remained in limbo. On Jan. 14, legislators met in a one-day session, and all eyes turned to the Senate chamber to see if any Democrats would split from their party to vote with Republicans and provide the three-fifths majority needed to override Cooper.

But Democrats made it clear they wouldn't deviate, and the Senate left without taking up the measure.

With Senate Leader Phil Berger, R-Rockingham, signaling another stab at the state's budget is unlikely, UNC System officials are now worried. So members of the BOG committee unanimously voted to author a resolution for the full board's consideration. The full board could vote to send it to the General Assembly.

Lawmakers need to understand that harm will befall UNC if the impasse continues, members said.

"The last time I felt this good was when my mom called me and said my dog had run away from home," said committee chairman Phil Byers.

No budget means no extra money for N.C. Promise, the budding, successful program that allows $500 per semester in-state tuition at Elizabeth City State University, UNC-Pembroke, and Western Carolina University. While current and incoming students will continue to pay the cut-rate tuition, Carolina Journal learned, the three affected schools are worried about subsequent capital expansion and repair costs that now may be underfunded in the absence of a budget.

UNC's chancellors were counting on $630 million for authorized capital projects, and $130 million for repair and renovation across campuses, Drew Moretz, UNC's vice president of state government relations, told board members.

Not any more. Not unless something at the legislature changes, at least, Moretz said.

No budget also means no pay bumps for faculty recruitment and retention. Money for ongoing data modernization - a hefty effort the UNC System has prioritized - is stalled.

UNC is also worried about the policy changes worked into the budget. Those included elimination of some red tape in UNC human resources, changes to the system's experimental laboratory school program, and the Future Teachers N.C. and Teaching Fellows programs.

The N.C. School of Science and Math, which is expected to open a second campus in Morganton in 2021, is also worried, said NCSSM Chancellor Todd Roberts. Building costs are funded, but operational expenses are a concern, he said.

It's possible lawmakers may still find a way to reach a consensus, but there are no guarantees, Rep. John Fraley, R-Iredell, told committee members.

"There are too many things that need to be dealt with," Fraley said. "My only comment is that we all ought to be embarrassed."