Despite one of its best shooting performances since the calendar turned to 2020, the ECU women's basketball team dropped a tough 72-63 contest to Houston on Sunday afternoon in the Fertitta Center. east carolina university, ECU, women's basketball, houston, final score, january 20, 2020
Home
Categories
Login 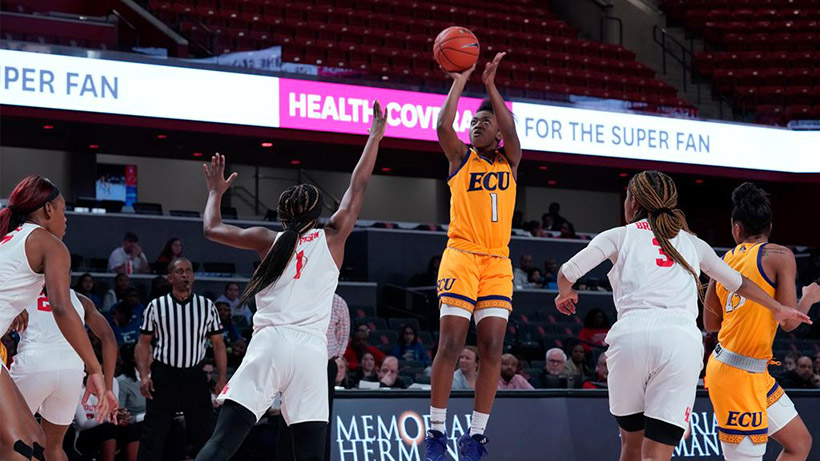 HOUSTON, TEXAS     Despite one of its best shooting performances since the calendar turned to 2020, the ECU women's basketball team dropped a tough 72-63 contest to Houston on Sunday afternoon in the Fertitta Center.

ECU (3-14, 0-4 AAC) were led by Taniyah Thompson who had one of the most efficient scoring games of her young career, finishing with 21 points on 9-of-14 (.643) shooting to go with three steals. Lashonda Monk finished with 13 points while Ryann Evans had 11 points on 4-of-5 (.800) shooting. Dominique Claytor handed out a team-high four assists and grabbed five of ECU's 13 steals.

Thompson, Monk and Katerina Tsineke carried the ECU offense in the first half. In the first quarter, Houston threatened to pull away early, leading by eight. Thompson was the only Pirate able to get any offense going scoring ECU's first nine points. Monk got her first points of the game with a three-pointer to beat the first quarter buzzer and cap a 6-0 ECU run that cut Houston's lead to just 14-12.

Thompson and Monk combined for ECU's first six points of the second quarter before Tsineke joined in by canning a three-pointer. The freshman guard followed it with a pair of free throws to give ECU a 23-22 lead, it's first since 4-2. ECU got field goals from Necole Hope and Ryann Evans in the final two minutes of the first half to help the Pirates take a 31-28 lead into the locker room.

ECU opened the second half on a 7-2 run to take a 38-30 lead, its largest of the game. The Cougars answered with a run of their own, primarily powered by free throws and layups. Houston went on a 21-6 run, with 19 of those points coming at either the free throw line or in the paint, to take a 51-44 lead with under a minute remaining in the third quarter. ECU did get a lifeline by scoring four of the final five points of the quarter, including a jumper by Thompson that came off an inbounds pass with just 1.8 on the clock.

Unfortunately, that momentum did not carry over into the fourth quarter. Hill made a pair of field goals in the paint and Gladney followed with a three-pointer to push Houston's lead to 59-48.

ECU made a pair of runs to get back into the game. The first cut the score to 59-54 with 5:33 remaining while the second made it 64-58 with 2:37 on the clock. But each time, Houston made a back-breaking three-pointer to cut ECU's momentum and extend the lead. After the second triple, ECU could not get closer than seven points.

ECU finish up a two-game road trip on Tuesday night when the Pirates take on Tulsa. Tipoff is scheduled for 8 p.m, inside the Reynolds Center.