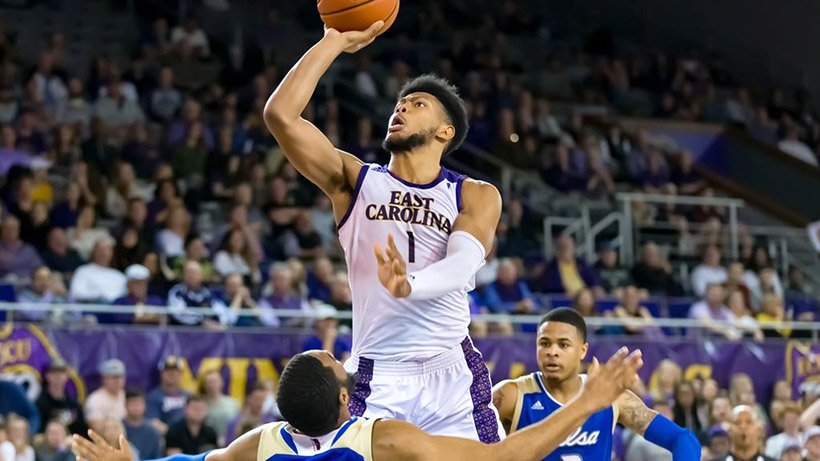 The Golden Hurricane dominated inside, scoring 36 points in the paint and made 20 of 39 field goal attempts inside the arc. Overall TU shot 43.4 percent, while holding the Pirates to 29.2 percent, their lowest of the season.

East Carolina Head Coach Joe Dooley     Opening statement     "I give Tulsa a lot of credit for the way they played defensively. I thought they did a nice job of controlling the tempo. Thirty to 30 (at half). I didn't think we played particularly well in the first half, a lot of it attributed to them and I didn't think we had a lot of pop in the second half."

On the team's 3-point shooting     "I thought we had some open looks and I said of the 24 misses, 15 of them had no chance of going in. I mean it was like we were running in mud the second half and we started thinking. We turned down open 3's in the first half. I thought that we were open and drove, then all of a sudden it was almost like an avalanche. We had a bunch of them that weren't even close."

On Tulsa's defense     "They were playing a 3-2 zone and they would match when the ball goes to the high post. There were [several] things we talked about yesterday, Monday, and even today in huddles. We screened the wrong guy [several] times. We just had a little bit of a far-away look at times."

ECU Sophomore Jayden Gardner     On the team's overall struggles     "This game was very frustrating. We couldn't throw a rock in the ocean tonight. We didn't have anything going in. We had a lot of stretches where we didn't make any runs, and a lot of open 3s that we couldn't convert. Transition offense was off tonight. It was just a really off night."

On the physicality of the game     "It was much rougher down in the paint tonight. There was a lot of switching, and a lot of hands on, there was a lot called but not all. It is what it is, it's league play."