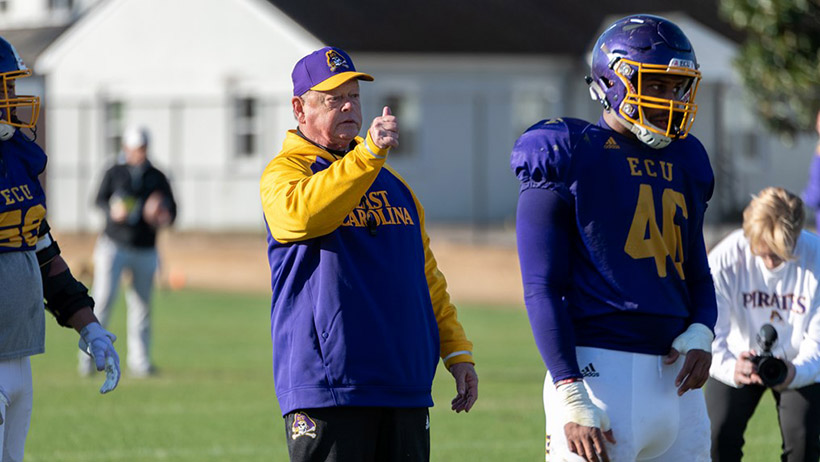 Hanson was named to Houston's initial ECU staff on December 7, 2018 and completed his 46th overall season last fall to cap a full-time career that began in 1974 at alma mater Richmond. Among his years of service were 11 as defensive coordinator and 11 more as recruiting coordinator, the latter resulting in nationally-ranked classes at Atlantic Coast Conference member Virginia.

"Jeff is not only highly-regarded in our business, he's also incredibly well-respected which I believe speaks volumes of who he is as a person," Houston said. "He is a great coach and communicator who positively impacted and helped develop countless of young men during his career and he will be missed. Having the opportunity to work with him over the last four years has been a privilege and I certainly wish Jeff and DeDe all the best in their retirement."

Prior to his move to East Carolina, Hanson was a member of Houston's staff at James Madison from 2016 to 2018 and mentored seven All-Colonial Athletic Association performers, including Andrew Ankrah who was selected as the 2017 Football Championship Subdivision (FCS) Defensive Player-of-the Year.

He also played in key role in Dukes' No. 1 national rank in four defensive statistical categories in 2017 - scoring (11.1 ppg), interceptions (31), pass efficiency defense (83.12) and turnovers gained (44). A year earlier, he was credited with playing an instrument role in JMU's defensive turnaround as the Dukes stood eighth nationally in turnover margin (+1/13) and 17th in scoring defense (21.2) on the way to an FCS title.

He earned his first national championship ring in 2008 as the Spiders' associate head coach.

Hanson graduated from UR with a bachelor's degree in physical education in 1972 after lettering as a linebacker and helping the Spiders to a 1968 Tangerine Bowl title.

Hanson, who will turn 71 in September, and wife DeDe are the parents of three daughters - Laurie, Kristin and Katie.