For just the second time in 46 days, the ECU women's basketball team will get to play in friendly confines as the Pirates host SMU on Wednesday night inside Minges Coliseum. east carolina university, ECU, women's basketball, vs SMU, gameday, january 8, 2020
Home
Categories
Login 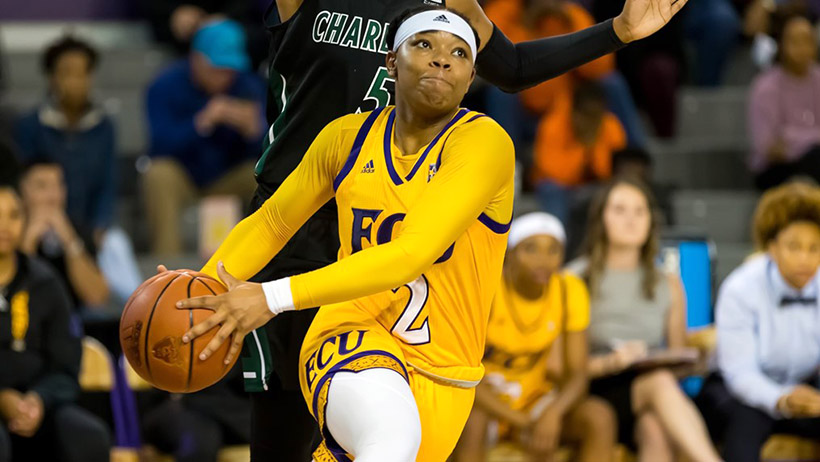 GREENVILLE, N.C.     For just the second time in 46 days, the ECU women's basketball team will get to play in friendly confines as the Pirates host SMU on Wednesday night inside Minges Coliseum.

ECU (3-11, 0-1 AAC) dropped its first AAC game of the season at UCF on Sunday. Lashonda Monk was the bright spot for the Pirates, scoring 22 points, grabbing four rebounds and eight steals. Monk leads ECU in scoring and is tenth in the AAC, averaging 14.6 ppg. The eight steals for the junior guard represent the sixth time in her career she has reached at least eight takeaways and she is leading the conference with 3.93 steals per game. Second on the team in scoring, and first among AAC freshmen, is Taniyah Thompson with the Hamden, Ct., native scoring 11.9 points. Monk, Thompson and Dominique Claytor are all in the top-six of the conference in steals. Monk is fourth in the country with 55 on the season and is seventh among active players with 246 career steals. Claytor is second in the conference, having grabbed 41 steals this year while Thompson is sixth with 28 takeaways.

SMU (6-7, 0-1 AAC) opened its conference slate by hosting No. 1 UConn, falling 80-42. The Mustangs have spent the majority of their early schedule at home, playing 10 of their 13 games in Moody Coliseum. Reagan Bradley has had an outstanding start to her collegiate career, averaging 10.0 points so far during her rookie campaign while also handing out 60 assists, which is second in the AAC. Johnasia Cash is just a few rebounds away from averaging a double-double and the junior forward is scoring 10.0 ppg and grabbing 9.7 rpg while blocking 24 shots. The Mustangs have been strong on the offensive glass, ranking 14th in the country by grabbing 16.4 offensive boards per game. They are also in the top-20 in overall rebounding, hauling in 43.69 rebounds each night to rank 20th. The Mustangs also excel at blocking shots, as they have average 4.8 rejections, second in the AAC and 35th in the country. SMU does nearly all of its damage inside the arc, as the team has only made 26 three-pointers this year, ranking last in the NCAA.

ECU and SMU are very familiar with each other, having played six times over the past two seasons and in the first round of each of the past three AAC Championships. The Pirates hold a 14-8 record against the Mustangs and have won five straight in the series, including a 67-61 victory on Senior Day last March. Just four days later, the two teams met in the league's postseason tournament and ECU claimed a narrow 50-48 overtime win thanks to a double-double by Salita Greene and 12 points from current graduate assistant Alex Frazier. The Pirates are a dominant 8-1 at home against the Mustangs, winning seven straight in Minges Coliseum since losing in 2008. The Pirates will be trying to start 1-1 in the AAC for the second straight year. Last season, ECU lost on the road against Tulane, but returned home to top Wichita State.

Tipoff is scheduled for 7 p.m., on Wednesday night inside Minges Coliseum. Fans can stream the game HERE or follow the live stats HERE.