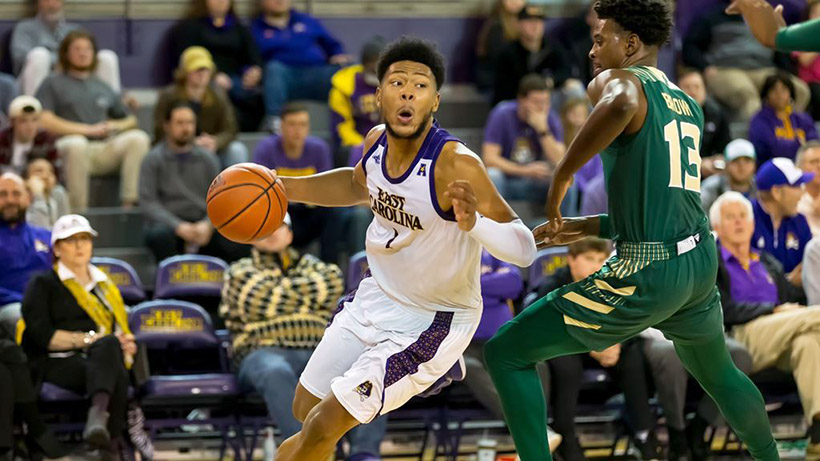 GREENVILLE, N.C.     Jayden Gardner made a game-saving block in the closing seconds as East Carolina held off South Florida, 62-59, inside Williams Arena at Minges Coliseum on Tuesday night.

The Pirates led by 13 points with 13 minutes to play but Laquincy Rideau's floater in the lane capped a 19-4 USF run and gave the Bulls a 57-55 lead.

Gardner, who had been held without a field goal for more than 10 minutes, tied the game at 57 with 2:41 to play.

Bitumba Baruti then put the Pirates ahead with a 3-pointer from the top of the key with 1:26 to go in the second half.

David Collins made an uncontested layup for South Florida, making the score 60-59 with 1:01 remaining but the Bulls did not score again.

Following an exchange of possessions, ECU freshman Tristen Newton made both ends of a one-and-one with 15 seconds to go to give the Pirates a 62-59 lead before Gardner blocked a potential tying 3-pointer with six seconds left.

Gardner finished with 23 points and 10 rebounds with three assists, two blocks and a pair of steals.

Brandon Suggs had 12 points for East Carolina (7-8, 1-1 American Athletic Conference), which has won five in a row at home.

After shooting 38.5 percent in the opening 20 minutes, the Pirates connected on 54 percent of its second half field goal attempts.

ECU Head Coach Joe Dooley     Opening Statement     "Good win for our guys, I thought we got off to a pretty good start. I thought our defense really carried us for the most part today that we needed to. The big thing I was happy with was when we got ourselves in a jam in the end and they took the lead, we found a way to battle our way out of it. You know, you've been controlling the game the whole time and then all of a sudden, someone takes the lead. You got a choice of feel sorry for yourselves or go out and do something about it, you guys went out and did something about it."

On the importance of a conference win at home     "It's important. We were talking about having a good season you got to win your home games, have great seasons you got to win some on the road. The first game crowd was terrific, got loud and I thought that the guys responded pretty well. Good news is there's a lot of stuff we can continue to fix as this goes along."

On being able to finish the game     "That's a part of learning how to win. The other night, you're in a pressure situation and you make a play or two and you don't win because you made some bad plays and we made some plays, but we made enough good plays to finish this one out."

On the importance of the crowd tonight and in the future     "The crowd was amazing. Students are starting to come back so students mixed with the fans that are already here, Minges will be crazy. We need you guys, need your support. Your support really helped us tonight, big defensive stand, so just come out here and keep supporting us. We're gone keep fighting you guys all season long."

Guard Brandon Suggs     On the Pirates' defense     "I feel like our defense was good, but towards the end of the game we got a little happy with the score because we started winning. I think we went up 13 and we got comfortable, which made them come on a run. But we were solid enough at the end to get the win."