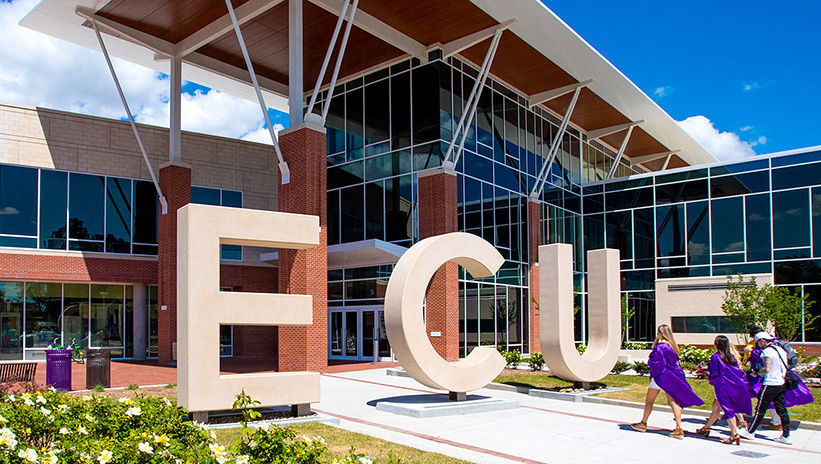 ECU’s Main Campus Student Center has been host to thousands of students and visitors per day since it opened on Jan. 7, 2019. | Photos: Rhett Butler

It seems like yesterday that dignitaries from East Carolina University and across the state gathered to cut the ribbon opening the Main Campus Student Center on 10th Street, but it has now been a full year since that momentous occasion.

The building, a 220,000-square-foot multipurpose facility, is LEED certified and received Best Overall Design in North Carolina from Business North Carolina Magazine and a 2019 Award for Excellence in Stuctural Engineering from the Structural Engineers Association of North Carolina. It pairs cutting-edge technology like electrochromatic glass windows and radiant heating with nods to Pirate traditions - the ECU creed appearing on the main staircase and the ballroom floor featuring the outline of eastern North Carolina. 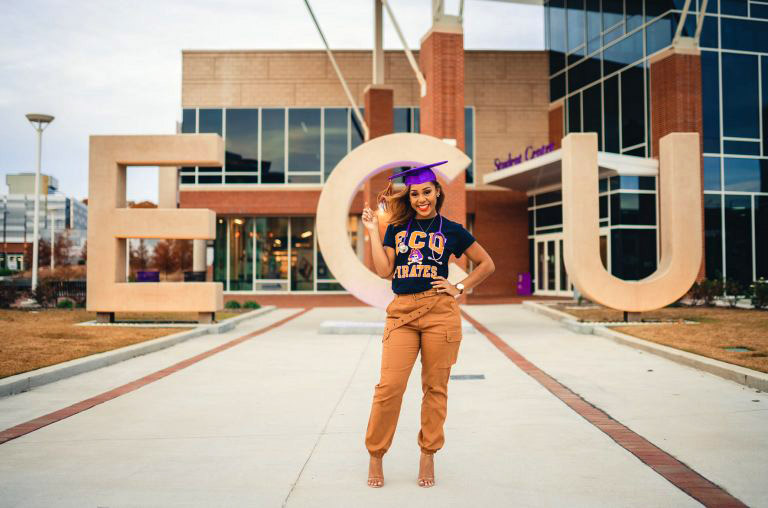 Danielle Graham, an ECU College of Nursing December graduate, poses in front of the Main Campus Student Center. | Photo: Joan Avilez
Outside, large letters spelling ECU declare the building's purpose and pride - and have already become a popular spot for photos, especially during graduation, orientation and campus tours. The landscaping, made up largely of native species and watered in part with collected rainwater from an underground cistern, was designed to minimize the site's environmental impact.

But it's inside the building where students have found themselves at home, quickly incorporating the facility into the steady routines of campus life as if it had been there all along. The 14,000-square-foot ballroom stays busy, either as one huge event space or divided into three. Smaller multipurpose rooms are used for group study sessions and student organization meetings.

And with thousands of hungry students coming and going, it should go without saying that the dining spots, including Raising Cane's, 1907 Grill, Au Bon Pain, Panda Express, Starbucks and The Confectionary, are in steady demand.

Bryan Tuten, director of Dowdy Student Stores, credits the new location with a 20% increase in sales of general merchandise items such as ECU-licensed clothing and gift items.

"The student center has improved the morale and overall spirits of not just the students, but the alumni that visit as well," he said. "A lot of major ECU events are now being held here ... since it's such a beautiful facility and a definite selling point for ECU." 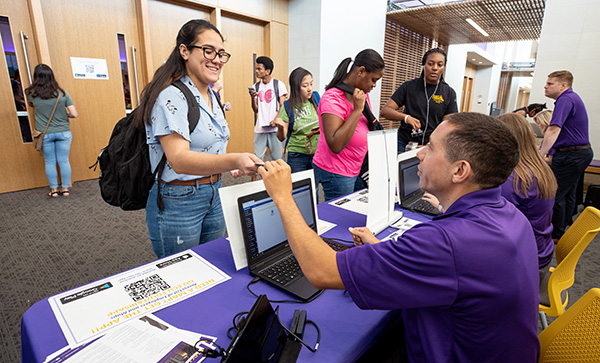 The student center’s ballroom provides enough space for large events like the 2019 Fall Part-Time Job Fair.
Thousands of visitors per day come through the building - Dean Smith, ECU student centers director, said the daily average of 3,484 visitors (June-November 2019) represents a 600% increase in foot traffic over that recorded at Mendenhall, the previous student center. The first day of classes last August brought more than 19,000 people into the Main Campus Student Center.

"Student centers have only one job: to be everything to everyone," Smith said. "What you see when you are at the student center is a wide variety of students, faculty, staff and community members utilizing the space in a way that best fits their needs. [It] has built a sense of community while providing food and services that our students need."

Dr. Mark Rasdorf, associate director of the Dr. Jesse R. Peel LGBTQ Center, the largest of its kind in the UNC System, said the LGBTQ center is inviting and offers social space, study space and quiet space, providing the versatility to simultaneously serve several needs at once.

"We have always described ourselves as a resource, referral, educational and social center for the entire campus," Rasdorf said. "Our new location in the student center affords us vastly improved visibility, and we have experienced a steady flow of new visitors to the LGBTQ center."

Among the student organizations located in the student center, the Student Government Association is perhaps the most visible. SGA's second-floor space overlooks the 10,000 square-foot commons area. 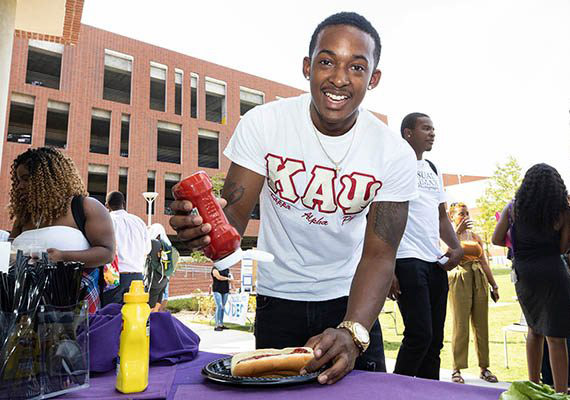 Melvin Carter grabs a hot dog during the Ledonia Wright Cultural Center picnic on the lawn at the Main Campus Student Center.
"The new SGA office is in a prime location in the student center to engage with students every day," said SGA president Colin Johnson. "We get much more interaction from the student body being located in such a highly visible space. We always have an open door in the office and welcome everyone to come speak with their SGA representatives."

Dr. Virginia Hardy, vice chancellor for student affairs, said the center is doing exactly what it was intended to do - give ECU students a sense of belonging.

"We've touted the student center as being the 'living room' of the campus community. It has become that and much more," she said. "The student center has become a welcoming and inclusive environment for all students and a showpiece for our entire campus."

"The new student center has been a game changer, as Dr. Hardy stated at the opening ceremony a year ago," said Dr. Erik Kneubuehl, associate vice chancellor for student affairs. "The facility demonstrates in a very direct way that East Carolina is a large research university that honors its history in eastern N.C. while at the same time preparing a diverse student body for careers that influence and change communities."