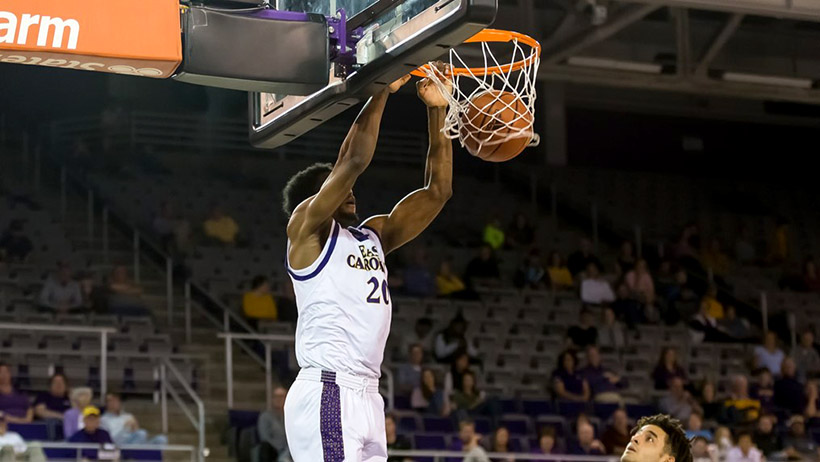 The Pirates opened conference play with a 75-69 loss at No. 24 Wichita State on New Year's Day before having a bye weekend. USF started league play with a road loss to SMU last Wednesday but bounced back to post a 75-60 win over UConn at home on Saturday.

Redshirt senior Laquincy Rideau led the Bulls with 17 points and six assists in their win over the Huskies with senior David Collins scoring 15 points and collecting four steals. The duo ranks first and second on the team in scoring with Collins averaging 14.6 points per game and Rideau 13.2 points per game.

Rideau is the catalyst of USF's defense which ranks 30th in the NCAA with 17.1 turnovers forced per game and 39th with 8.9 steals per game. Rideau averages a conference-best 2.6 steals per game, ninth-highest average in the country.

"Those two guys can really put the ball and get to the basket," ECU Head Coach Joe Dooley said. "They are very balanced and very good defensively. If you look at their defensive numbers, from a points per game perspective (62.4 ppg), it's terrific."

USF has the third-best scoring defense in The American, but the lowest-scoring offense (64.8 ppg).

Over the past five games, East Carolina has held their opponents to 37.2 percent shooting from the floor and yielding just 65.8 points per game, while converting 45.9 percent of its own attempts and scoring more than 72 points per game.

A vast improvement for ECU after allowing its foes to score more than 75 points per game and shoot 46 percent from the floor in the first nine games. The Pirates averaged just 71 points in those games themselves and connected on 41.1 percent of their shots.

Sophomore Jayden Gardner has scored more than 20 points in six consecutive games and leads The American with 21.3 points per game. He also ranks among the top 4 in offensive rebounds (1st), double-doubles (1st), rebounds per game (third) and field goal percentage.

"Gardner is a handful, but they've got some other pieces as [Dooley] has brought in some new guys who are playing better," USF Head Coach Brian Gregory said. "Gardner is one of the top 5 players in the league and one of the best power forwards in the country."

Five additional players average more than eight points per game for ECU with sophomore Tremont Robinson-White scoring 10.7 per game as the only other Pirate to average double digit points.