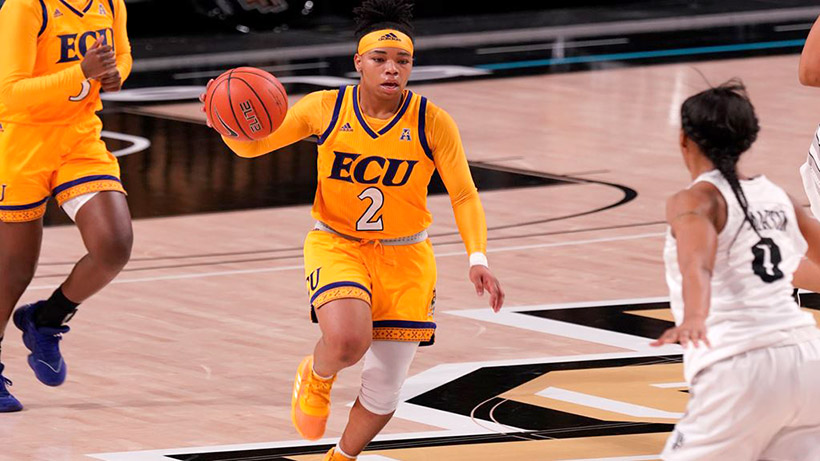 ORLANDO, FLA.     An early three-point barrage put the ECU women's basketball in a hole and the Pirates could not climb out against UCF, falling 91-55 on Sunday afternoon at Addition Financial Arena.

Lashonda Monk was a bright spot in the loss for the Pirates, finishing with 22 points, four rebounds, three assists and a season-high eight steals. She was the only Pirate in double-figures, although all eight ECU players did score at least four points. The Pirates forced 29 UCF turnovers, a season-high for the Golden Knights and the third time this season ECU has forced at least 29 miscues.

Brittney Smith led the way for UCF, scoring 21 points on 8-of-10 shooting. Georgia Gayle went 6-of-7 from behind the arc to finish with 18 points while Sianni Martin also had 14 points. AAC Co-Preseason Player of the Year Kay Kay Wright finished with eight points and eight assists while Masseny Kaba had seven rebounds and four blocks.

It was not an ideal start for the Pirates, as UCF jumped out to an 11-0 lead behind three triples from Gayle. ECU got it back within seven after buckets from Hope and Monk, but another three-pointer from Gayle sparked a 17-5 UCF run that left the Pirates trailing 28-9 after the first quarter.

UCF continued to hold the upper hand in the second quarter, opening the frame on a 12-0 run powered entirely by Smith and Martin. The ECU offense could not get going in the quarter, scoring just six points. Martin went 3-of-3 from three-point range, helping UCF outscore ECU 24-6 in the second quarter and take a 52-15 lead at halftime.

ECU will be back home on Wednesday evening when the Pirates take on SMU. Tipoff is scheduled for 7 p.m., inside Minges Coliseum and the game will be broadcast on the American Digital Network.