ECU Picked as Preseason Favorites in the American 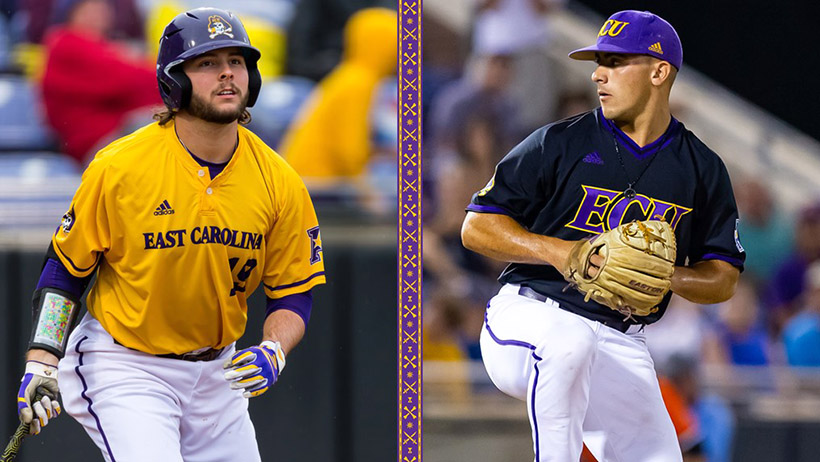 PROVIDENCE, R.I.     After advancing to its fifth Super Regional in program history in 2019, East Carolina has been picked first in the 2020 American Athletic Conference preseason poll, as chosen by the league's nine head coaches. The Pirates, who set a new conference record for wins with 20 a year ago, picked up six of nine first place votes.

Junior Alec Burleson has been named preseason player-of-the-year, while fellow classmate Jake Kuchmaner was tabbed as the preseason pitcher-of-the-year. Both were also chosen to the all-conference team with Kuchmaner being the lone unanimous selection.

During the summer, Burleson played for the USA Collegiate National Team helping the Red, White and Blue to an 8-6 overall record which included series wins over Chinese Taipei and Cuba. He appeared in eight games making four starts in the field where he batted .267 (4-for-15) with a home run and three RBI. His lone home run, a solo walk-off blast in the bottom of the ninth, lifted USA to a 3-2 victory over Japan and was named USA Baseball's International Performance-of-the-Year. On the mound, he sported a 2.53 ERA in three outings striking out eight in 10.2 innings.

Kuchmaner, a first-team all-conference pick last year, posted a 7-2 record in 17 appearances (14 starts) with a 2.99 ERA. He tossed the 28th perfect game in NCAA DI history at Maryland (March 17) just a week after no-hitting No. 9 Ole miss through 8.2 innings on the road. He stood second on the team in strikeouts (73) and innings pitched (87.1), while walking 26 and holding opposing hitters to a .203 composite batting average.

The Waxhaw, N.C. native worked into the seventh inning five times, eighth on four occasions and ninth in three contests. He fanned at least six batters in a game eight times with a career-best nine coming at Ole Miss. He swept league and national honors in consecutive weeks (March 11 and March 17) and was named to the College Baseball Foundation's National Pitcher-of-the-Year Watch List. Kuchmaner picked up his seventh win of the season (11th career) in relief against Campbell in the Greenville Regional Championship Game where he allowed just one hit over 3.1 innings in a 12-3 victory.

On Dec. 16, the Pirates garnered their first preseason national ranking of the 2020 season after being tabbed No. 36 by Collegiate Baseball. A year ago, ECU finished ranked in all six national polls (Perfect Game/No. 11, Baseball America/No. 12, USA Today/No. 12, D1Baseball/No. 13, NCBWA/No. 13 and Collegiate Baseball/No. 15) after posting a 47-18 overall record.

Under direction of sixth-year head coach Cliff Godwin, the Pirates return 17 letterwinners, including Burleson, Kuchmaner and as well as 2018 AAC All-Conference performer Tyler Smith. In all, the roster consists of 12 freshmen, nine sophomores, 13 juniors and four seniors.

Season tickets are officially on sale with packages starting as low as $120. Pirate fans have seven different options to choose from and can purchase their 2020 tickets by utilizing ECU's Online Ticket Center or by contacting the ECU Athletic Ticket Office at (252) 737-4500.

Godwin and the Pirates return to the diamond in mid-January for individual workouts before turning in their first team practice on Jan. 24th.     2020 American Athletic Conference Preseason Poll and Awards     (as selected by The American head coaches)