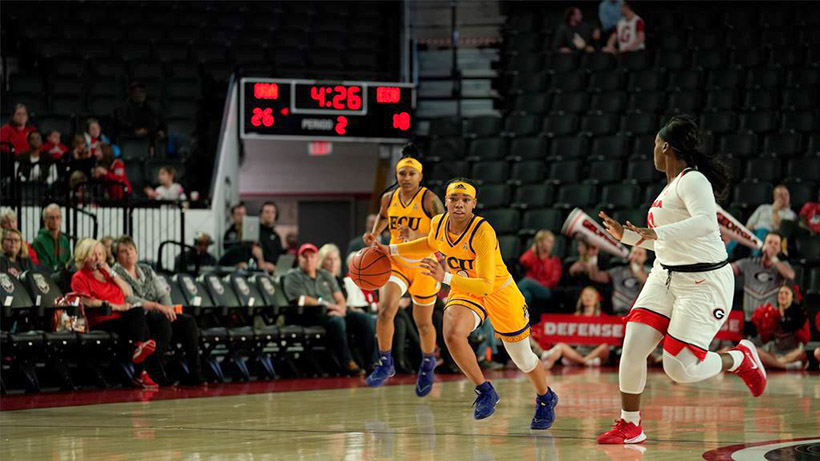 ATHENS, GA.     The non-conference portion of the schedule came to an end for the ECU women's basketball team as the Pirates fell to Georgia 67-50 on Sunday afternoon inside Stegeman Coliseum.

Lashonda Monk led ECU with 16 points, including 14 in the first half. Necole Hope also reached double-figures, finishing with 12 points. Dominique Claytor paced the Pirates on the boards, finishing with 10 rebounds as well as a pair of assists. Monk finished with four of ECU's 11 steals.

Georgia had four players score at least 10 points, led by Jenna Staiti's 14 points on 6-of-6 shooting. Que Morrison had 11 points while Gabby Connally and Javyn Nicholson had 10 points of their own. Nicholson finished with a double-double, as she also grabbed 10 rebounds.

After ECU scored the game's opening two points, the Bulldogs scored the next 12 points to take a 12-2 lead. Monk single-handedly dragged ECU back into the game, as her three-pointer ended the Georgia run and she followed it with consecutive layups. Georgia answered with four straight points to push the lead to 16-9, but consecutive field goals from Hope and Monk followed by a free throw by Taniyah Thompson made the score 16-14. The Bulldogs scored the final three points of the first quarter to make it 19-14 at the end of one.

In the second quarter, Georgia was able to get to the free throw line to extend its lead. The Bulldogs shot 9-of-11 (.818) in the frame and outscored ECU 20-14. Monk had another five points in the second while Thompson hit her first three-pointer of the game to keep ECU within striking distance, trailing 39-28 at halftime. The Pirates battled the taller Bulldogs to a near-draw on the boards and in points in the paint in the first half, trailing 20-18 in both categories.

Coming out of the locker room though, Georgia used an early run to take a commanding lead. After Claytor scored the opening basket of the second half, the Bulldogs scored the next 11 points before Ryann Evans made a layup to stop the run. ECU was outscored 14-7 in the third quarter and trailed 53-35 after three quarters.

Hope kept the ECU offense afloat in the fourth quarter, scoring seven points and adding an assist. However, it was not enough as the Pirates never got closer than 17 points.

The Pirates will start AAC play on Sunday, January 5 when they head south to take on UCF in Orlando, Fla.

Head Coach Kim McNeill     On the first half     "The first half of the game is really who we are as a team. We didn't play a perfect game, but we fought and we were scrappy. We know game in and game out that we will be the smaller team on the floor so we have to be the tougher team on the floor. We have to make layups and turn people over defensively. I thought we were doing that, but we just stayed in the locker room in the second half."