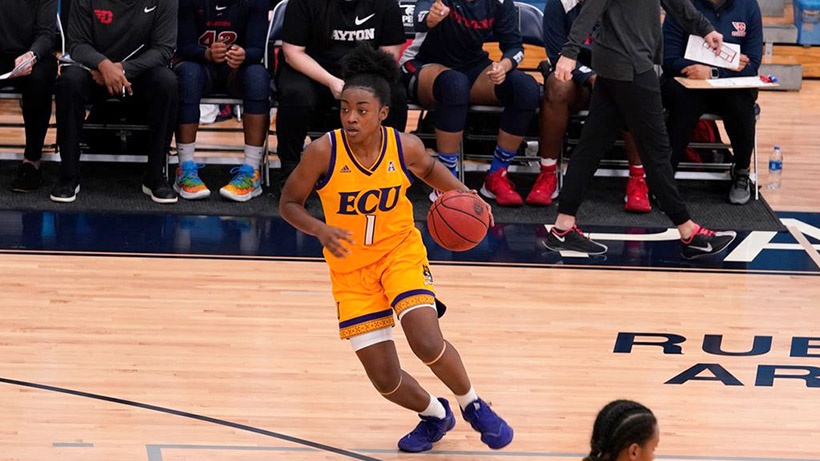 ECU was led in scoring by Taniyah Thompson who finished with a career-high 29 points, including a career-best six three-pointers and five free throws. Thompson also set a new personal-high on the boards, pulling down eight rebounds. Dominique Claytor and Lashonda Monk both chipped in 12 points with Monk dishing out six assists to go with six rebounds.

Dayton had five players in double-figures, led by Araion Bradshaw's 18. Jordan Wilmoth and Erin Whalen each had 17 while Kyla Whitehead had 16 and Jenna Giacone finished with 10. The Flyers got to the free throw line 33 times and made 31 of those tries, good for a 93.9% rate.

The first quarter was played at a frenetic pace, with both teams galloping up and down the court. Thompson got ECU started on the right foot, as she scored eight of ECU's first 10 points and helped stake the Pirates to an early 14-9 lead. Dayton went on a 9-2 run of its own though, taking an 18-16 lead at the end of the first quarter.

In the second quarter, while the ECU offense went cold, Wilmoth took over the game for the Flyers. Wilmoth scored 12 points in the frame, shooting 5-of-5 from the floor and making a pair of free throws. Only four points each from Thompson and Claytor kept the Pirate deficit from growing even larger. The score at halftime was 42-26 in favor of Dayton, while Thompson and Claytor combined for 20 of ECU's 26 points.

The third quarter could not have started much better for ECU, as Thompson came out of the locker room and knocked in back-to-back triples. However, in what would become a theme of the quarter, Dayton always had an answer. The Flyers made two straight threes of their own. Thompson once again tried to drag ECU back into the game, connecting on two more three-pointers.

When Thompson slowed down in the latter half of the third quarter, Tiara Chambers stepped up to help power the ECU offense, scoring six points of her own in the frame. But Dayton's offense always had answers, as the Flyers scored 32 points in the third, including 10 from Whitehead, and never allowed ECU to get closer than 10 points. Heading into the fourth quarter, ECU trailed 74-49.

ECU battled Dayton to a near-draw in the fourth, but it was not enough as the Flyers cruised through the final 10 minutes for the victory.

The Pirates will have eight days off for the holidays before returning to the court on Sunday, December 29. That contest will be a road game at SEC foe Georgia.