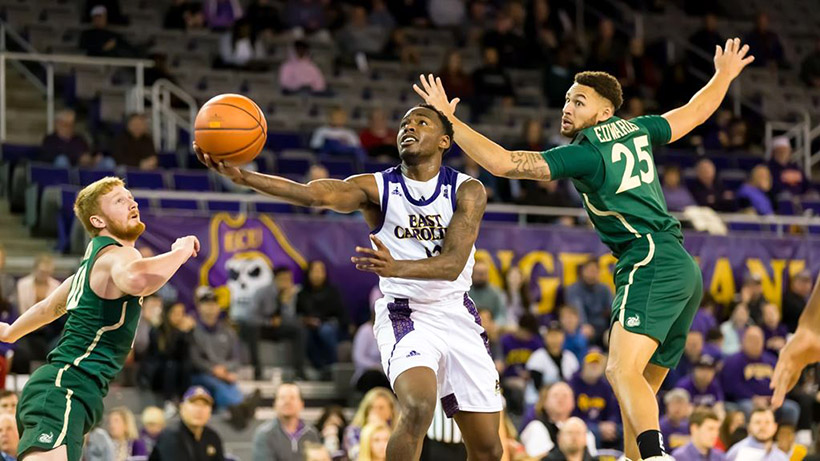 GREENVILLE, N.C.    Jayden Gardner scored a game-high 23 points and Tremont Robinson-White added 18 to lead East Carolina to a 60-56 victory over Charlotte inside Williams Arena at Minges Coliseum on Sunday.

Trailing by seven, 45-38, with 11:35 remaining, ECU (5-7) got four consecutive points from Robinson-White followed by two from Gardner to pull within one in a span of 1:24. However, the 49ers (6-5) refused to surrender the lead and held a four-point cushion with 7:56 remaining.

A minute later, Robinson-White buried a 3-pointer from the corner and Gardner scored in the paint to give the Pirates their first lead of the game with 5:14 remaining.

Gardner made four foul shots in a 20-second span before Robinson-White made 1 of 2 with four seconds remaining to seal the win.

Gardner and Robinson-White made 12 of the Pirates' 19 field goals and were a combined 16 of 27 from the foul line.

Edwards led the 49ers with 12 points.

The Pirates will return to action Saturday, Dec. 28, at home against Eastern Kentucky.

Coach Joe Dooley     Opening Statement     "That was a good team win. We played a lot better in the second half and got into a little bit of a rhythm, almost in spite of ourselves at some point down the end with the turnovers. I thought our guys showed some character and some toughness and we had five consecutive stops to wrap things up."

On Jayden Gardner     "He gets it. He'll make some mistakes like we all do, but he wants to win, and I think his game is getting better."

On Tremont Robinson-White     "He showed some glimpses today, some bursts, but he's just not back yet and won't be back for a while. ... He's basically in preseason shape right now and he's just got to keep playing."

On the Pirates' defense     "Some things I said to my guys a month ago, I think we may have gotten frustrated by not getting stops, I think our resolve on the other end if we didn't score is if they didn't score they can't beat us, I thought we did a nice job. I thought we fought the drive a little bit better tonight, and I do think there was some maturity last couple of weeks."