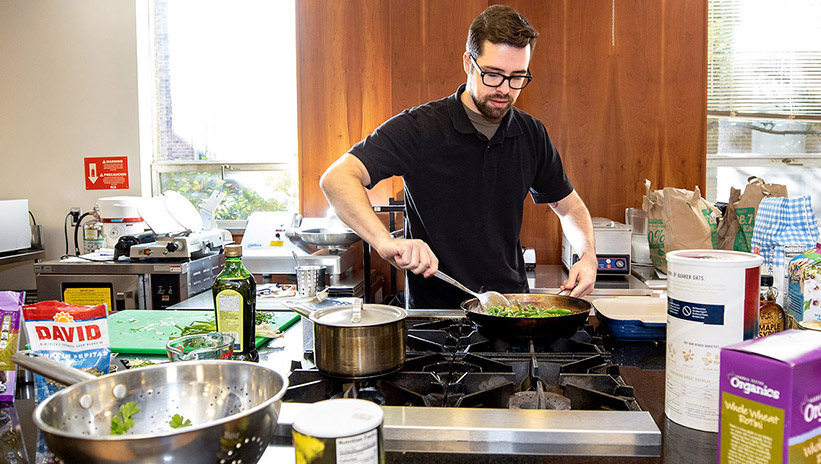 While turkey or ham has traditionally taken center stage at holiday meals, some families may find that their students transitioned to a plant-based or meatless diet over the fall semester.

"The trend to decrease meat consumption, whether a total lifestyle change or meatless Mondays, is on the rise," said Dr. Michael Wheeler, chair and professor of the Department of Nutrition Science in the College of Allied Health Sciences. "The consensus is that reducing meat intake with a plant-based diet would be a more healthy approach."

Defining the lifestyle can be tricky. Some follow a strict diet of no animal products including meat, dairy, eggs or seafood. Others may eat dairy and eggs. Pescatarians eat seafood but no meat. There are some who follow a vegetarian diet with the occasional cheat (meat), said Wheeler.

"There is so much nostalgia with Thanksgiving and Christmas," said Cefalu, a chef with a culinary arts degree from Johnson & Wales University and seven years' restaurant experience followed by military service. "People can still enjoy the foods they like."

Deena Kayyali of Raleigh, a junior majoring in nutrition and dietetics, has been a vegetarian for three years. "At first, it was for health reasons and then it became more about animals." She had already cut out most dairy products when she started asking her mother to put meats on the side when she was at home. "She respected me. And I started cooking for myself," Kayyali said. "Being in school, I've found simple ingredients are best. I eat a lot of fresh vegetables and fruit."

How can families manage the potential stress of catering to non-meat eaters at Thanksgiving and Christmas? 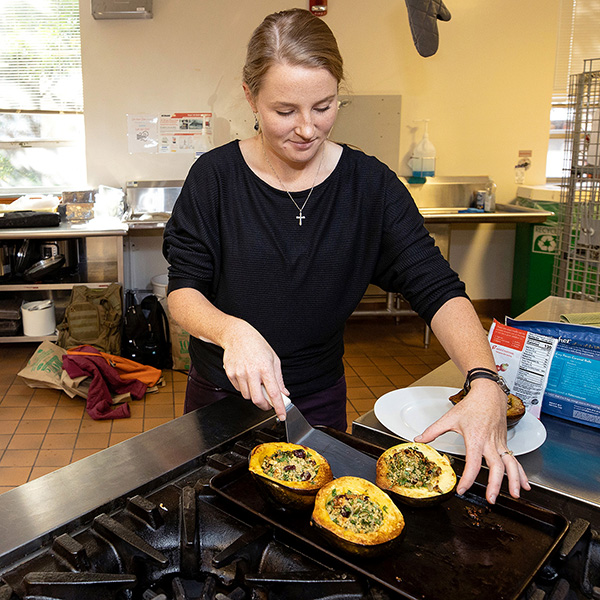 Shay Ernest, a nutrition and dietetics major, pulls vegan quinoa-stuffed squash from the oven.
"If they're communicating with their parents ahead of time that this is something that they've transitioned to and is important to them, then it might give the family time to plan or allow for variation in the menu," Britton said. "I think issues come up when it is sort of sprung on people at the last minute and the meal has already been planned or prepared. So it comes back to communication."

And if families don't want to embrace a vegan diet, that's OK. "The student can be prepared to bring something separate for themselves," Britton said. "The same way that they would like for their family to respect their dietary change, they can respect that their family does not want to change theirs."

Regardless, people are seeing more vegetarian options in the grocery aisles and even fast-food restaurants. "There is so much more opportunity now. Ten years ago, you were buying a lot of processed foods," said Tara Wind, clinical assistant professor of nutrition science and dietetic internship director. "A lot of foods are naturally vegan and always have been."

Getting people to try new foods and healthier ways to cook is the aim of a grant-funded cooking class taught by the ECU nutrition science department at the Pitt County Senior Center.

Students Cefalu, Ernest and Rafailia Vogiatzis are hoping to dispel myths about healthy cooking: that it's expensive, hard to do, or doesn't taste good. Cefalu said they've taught older adults how to make some meals for as little as $2 per serving.

"These are people who grew up eating traditional, Southern food," Wheeler said. "We're trying to shift some of those cooking behaviors."

Cefalu said the group has been receptive. "It's us coming to them. We find them where they are," he said. "It's our way of getting out into the community."

Rob Spahr contributed to this story.