The ECU women's basketball team will head down to the West Palm Beach Classic for a pair of games before the holidays. The Pirates will open the tournament on Friday afternoon as they take on Northwestern at Keiser University. east carolina university, ECU, gameday, palm beach classic, northwestern, women's basketball, december 19, 2019
Home
Categories
Login 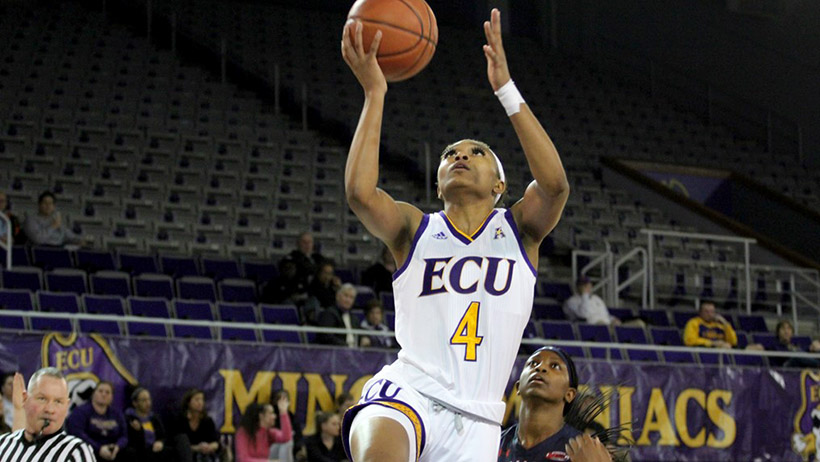 GREENVILLE, N.C.     The ECU women's basketball team will head down to the West Palm Beach Classic for a pair of games before the holidays. The Pirates will open the tournament on Friday afternoon as they take on Northwestern at Keiser University.

ECU (3-7) will be trying to snap a three-game losing streak after falling to Howard at home. The Pirates continue to rely on their defense to produce offense. ECU is ranked second in the nation in both steals (148) and steals per game (14.8) while it is also third in both turnovers forced per game (26.7) and turnover margin (+10.6). In all three of their wins this season, the Pirates have scored at least 21 points off turnovers. Lashonda Monk leads the team and is eighth in the AAC in scoring, averaging 15.1 points per game. Taniyah Thompson is also scoring in double-figures, averaging 11.1 points. On the defensive end, Monk is fifth in the country in steals, with 38 while Dominique Claytor is ninth, grabbing 35 steals. Necole Hope has had one of the best scoring stretches of her career over the past four games, averaging 10.8 points and shooting 47.5% from the field. Since the game at Longwood, ECU has had just seven healthy players, leading to Monk (35.8 mpg), Claytor (37.0) and Thompson (34.2) all averaging more than 34 minutes per game in that span.

Northwestern (8-1) has had an impressive start to the season, with the Wildcats' only loss coming to then-No. 16 DePaul. A key to Northwestern's early success has been the team's defense, as the Wildcats are allowing just 50.3 points, the seventh-best mark in the country. Northwestern is also in the top-10 of the NCAA in turnovers per game (sixth), giving the ball away just 11.3 times per game and in assist-to-turnover ratio (second, 1.69). Lindsey Pulliam is third in the Big 10 in scoring, averaging a team-high 18.1 points. Abbie Wolf (11.7 ppg) and Abi Scheid (10.7) are both averaging double-figures as well. Veronica Burton leads the Big 10 in steals per game, averaging 3.56 and is third in assists per game, dishing out 5.9 per game. The Wildcats are currently receiving five votes in the Top-25 Coaches Poll, making them the first ECU opponent this season to receive votes in the national polls.

It will be just the fourth meeting between ECU and Northwestern, all of which have come at a neutral site. The then No. 19 Wildcats earned a 78-75 in Austin, Texas in November 2015 despite 27 points from I'Tiana Taylor. Current graduate assistant coach Alex Frazier played 19 minutes in the contest for the Pirates. The two schools also met twice in the 1980's. Northwestern took a 78-70 win in Miami, Fla., in December 1981 while ECU claimed a 63-62 win in Queens, N.Y., in December 1980. Against current Big 10 opponents, the Pirates have an all-time mark of 3-7, with one win apiece over Michigan State, Northwestern and Wisconsin. The most recent win was that triumph over the Badgers in 2014 while the 2015 loss to Northwestern is the most recent contest. That 3-7 record includes one of ECU's two NCAA Tournament appearances, as ECU lost to Rutgers in the 2007 postseason tournament, although the Scarlet Knights were still in the Big East at the time.

Tipoff is scheduled for 2:30 p.m., on Friday afternoon at Keiser University's Massimino Court. Fans can stream the game or follow the live stats HERE.