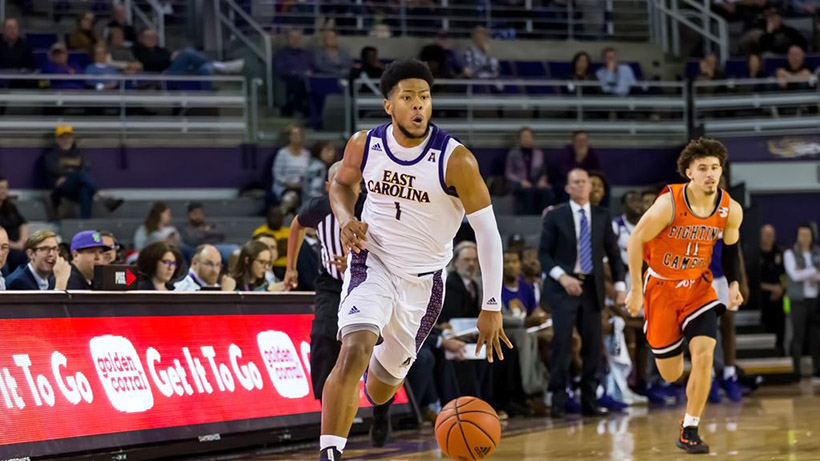 GREENVILLE, N.C.     Sophomore Jayden Gardner finished with 22 points and 13 rebounds for his fifth double-double of the season and East Carolina rolled to a 71-57 victory over Maryland-Eastern Shore on Tuesday night.

Freshman Brandon Suggs added the first double-double of his career for the Pirates (4-7), totaling 10 points, 10 rebounds and six assists.

The Pirates stretched their lead to 20 in the first five minutes of the second half, but the Hawks used a 12-3 run to cut their deficit to 11, 46-35, with 13:09 remaining. ECU scored eight unanswered, including the first four from Gardner, to extend their lead back to 19 with 9:41 remaining.

AJ Cheeseman's 3-point play brought UMES back to within 11 following the under-4 media timeout (3:54), but the attempted comeback ended there.

Cheeseman came off the bench to hit 5 of 7 shots from the floor and all five of his free throws, scoring 15 for the Hawks (1-11). UMES starters combined to score 19 points on 9-of-31 shooting.

Newton's steal and subsequent dunk gave ECU a 17-point cushion with 1:17 remaining to ensure the Pirates' a victory over UMES for the second straight season.

Head Coach Joe Dooley     Opening Statement     "We were pretty pleased with the start from our defensive effort and did some nice things, but thought we were a little sloppy with the ball in the first half. Then I thought the second half, our defense was bad. I thought we took our foot off the gas to begin the half and that's disappointing, because we have practiced better and done some things. But I thought the effort in the second half and our ability to guard, and our competitiveness in the second half wasn't where it needed to be for a 40-minute game."

On the positive takeaways from the game     "I thought our defensive intensity to start the game was good. We're weren't giving up anything, we were contesting; even when we made mistakes we scrambled around."

On freshman Brandon Suggs' performance     "I think he's got a high basketball IQ. I think he understands things. I think he pursues the ball. I think he's going to keep getting better and better. I think he needs to continue to be aggressive and we talked about it the other night, he and Tristan (Newton) are both really just 'strength' away from being good players."

On the status of senior Seth LeDay     "Seth and I met today, and he won't be a part of the program going forward. We wish him all the luck and will do all that we can to help him."

Freshman Brandon Suggs     On building momentum after consecutive wins     "It feels good because of all the work we put in. I feel like its showing, so we just need to keep working and try to get our third one on Sunday."

On nearly getting a triple-double     "I'm just doing everything my team needs; getting the boards and passing to the open man."

Junior Bitumba Baruti     On getting acclimated to the program     "For me, it's just getting more comfortable with my teammates and myself on the court. I think I'm getting there.