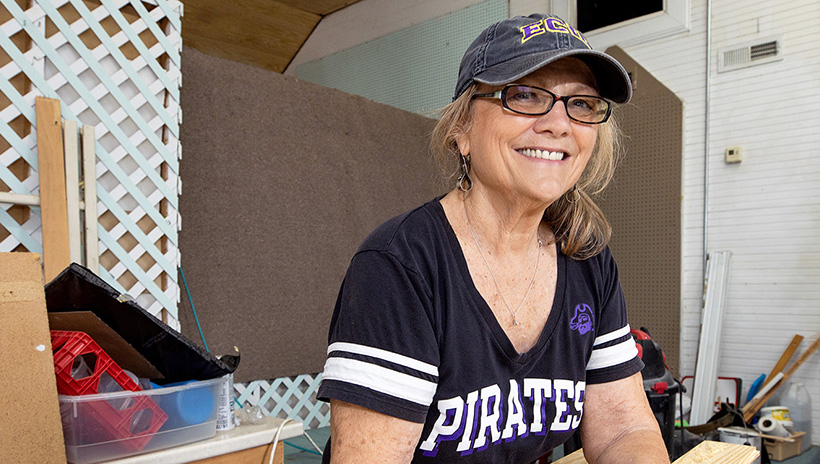 Sherry Thurston stands in her Sneads Ferry art gallery as it was undergoing interior repairs earlier this year. The gallery reopened after Thanksgiving. | Photos: Rhett Butler

Years ago, Sneads Ferry artist Sherry Thurston '70 drew a pair of white rubber boots - the kind local shrimpers and anglers wear - called the drawing "Sneads Ferry Sneakers" and had T-shirts made with the image to sell at the coastal town's annual shrimp festival.

"I had people banging on my door at 11 o'clock at night wanting shirts," she said.

Last year, it was Hurricane Florence doing the banging. Thurston's home fared pretty well, but her gallery next door in the old Original Free Will Baptist Church didn't.

"It rolled up the tin on my building the very last day it was here terrorizing people," she said. 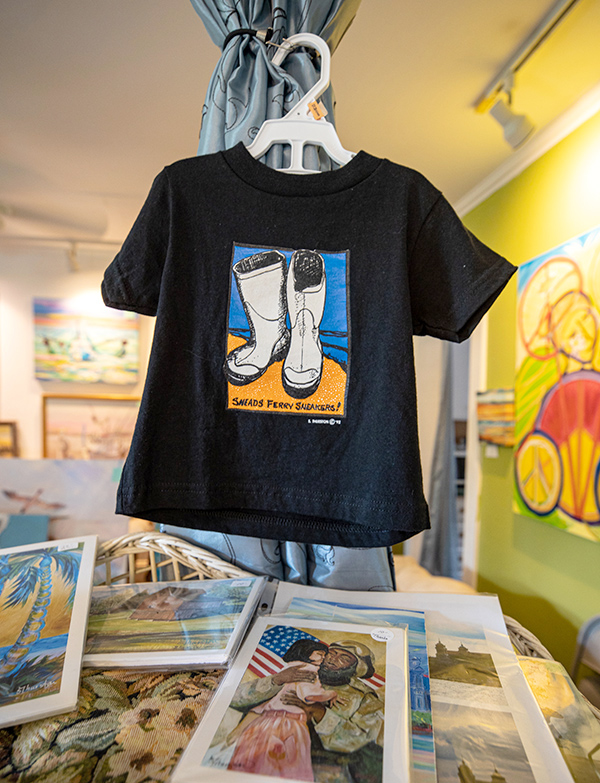 “Sneads Ferry Sneakers” T-shirts have been popular through the years.
But help was on the way. Friends and neighbors helped her empty the gallery of its artwork and other contents and move them into her home, where she set up a temporary business. Not long after, Jason Grote, one of her former students at Dixon High School in Holly Ridge, drove by. He had moved to Florida and started a roofing business but still traveled back to Sneads Ferry on occasion. He spotted the damaged roof.

"I figured it would probably be an easy job my crew could knock out pretty quick," he said. Thurston had already bought the materials, so Grote and his team spent three days installing the new roof for a fraction of his normal rate.

A couple of other former students, Sophie and Abbie Koronek, helped her clean up. Other crews worked on interior repairs, a church group worked on landscaping, and after more than a year of work, Thurston reopened the gallery earlier this month.

"When you have friends that do this for you, it's truly amazing," Thurston said in a Dec. 3 article in the Jacksonville Daily News.

Thurston is a longtime resident of the area. As an ECU senior in 1970, she was Miss Onslow County. Later, she set up a portrait-painting business, traveling to area shopping malls to work. One day in Goldsboro she painted 16 portraits.

Living near Camp Lejeune, Thurston has been inspired by the military in her work. In 1981, she was driving along N.C. 210 in Onslow County when she came across a group of Marines waiting near the road after rifle range training. They were from the 24th Marine Amphibious Unit. 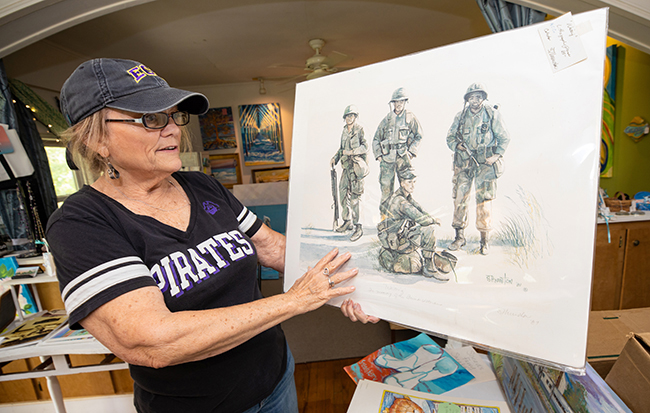 Thurston holds a print of her painting, “Waiting,” which shows members of the 24th Marine Amphibious Unit.
She stopped, got out and asked their commanding officer, Lt. William Zimmerman, if she could photograph his troops. He agreed. She made a painting of one of the photos showing four Marines - three standing, one sitting on his rucksack.

"They'd been out probably since before dawn," Thurston said. "I didn't know their slogan was 'hurry up and wait,' and I called it "Waiting."

You might have heard of the 24th. Their barracks were attacked in the 1983 Beirut bombing. Zimmerman was killed. Later, his family found Thurston's name and studio number among his personal effects. His sister contacted Thurston, and in 1988, they established the Thurston-Zimmerman Scholarship at Coastal Carolina Community College funded by sales of the print.

Grote recalled his days in Thurston's art classes. "She was great," he said. "We just kind of grew up with her as the art teacher. I was really into that class. It wasn't just art. It was pottery and a lot of cool stuff. She was a real cool teacher."

"You can't retire when you're an artist," she said.