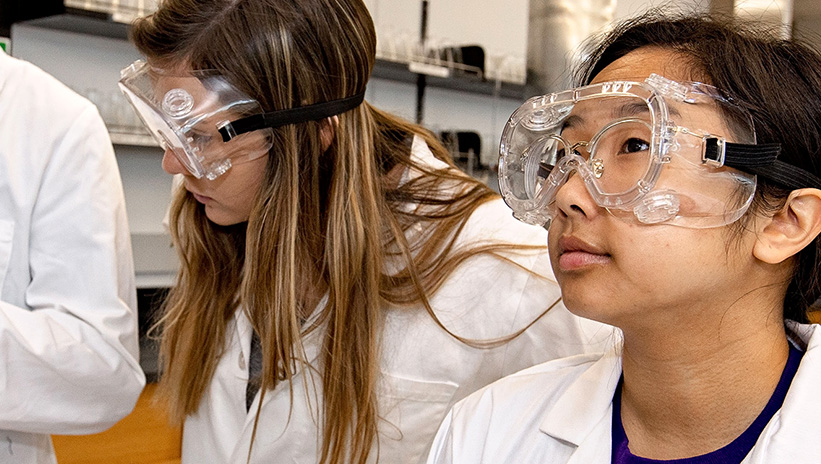 From the elevator, turn left down the hall and take 20 paces. Turn left again, and X marks the spot where Pirates are learning science in East Carolina University's new, more effective laboratory classes.

X-Labs is a cross-disciplinary project aimed at changing the way scientific experimentation is introduced to students in lab courses in chemistry, biology and physics.

For decades, science labs have looked the same. 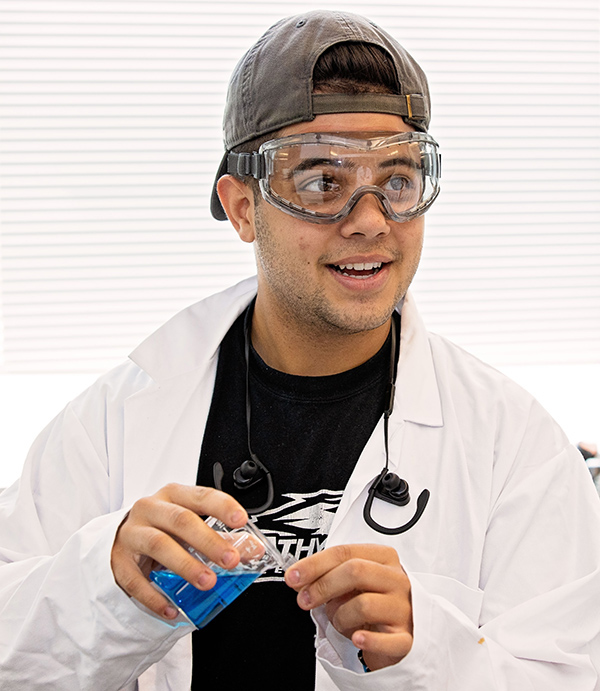 Laith Hamed prepares a solution in an experiment to reverse engineer purple dye.
"You give students prescriptive, cookbook, scripted labs where they're told, 'Add 3 milliliters of this, add one drop of that,' and oh look, it turned blue," says Dr. Joi Walker, assistant professor of chemistry. "Believe it or not, those are not in any way valuable in terms of education."

In the newly redesigned labs, based on the Argument-Driven Inquiry (ADI) model, the experiments are based on a guiding question. In small groups, the students design and conduct an experiment to answer the question, present and defend their results to other groups, and write a lab report. Walker says the process better prepares students for actual scientific research and makes more efficient use of valuable class time.

"The laboratory is an integral part of science education," she says. "It's a three-hour block of time, we have amazing facilities, you have an inherently small student-to-teacher ratio, and so some of what I'm trying to do is use that time to do things that we can't do in class - like writing, like presentations."

Rather than focusing on following a prescribed set of steps to get the right result, the emphasis is on learning how to use experimentation to answer a question, as well as developing the ability to explain and justify the results. The inherent messiness of having students design their own experiments is part of the beauty of the ADI model, Walker says.

"It gives them an opportunity to see, 'Oh, we got different results. We got a different outcome. Our answer may not be exactly the same as someone else's.' And that's science," she says. "I would rather a student be able to justify and explain what went wrong. That's when you really understand it."

One of the challenges of developing the curricula for the labs, she says, has been coming up with questions that are answerable, but not easily answerable, because if all the students get the same answer, there's little room for discussion and argumentation.

In a chemistry lab on measuring the concentration of chemicals in a solution, rather than simply following a set of steps to get a single answer, the students are given a scenario in which they need to produce Pirate purple dye for a sports drink. By analyzing samples, they reverse engineer the dye to calculate its contents and determine how they would make more.

"I didn't tell them how to set it up," says Dr. Eli Hvastkovs, associate professor of analytical chemistry. "They have to set up the lab themselves - lay out a plan and write a proposal. The idea is for them to explore on their own, collect data and come up with an argument that answers a question."

Chemistry major Victoria Preston says the process is more engaging for students compared to non-ADI labs. Working in groups helped her see different perspectives and allowed an opportunity to bounce ideas off each other, she says. The peer review of lab reports was also a benefit. 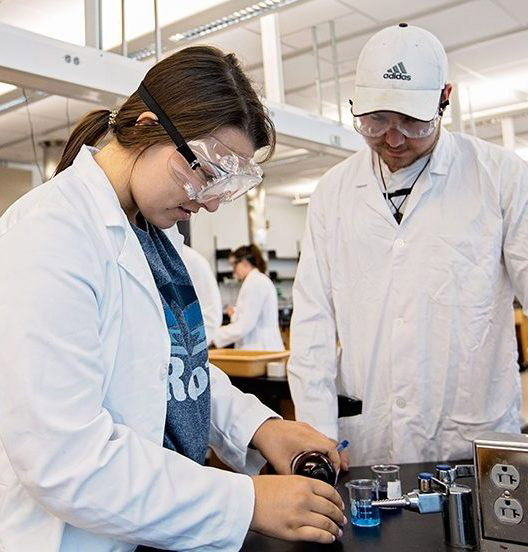 Redesigned labs in chemistry, biology and physics are using the Argument-Driven Inquiry model. Here, Sophia Villani works to determine the composition of a solution.
"It was a great way to understand the material better," she says. "Reading other people's papers helped me see a different point of view of the experiment. Some people understood certain parts of the experiment better than others, so reading over everyone's papers helped piece together parts that I was less confident on."

Preston, who plans to attend medical school, says the two ADI labs she's taken helped her build confidence in her research skills and learn how to work as part of a team while still thinking independently.

The students are getting exposed to the same concepts, techniques and skills as in a traditional lab, but the process can take a little longer using the ADI model, Walker says. "Nobody ever said you have to do a different experiment every week. It's not written anywhere. Slow down. Use that lab time to do more."

Setting up labs with a consistent format across disciplines means students know what to expect from lab courses once they've had one, whether it's in chemistry, biology or physics.

"We are seeing that this consistency really helps them to learn how to process and communicate the science they are learning in a meaningful way," says Dr. Kris Callis-Duehl, assistant professor of biology.

Lindsey Clevenger, a biology major who has taken labs in both formats, says every lab should follow the ADI model. "Even though the labs are more challenging than traditional labs, they force students to expand their minds and create a better understanding of science. This will better prepare students for their future," she says.

Clevenger describes her first impression of the ADI lab format as eye-opening. While the instructions in traditional labs weren't hard to follow, she says, she felt as though she wasn't learning anything from them.

"By designing my own experiments (in ADI labs), I took a better understanding to how concepts in science work together," she says. "By receiving feedback from my peers, I learned how to look at concepts in science from different perspectives and correct my mistakes."

Students aren't the only ones with positive feedback on the ADI model. Walker says a faculty member with 17 years of experience told her that the first time he taught an ADI lab was the first time it felt like he taught real science.

"Science identity is key to retention of STEM majors. Even a student who’s a C student, if they identify and feel like they can do science, they will stay in science."
— Joi Walker, assistant professor of chemistry

The X-Labs team, which includes principal investigators Walker, Callis-Duehl and Dr. Steven Wolf, assistant professor of physics, is tracking the impact of the new lab model on student success and retention as part of a three-year, $598,000 grant from the National Science Foundation. The study already includes more than 1,200 students.

"Science identity is key to retention of STEM (science, technology, engineering and math) majors," Walker says. "Even a student who's a C student, if they identify and feel like they can do science, they will stay in science. We were pretty excited to see that after just one semester, we saw a shift in identity, a positive shift in science identity.

"That is really exciting, and I think that's due to the fact that they're actually getting to do science and see how science works. It gives them a more authentic science experience."

Initial results also show significant improvement in the students' ability to engage in argumentation and in writing ability. Walker says the study will provide statistical analysis that will not only show the overall benefit of the program, but also breakdowns of which students benefit the most and how different groups of students benefit from the improved lab model.

"We want students transferring in to have had the same experience, and to be able to move into the research courses seamlessly just like we're trying to do with the ECU students," Walker says.

"X-Labs is an amazing new curriculum for ECU and puts us at the cutting edge of preparing our students for engagement with research," says Callis-Duehl.

X-Labs is part of ECU's STEM Collaborative for Research in Education (STEM CoRE), a multidisciplinary team with the goal of improving pre-K-12 education in eastern North Carolina, increasing the workforce and improving education research. Other STEM CoRE initiatives include the ADESSA project, focused on the impact of gender on group work; and ChemCURE, which is aimed at getting students involved in authentic research in a course laboratory setting.