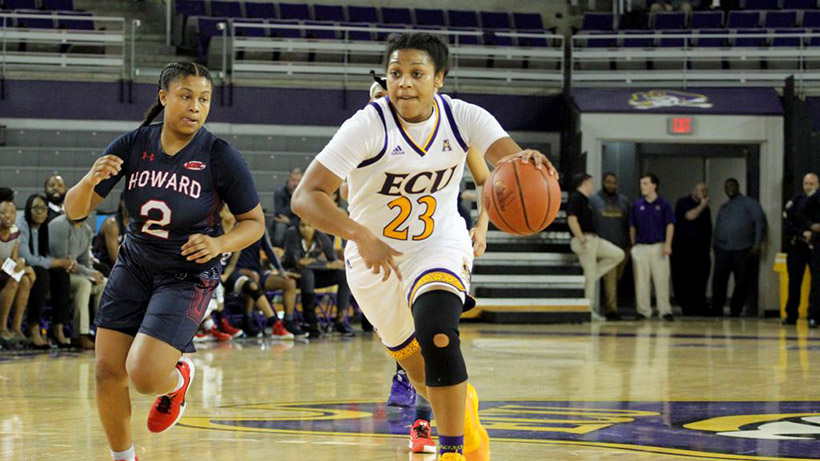 Greenville, N.C.     In its final home game of 2019, the ECU women's basketball team fell to Howard 67-51 on Monday night inside Minges Coliseum.

ECU drops to 3-7 on the season and has lost three straight. Howard wins its third straight game and is now 7-4 this year.

The Pirates were led in scoring by Necole Hope, who finished with 13 points on 6-of-11 shooting while also grabbing five rebounds. Dominique Claytor finished with a team-high seven rebounds, eight assists and six steals. Lashonda Monk and Katerina Tsineke each had nine points for the Pirates with Monk adding four steals.

Howard had three players score in double-figures, led by Sarah Edmond's 17 points. Gia Thorpe added in 15 points of her own while Krislyn Marsh had 12 points. Edmond also led the Bison in rebounding, grabbing nine rebounds as did Brooklyn Fort-Davis while Iyanna Warren handed out nine assists.

The first quarter was dominated by ECU. After the two teams traded buckets for the first four minutes, Howard led 8-7 after an Edmond layup. However, for the final 5:48 of the opening period, the Bison could not score another point. In that span, ECU rattled off a 10-0 run to take a 17-8 lead after one quarter. Ryann Evans had seven points and five rebounds in the opening 10 minutes while the Pirates forced nine Howard turnovers.

The early part of the second quarter was more of the same, as a Taniyah Thompson jumper followed by a fastbreak layup by Hope put ECU up a commanding 21-8. Unfortunately for the Pirates though, their offensive opportunities dried up while the Bison offense began to come alive. ECU managed just seven points over the final 7:41 of the second, while Howard ended the half on a 16-7 run to cut the deficit to just 28-25 at the break.

Howard tied the game just 27 seconds into the third quarter on a three-pointer. After the two teams traded the lead back and forth, a Tsineke layup with 3:44 remaining in the third tied the game up at 37-37. That was when Howard threw the knockout blow. The Bison scored 11 of the game's next 12 points, six of which came from Thorpe to take a 49-38 lead at the end of the third quarter.

ECU briefly had a lifeline in the fourth as Hope went on a 4-0 run of her own, cutting the deficit to seven. But that was as close as the Pirates got, as back-to-back three-pointers by the Bison moved the lead to double-digits once again.

The Pirates will be back in action for a neutral-site tilt on Friday afternoon as ECU takes on Northwestern in the West Palm Beach Invitational. Tip-off is scheduled for 2:30 p.m., at Keiser University.

Head Coach Kim McNeill     Initial Thoughts: "They outplayed us on every end of the floor. They wanted it more than we did. They executed the game plan that they had much better than we did, so kudos to them, they deserved to win. We didn't deserve to win tonight."

On the hostility between the two teams: "We talk about it all the time, you're going to hit adversity and we've hit it a lot this year. We've got to keep our cool. That's not the way to finish out a game. If somebody kicks your butt, they kick your butt. You got to take it and move on. We have to learn how to control our emotions and play a smarter game."

Junior guard Necole Hope     On the fatigue from having only seven players: "Well for us, since its only seven people, we try to work on that throughout practice all the time. Fatigue's going to set in eventually, if not right away, for us so we just have to push through it. There's no excuse for fatigue."