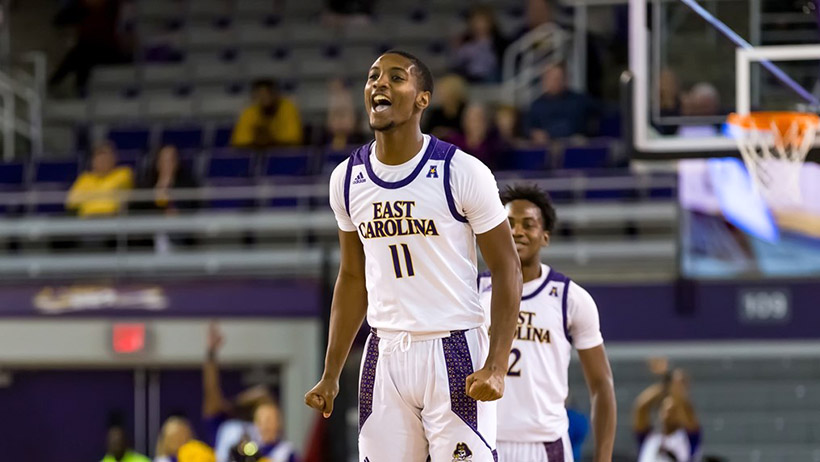 GREENVILLE, N.C.     After snapping a four-game losing streak Saturday versus Campbell, East Carolina will look to make it two in a row when the Pirates host Maryland - Eastern Shore on Tuesday, Dec. 17, at 7 p.m. inside Williams Arena at Minges Coliseum.

The Pirates defeated the Hawks at home last season, 70-47, and received 22 points and eight rebounds from Jayden Gardner in addition to 10 points from Seth LeDay. ECU outrebound UMES by 14 and held them to 32.0 percent shooting.

"[UMES] play a lot of guys," ECU Head Coach Joe Dooley said. "They're experienced. They've been on the road and seen a lot of things. They do change defenses, so we'll have to be ready for that. They just won a game last week. Confidence is a weird thing as we all know, so I'm sure they'll come in very confident."

The Pirates are in the midst of a five-game homestand and broke through with their first victory since before Thanksgiving Saturday with four players scoring double figures.

ECU held the Campbell to just 67 points, the fewest it has allowed since limiting Navy to 62 points in the second game of the season and its opponent to less than 40 percent shooting for the first time in five games.

Gardner leads the American Athletic Conference in scoring (19.9 ppg), ranks third in field goal percentage (.579) and is fourth in rebounding (8.6 rpg). Junior Tyrie Jackson (11.3), Suggs (11.0) and Tremont Robinson-White (10.0) are also averaging double digit points per game for the Pirates, who have scored 75 or more points in each of the last three games.

UMES picked up its first win of the season nine days ago with a 85-39 win over Clarks Summit after opening the season with 10 consecutive losses, which included trips to Penn State, Liberty, Stanford, Oklahoma and Baylor.

Canaan Bartley (7.8), Ty Gibson (7.6) and Da'Shawn Phillip (7.4) are each averaging more than seven points per game to leads the Hawks.