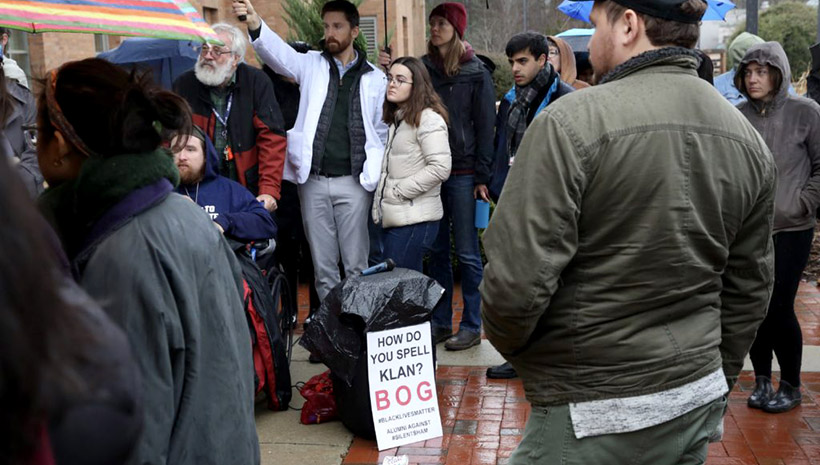 Protesters opposing the deal turning Silent Sam from UNC to the Sons of Confederate Veterans stand in the rain outside the system's office Friday, Dec. 13. | Photo: Don Carrington

The University of North Carolina System's Board of Governors has a transparency problem. Again.

This time, the board's secretive handover of Confederate monument Silent Sam to the controversial Sons of Confederate Veterans organization has drawn public ire and scrutiny.

A November deal with SCV, announced the day before Thanksgiving, took place behind closed doors and without a vote of the full board. Some members still haven't seen the paperwork, Carolina Journal has learned.

It's not the first time the BOG has been dinged for poor optics. In 2016, former UNC President Tom Ross was fired under opaque circumstances. That uproar leaked into the administration of Margaret Spellings, the former UNC president who resigned in October 2018. Spellings, however, sought to boost transparency in board dealings by instating video broadcasts and public comment sessions at board meetings. She also held regular meetings with the press.

When UNC interim President Bill Roper took over the job in January, he also cited a need for transparency across the system. But after months of controversy and critical news reports surrounding board politics, barriers are thickening. At the board's November meeting, the usual news conference was canceled. At another meeting Friday, Dec. 13, Roper was the only person physically present. He declined to answer questions from the media.

About 80 protesters either filled the meeting room or lined up outside the building Friday, carrying signs and chanting slogans opposing the deal.

On Nov. 27, the BOG's governance committee voted to give Silent Sam, which stood on the UNC Chapel Hill campus for more than a century before protesters tore it down in 2018, to the SCV. To top it off, the board doled out $2.5 million in a trust fund, reportedly to pay for the statue's preservation and display. 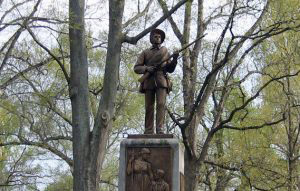 Later reports revealed the terms of the deal were struck as part of a lawsuit settlement between UNC and SCV. Silent Sam was removed illegally from its perch, violating a 2015 state law requiring the N.C. Historical Commission to approve relocating historic monuments or artifacts. The statue was toppled by protesting vandals in August 2018; its pedestal removed in January by an order of outgoing UNC Chapel Hill Chancellor Carol Folt.

The parties reached an agreement even before court documents were filed in late November. Greg Doucette, an attorney and former BOG member who noted the odd timing of the lawsuit, has used social media to challenge the deal's legality.

The $2.5 million check was instantly paid to the Confederate group after a small group of BOG members gave the deal a green light, CJ learned.

Now, some on the board are left scratching their heads, trying to figure out what happened. And if some of the university's leaders are confused, the public is downright baffled.

"The university system and campuses have a history of not being as transparent as I would want them to be," board member Marty Kotis told CJ after the Dec. 13 board meeting.

During the meeting, held by telephone in Chapel Hill, Kotis was the first to voice concerns over the deal with SCV. BOG members were originally assured the money attached to Silent Sam's hand-off would be spent only on things like statue repairs and restoration, Kotis said. But a letter from Kevin Stone, the leader of SCV, indicates other plans for the cash.

"As part of that settlement, what we've ended up with is legal possession of Silent Sam, and over $2 million in a dedicated trust (that we requested) for the perpetual care of Silent Sam and the purchase of land on which to prominently display him, to build a museum for the public, and to build a Comprehensive Division headquarters for the benefit of the membership," Stone wrote in a letter to members of his organization. Doucette published the correspondence on Twitter.

With the money now in SCV's hands, it's nearly impossible to tell how it's being spent, Kotis said. If lawyers representing UNC got the deal wrong and included language that allows SCV to build headquarters or fund rallies, he said, "heads should roll."

"I'm not looking to armchair quarterback," Kotis said. "I believe [the governance committee's] intent was to solve the problem, and no one is going to walk out of this situation happy."

"We believe the document prevents them from spending the money. Only time will tell. The interpretation is the key."

Still, full details and terms of the deal haven't been made public.

During Friday's meeting, board members mentioned an impending dump of public documents that would shed light on UNC's agreement with the confederate organization.

While that sunlight might be good, it's coming a little late.

The board's decision to discuss Silent Sam behind closed doors is questionable under state open meetings law, said Brooks Fuller, director of the N.C. Open Government Coalition at Elon University. The coalition's purpose is to educate the media and public about transparency in public policymaking.

Closed session meetings under the attorney/client privilege exception are allowed only if members of the board are receiving legal advice, Fuller said.

Most board conversations about Silent Sam have happened in private. But it's hard to tell if the BOG broke the open meetings law, since minutes of closed session meetings often don't outline topics discussed.

Unfortunately, open meetings laws can be tough to enforce, Fuller said. In this case, a lawsuit may be the only recourse, he added.

On Dec. 11, the Lawyers Committee for Civil Rights Under Law, a civil rights group, sent a letter to the board. The settlement reached by members wasn't legal, the letter stated, and leaders should take any actions "necessary to protect UNC's interests and to recover the $2.5 million dollars dedicated to paying that judgement."

"Openness is the default, not the exception," said Fuller. "And I'm very afraid that when it comes to this particular lightning rod issue of Silent Sam, [the board] made openness the exception rather than the default. And that should be very easy to correct."

For now, the board continues using attorney/client privilege to shield Silent Sam from public view.

When Kotis asked about the $2.5 million trust fund during the Dec. 13 board meeting, UNC's lawyer, Tom Shanahan, was quick to say the matter should be discussed in closed session.

Kotis later told CJ he was confused about why that would be a closed-session item.

CJ reached out to multiple board members for more information about closed-session discussions of the Silent Sam deal, including David Powers, chairman of the governance committee. We received no immediate response.