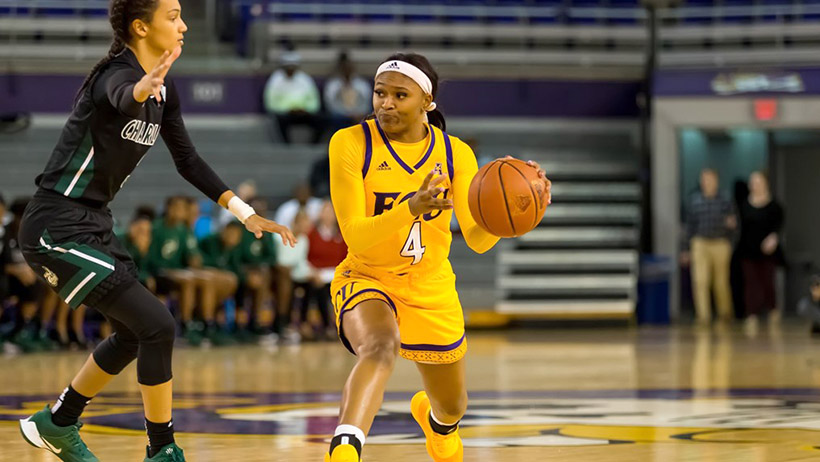 GREENVILLE, N.C.     After a 13-day layoff, the ECU women's basketball team is back in action on Monday night as the Pirates play host to Howard.

ECU (3-6) will be happy to be back home after going 1-2 on a three-game road trip. The Pirates beat Longwood 64-61, before falling at Wake Forest and Liberty. Lashonda Monk continues to lead the Pirates in scoring, with her average of 15.8 points per game placing her eighth in the AAC. She leads the conference and is fourth in the country in steals, racking up 34 already to give her 225 for her career, the fourth-highest total in ECU history. As a team, the Pirates are third in the country in steals and steals per game, averaging 15.1 each night. Dominique Claytor joins Monk in the top-15 in the country in takeaways, as she has 29 already this season. Claytor has stepped up on the boards in the absence of ECU's leading rebounder, Raven Johnson, who has missed time due to injuries. Claytor has grabbed 7.2 rebounds over the past five games, including a career-high 11 at Longwood. Three freshmen have also been playing significant minutes. Taniyah Thompson is averaging 11.9 points this season and 4.7 rebounds. Ryann Evans started slow, but is averaging 10.3 points and 3.7 steals since moving into the starting lineup against Longwood. Katerina Tsineke missed the first four games of the season, but has since averaged 6.0 points and made at least one triple in her past four games.

Howard (5-4) will be playing its second game of the weekend when the Bison arrive in Greenville as they are scheduled to host Niagara on Saturday. Howard most recently beat Fairleigh Dickinson 64-56 to snap a two-game losing streak. Three Bison are scoring in double-figures, led by Sarah Edmond (14.2 ppg). Jayla Thornton is averaging 13.3 ppg and is a threat from behind the arc, as she is 18th in the nation with 28 made three-pointers. Howard's defense thrives on rejecting shots, as the Bison are 29th in the NCAA with 4.9 rejections per game. Imani Bryant and Jayla Myles each have 15 blocks to lead the team. Despite those blocks, teams have been able to score effectively against Howard, as the Bison rank 280th in the country in scoring defense, allowing 70.6 points per game.

ECU leads the all-time series between the two programs 5-1, but Monday will be the first time the Bison and Pirates have met since 2002 and just the second time since 1989. The Pirates have won all three contests played in Minges Coliseum, the last being an 87-68 victory in 1989. Howard will be the second MEAC opponent on ECU's schedule this season, after the Pirates defeated Maryland Eastern Shore 57-42 on Nov. 23. ECU is 49-12 against MEAC opponents in its history, including 34-4 at home.

Tipoff is scheduled for 7 p.m., on Monday night inside Minges Coliseum and fans can buy tickets HERE. Pirate Nation can also stream the game HERE or follow the live stats HERE.