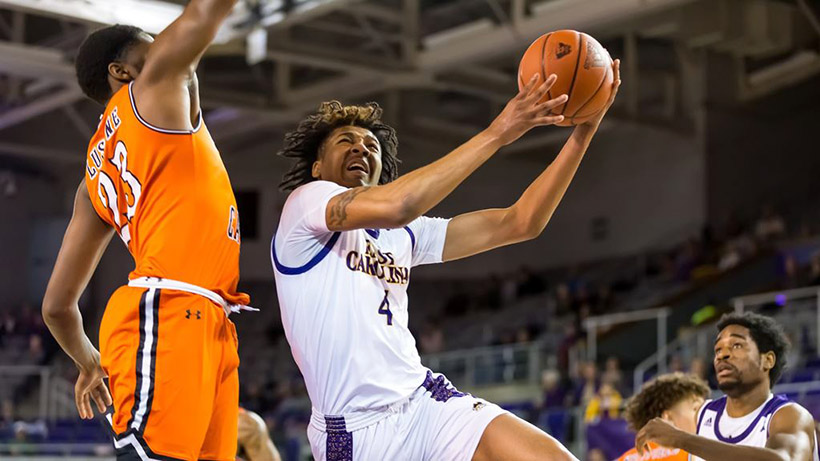 Freshman Brandon Suggs scored a career-best 16 points for ECU (3-7), while junior J.J. Miles and freshman Tristen Newton added 12 and 11 off the bench respectively.

After allowing Campbell (6-3) to score the game's first point East Carolina never trailed again. The Pirates used an 11-0 run over a five-minute stretch to take a 15-4 advantage midway through the first half and stretched their lead to 16, 25-9, with 7 1/2 minutes remaining before intermission.

Cedric Henderson, who led Campbell with 18 points, brought his team within five less than five minutes into the second half. However, the Pirates stymied the turn as Gardner made two free throws, Newton finished a fast break and Miles drilled a 3 as ECU scored seven unanswered to push its lead back to double figures.

East Carolina made 26-of-29 free throw attempts with Gardner going 14-of-16 at the charity stripe and Suggs a perfect 7-of-7. Campbell was just 9-of-13 at the free throw and made only 8-of-28 shots outside the 3-point arc.

Milos Stajcic and Austin McCullough each scored 11 points for Campbell

East Carolina returns to the hardwood Tuesday, Dec. 17, against Maryland-Eastern Shore. Tip-off is scheduled for 7 p.m. inside Williams Arena at Minges Coliseum.

East Carolina Head Coach Joe Dooley     Opening statement     "I thought we got off to a much better start. I thought that our defensive recognition and attention to detail was better, which I thought got us off to a good start with the exception really of a number of turnovers that we hadn't done this year."

On practice during the week     "We had a good week of preparation. We've probably won five of the last six practices. We were good which means we won the day. We talked about trying to stick with that. If we can win four out of five, or five out of six, you're going to get better."

On what the win means     "It's a tale of two seasons. You've seen teams that have started slowly and gotten better all year, and you've seen teams that started out great and sort of fizzled off at the end. Hopefully we can sort of keep building and these young guys will figure some things out."

Sophomore Jayden Gardner     On snapping the losing streak and picking up a victory     "It's exciting If you don't like being a winner you're playing the wrong sport, any sport really. It's nice to get back in the [win] column tonight."

On what he's been working on since last game     "Being more active and communicating with my teammates. We're pushing each other in practice... We've been getting practice really established and we've been doing a really good job at it, and we got some good results tonight."

Freshman Brandon Suggs     On how it feels to break losing streak     "It feels good because we had a good week of practice, so I feel like all the work we did in practice showed today."