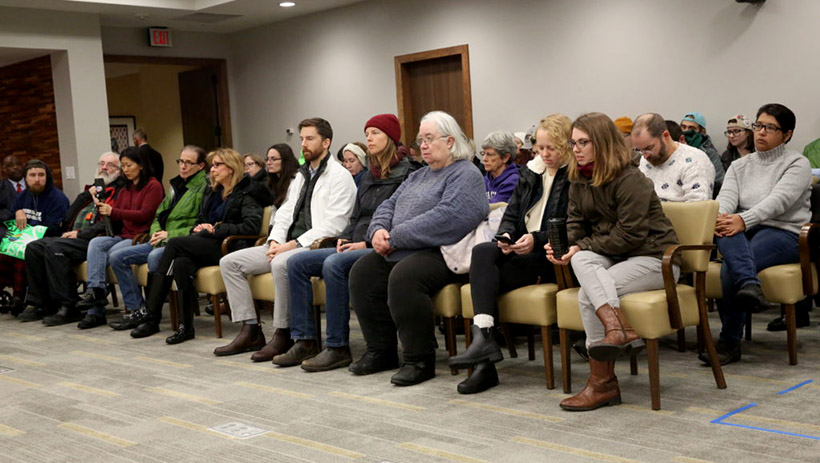 Protesters at the Dec. 13, 2019, UNC Board of Governors meeting in Chapel Hill sat quietly before walking out as the board went into closed session. | Photo: Don Carrington

The protest, which was quiet and orderly compared to those at other UNC events, took place during a meeting of the University of North Carolina System's Board of Governors. Roughly 70 or 80 demonstrators stood outside the UNC Center for School Leadership Development, defying cold, rainy December weather. Only 40 were allowed inside.

Their anger was directed toward a deal struck between UNC and the Sons of the Confederate Veterans. Just before Thanksgiving, the board's governance committee voted to give Silent Sam - which has been sitting in storage since it was torn down in 2018 - to the SCV. UNC included a $2.5 million trust fund to support the statue's preservation and display. The full board didn't approve the decision, but was listening in on the phone meeting.

The public has so far been blocked from learning details about the decision, and that isn't sitting well. No board members were physically present at Friday's meeting. UNC interim President Bill Roper attended in person.

All members attended by phone. 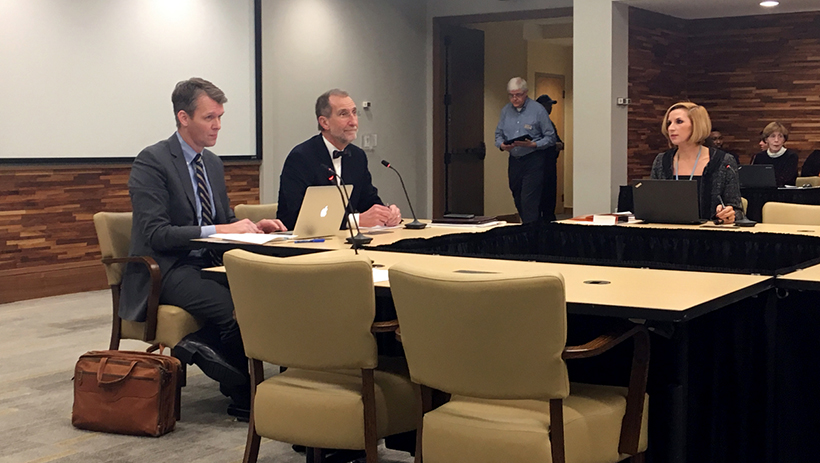 UNC interim President Bill Roper, center, presides over a teleconference meeting of the UNC Board of Governors Friday, Dec. 13, in Chapel Hill. At left is UNC General Counsel Tom Shanahan; at right is board secretary Meredith McCullen. | Photo: Kari Travis

Protesters looked on during the board's open session, which lasted barely more than 20 minutes. The crowd remained mostly docile.

A few shouts erupted when Marty Kotis, an outspoken member of the board, raised questions about accountability for how the SCV will spend its $2.5 million from UNC.

Tom Shanahan, general counsel for UNC, responded that such discussion should happen in closed session. The statement elicited a handful of cries from seated demonstrators. Shortly after, the board announced it would enter closed session. Protesters exited the room, chanting loudly, shouts drifting back to the mostly empty room.

None of the demonstrators remained to see what the board would discuss when it returned to open session.

UNC Chapel Hill interim Chancellor Kevin Guskiewicz, who earlier this week sent a letter of concern over the Silent Sam deal to UNC leaders, was unanimously elected to become the permanent chancellor of the system's flagship university. His starting salary is $620,000.

Roper declined to answer Carolina Journal's questions after the meeting.

CJ will provide more coverage of this developing story.