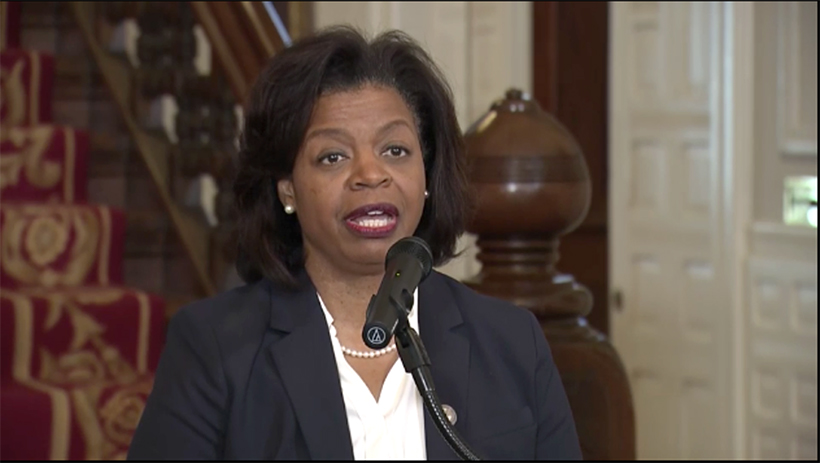 "We need to think about adequately staffing our branch of government," Chief Justice Cheri Beasley said during her address to the council. "We need to think about innovative case management solutions such as drug treatment court, mental health court and family courts. And we also have to work on evidence-based pretrial justice practices that keep our communities safe."

Law professors and judicial branch employees called for improved case management, bail reform, and improved drug treatment courts. The council, a group mainly of judges and attorneys which reviews funding of the judicial branch, wants to develop legislative proposals by September, before the General Assembly's next budget session in 2021.

It was the first time the council had convened in five years, at Beasley's direction. During the interim, Chief Justice Mark Martin led the https://nccalj.org/

to address many similar reforms. The commission, composed of more than 70 judges, attorneys, and lay people, spent 15 months on a comprehensive review of the judicial branch.

One outcome from the commission's recommendations: Raise the Age legislation, increasing the age from 16 to 18 most juveniles charged with low-level offenses would be handled by the adult correction system. The law became effective Dec. 2.

If someone wanted to review most North Carolina trial-level lawsuits - say, the "Silent Sam" case involving a controversial settlement over a Confederate monument - chances are the legal documents aren't online. Unless the presiding judge or one of the attorneys wants the filings published, the only way to access them would be to travel to the host county's courthouse and read a copy.

"We're at least 30 years behind other court systems," said Campbell Law School Dean Rich Leonard, who chaired one of the task forces responsible for rolling out an electronic case management system for the federal courts. The federal courts were dealing with a similar, decades-old system.

"It's hard to get access, and this deprives people of basic justice."

Without a contemporary case-management system, it's difficult both for lawyers inside the system and people outside the system to access information, Leonard said.

"If I were in the legislature, new judicial system technology would be my highest funding priority," Leonard said. "I think it would change the perception of justice in this state if all the information about cases were available remotely in searchable databases."

When Leonard helped design an updated electronic system for the federal courts, it largely paid for itself, he said. The system charges users a fee, causing millions to pour back into the courts.

Rep. Sarah Stevens, R-Surry, chair of the House Judiciary Committee, agreed the judicial system could improve its technology. But during a discussion on technology within the past two terms, the Administrative Office of the Courts wanted lawmakers to focus on Raise the Age funding.

In the end, squeaky wheels get the grease, she said. Oftentimes, education, which reaches near 58% of the state's budget, gets top priority. Then come health and human services, prisons, parks, and cultural affairs, Stevens said.

Several council presenters emphasized budget concerns. North Carolina's judicial system comprises 2.3% of the state's General Fund budget, or $558 million. More than 90% of that goes to personnel salaries and benefits. The total doesn't include the prison system, which falls under the executive branch.

Compared with other states, North Carolina ranks 48th on judicial spending per capita, based on a census data analysis by Joe Coletti, senior fellow at the John Locke Foundation. But it ranks 23rd when you compare the state expenditures alone, Coletti said. That's largely because North Carolina has a unified court system, with 85% of its funding coming from the state. Other states rely more on local funding than does North Carolina.

Justice Robin Hudson, who led the Judicial Council meeting, said the session gave the council a boost as it launches into a reform of the state court system.

"Improving the branch and ensuring public confidence in it is important to our success," she said.