College is about the space between classes as much as it is the classes themselves. beaufort county community college, BCCC, berenice reyes, spanish interpreter, december 11, 2019
Home
Categories
Login

WASHINGTON, N.C.     College is about the space between classes as much as it is the classes themselves. Students can meet lifelong friends, explore their interests and passions, and learn softs skills that they will carry with them for the rest of their lives. While community college can be a quick avenue to employment for some, Berenice Reyes found that how she uses that space between classes at Beaufort County Community College has helped her to enjoy her classes more than those who head home after class. The first-generation college student has seen her personality and mental health shift through her participation in six student organizations and the work-study program. 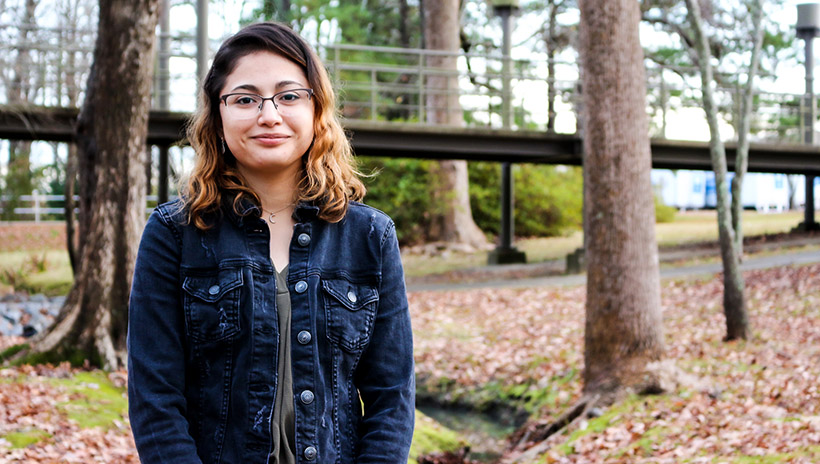 Berenice Reyes will graduate in May with an Associate in Arts and a Community Spanish Interpreter Certificate on her way to a graduate degree in environmental health.

Reyes came to BCCC like many other incoming students: a little sheepish and without an extensive background in student clubs. Having participated in National Honor Society at Washington High School, she decided to join Gamma Beta Phi at BCCC. Through this service-oriented honor society, she ramped up her involvement.

"I wanted to do more," she says. "I was too quiet. Too timid. I wasn't very self-confident. So then when I got here, I was like, 'heck, I'm going to join everything." She made it her goal to join more organizations for her second year. When Gamma Beta Phi president Darian Buzzell would offer any opportunity to her, she would take it. She had one of the highest levels of service hours in the club.

"It felt good that other people were recognizing the good in me," she says. After years of avoiding the spotlight, she suddenly felt seen. Using the space between classes meant that the space between her and others grew smaller, as did the space inside of her where self-doubt had manifested.

"It was a domino effect. Whatever opportunity I came across, I took it," she says. "I started discovering skills and qualities about myself that I didn't know I had. I came out of my shell."

She expanded her involvement to the Student Government Association, the LGBT+ Club and excitedly jumped aboard as an officer in the new BCCC Environmental Alliance. She also serves as an ambassador for the college, a position for which she had to be nominated. Her twin sister Veronica will join her as she travels to Belize with Study Abroad. Between classes, she is also a work-study student at the financial aid office at BCCC.

"Before clubs I didn't think I was good at talking to people at all, like zero. Now I feel like I'm better at socializing and helping people out. I want something I will learn from and take into a career path."

The Environmental Alliance felt especially important to Reyes as she plans to earn a bachelor's degree in environmental health, hoping to continue her education through a Ph.D. She will graduate this May with an Associate in Arts and a Community Spanish Interpreter Certificate. She is waiting to hear back from the Universities of North Carolina in Chapel Hill, Wilmington and Asheville, along with East Carolina University.

"If I can go on to get a Ph.D. then, yeah, be Dr. Reyes," she says confidently. She wants to start out locally at a state or county regulatory agency, but would be happy to work on the federal level. "Having the Spanish Interpreter Certificate will give me an advantage because I can reach into the Hispanic or immigrant community."

Of her love for the environment, she says, "I've always interest in playing outside. I realized when I was outside I felt better. If we can have more outdoor spaces and playgrounds for kids, we'd have a better society."

She says that she was a reckless child, unafraid of dangerous situations or the outdoors, but in high school her obsessive-compulsive disorder got in the way. Besides diving into student organizations, another big commitment she made when she got to the college was to accept help for her mental health. This has meant that she is able to get back outside, which in turn helps her relieve stress.

To see classes and the spaces between them as being separate is a mistake. Berenice Reyes has turned those spaces into connections: between what she learns and how she acts; between herself, other students and the community at large; between herself and the natural world, and between who she is and who she aspires to be. In this way, college becomes one large integrated experience.

"College is more fun when you're part of clubs."