The deal turns over the Confederate monument, which stood on the UNC-Chapel Hill campus for more than a century, to the Confederate group, along with a promised $2.5 million trust fund for the statue’s upkeep and eventual display. carolina journal, UNC board, scandal, silent sam, december 10, 2019
Home
Categories
Login

UNC Board Ready to Move on … to Next Scandal 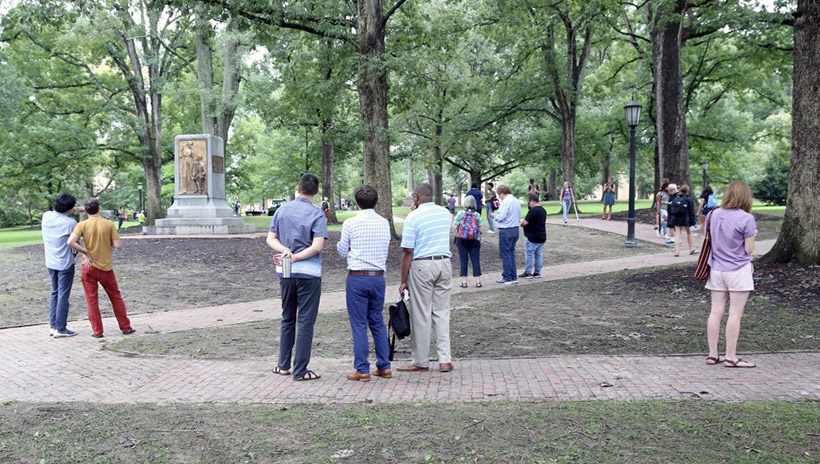 Onlookers view the base of "Silent Sam" Aug. 20, 2018, the day after protesters removed the Confederate monument from its post at UNC-Chapel Hill. | Photo: Don Carrington

We sent the December print edition of Carolina Journal to the printer Tuesday, Nov. 26. On the cover, we teased a news story inside the paper about the UNC Board of Governors wanting to "move on, despite behind-the-scenes drama."

As they say sarcastically on Twitter, that didn't age well.

The next day, the board offered its own version of the "WKRP in Cincinnati" turkey drop to North Carolina in the form of a behind-the-scenes agreement with the Sons of Confederate Veterans over Silent Sam. The deal turns over the Confederate monument, which stood on the UNC-Chapel Hill campus for more than a century, to the Confederate group, along with a promised $2.5 million trust fund for the statue's upkeep and eventual display.

As reporting in CJ and elsewhere revealed, the arrangements were conducted in secret, approved without a full vote of the BOG, and the paperwork filed and stamped in a matter of minutes. With no public discussion. Indeed, it appears that a task force of BOG members assigned to figure out how to deal with Silent Sam wasn't involved in the negotiations ... or at least some weren't.

Plenty of this is murky by design. UNC System officials have said they're ready to put the matter to bed. Several people close to the situation, including former BOG Chairman Harry Smith, have praised the deal. Smith's successor, Randy Ramsey, refuses to discuss it. UNC-Chapel Hill Interim Chancellor Kevin Guskiewicz says state Attorney General Josh Stein and Superior Court Judge Allen Baddour, who signed the papers, were OK with the outcome.

Time to move on? Of course not.

The monument to UNC students killed in the Civil War from the United Daughters of the Confederacy was toppled from its pedestal in August 2018. Then it was taken to an undisclosed location by university officials. It hasn't emerged publicly since.

Those actions violate a 2015 state law barring the removal of historic memorials and artifacts from their locations without the approval of the N.C. Historical Commission. Items temporarily can be taken away for repairs or renovations, but they have to be in place within 90 days.

Silent Sam has been absent for nearly 400 days.

Moreover, former UNC-Chapel Hill Chancellor Carol Folt had Sam's pedestal removed as she was being forced out of her post .... 11 months ago.

To date, no one at the Chapel Hill campus or the university system has been held accountable for breaking the law. Some of the protesters who vandalized the statue and some opposing protesters who got out of hand have had their day in court. But the actual custodians of the monument have skated.

When Republicans took control of the General Assembly in 2011, they also took charge of selecting members of the BOG. At the time, conservatives claimed they wanted to bring responsible governance to UNC and its member campuses; to appoint governors who were accountable to the taxpayers who fund the multibillion-dollar system; and to hold responsible board members who merely rubber-stamped decisions made by (liberal) faculty and staff.

UNC's handling of the Silent Sam debacle fails those tests.

Ramsey signed the lawsuit settlement Nov. 22, five days before the lawsuit was filed. The Sons of Confederate Veterans had no right to the monument until the next day, when the United Daughters of the Confederacy transferred those rights to the SCV. UNC Interim President Bill Roper signed off Nov. 26, the day before paperwork went to Baddour.

The SCV filed its complaint against the university at 11:11 a.m. Nov. 27. One minute later, UNC filed its response, denying any wrongdoing. At 11:17, Baddour issued the settlement deal, including $2.5 million in "non-state funds" to set up a trust fund for the monument's and maintenance and to pay for a place to house it.

The BOG's governance committee backed the deal in a closed session. The full board never voted.

In other words, a Board of Governors picked by conservative Republicans acted no differently than their liberal predecessors reportedly did.

If not worse. An email from Kevin Stone, commander of the N.C. Division of the SCV to his members, leaked. The email claimed the General Assembly was ready to amend the 2015 monument, carve out an exception for Silent Sam, and give SCV between $300,000 and $500,000 in taxpayer money for the statue.

House leaders were ready to approve the deal, Stone said, but the Senate balked.

House Speaker Tim Moore, R-Cleveland, hasn't responded to a request for comment. Just like the folks at UNC have clammed up.

There's no shortage of suggestions about legal ways to settle the fate of Silent Sam. They need to be done in public view, calmly, passionately, and with respect.

The Board of Governors' next meeting is set, aptly enough, for Friday the 13th. How much longer the nightmare lasts is anyone's guess.