GOP Appellate Judge Candidates Choose to Run as a Team 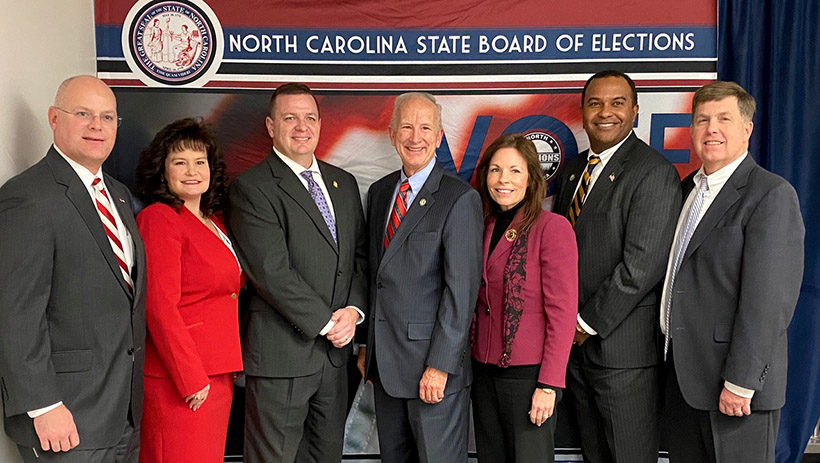 If they played football, they'd wear long, black jerseys, and their end zone would be a judicial bench.

"We're all on the same team," said N.C. Court of Appeals Judge Phil Berger Jr. in a June 9 pinned tweet. He's running for a state Supreme Court seat next year. "We all have on the same jersey. We have the same judicial philosophy. And we're all conservative!"

A group of eight Republicans are running for appellate court seats next year. But instead of pushing individual campaigns, they're all running together under a conservative brand.

The strategy was the brainchild of "quarterback" Supreme Court Justice Paul Newby, who's running for chief justice and recruited several of the other candidates, Berger said.

The collaboration isn't as much about pooling funds as it is about messaging - working events together and possibly sharing advertisements later in the campaign. The group has already circulated 300,000 campaign cards.

"I've been involved in politics for a long time," Berger said. "I've never seen this level of focus and organization by all the Republican judicial candidates on this scale."

Berger said he thinks public interest in judicial races has grown. The Supreme Court holds a 6-1 Democratic majority. Democrats have flipped three of those seats since 2016.

The plan could backfire if one candidate hits a bump along the campaign trail, said David McLennan, professor of political science at Meredith College.

But innovation is smart, he said. With campaigns for governor, president, and U.S. Senate, a fresh new strategy in the lower-profile judicial races might help cut through the clutter.

It's the first time McLennan has seen North Carolina judicial candidates run a coordinated campaign. He's also not aware of any other states where this has happened. Governors and lieutenant governors sometimes run together in N.C., but not judges.

Meanwhile, The Insider noted that Democrats apparently also have decided to file only one candidate for each judicial seat, avoiding primaries. It's unclear if Democrats will coordinate their campaigns.

One group came close to a coordinated effort several years ago. The conservative political action committee "Justice for All N.C." ran several ads against Democrats in 2012 and 2014. One 2012 ad linked then Court of Appeals Judge Sam Ervin IV with campaign contributions to former Democratic Gov. Mike Easley, who accepted a felony plea for campaign violations. Ervin lost the 2012 election to current Associate Justice Paul Newby, but in 2014 won a seat on the Supreme Court.

A 2014 ad from the conservative PAC accused candidate Justice Robin Hudson of "siding with child molesters" in one of her judicial rulings.

At the time, judicial races were nominally nonpartisan. Voters couldn't tell whether they were voting for a Democrat or Republican by simply looking at the candidate's name on the ballot. In 2016, appellate elections became partisan.

Republicans appeared first on the state's 2016 General Election ballot, which reflects the party of the governor. As the thought goes, people voting Republican down the ballot simply became accustomed to filling in the top line and, as a result, voted for Morgan.

Gerry Cohen, a Raleigh attorney and a former special counsel to the North Carolina General Assembly, at the time called it voting "the same line."

Republicans in particular have the brand advantage when it comes to law and order, Taylor added. Surveys show the public thinks Republicans generally make better judges. Democrats poll better when it comes to other issues like education and health care.

"The public realizes that their rights potentially will be taken away by activist judges," Berger said. "And there are eight of us on the front lines protecting people's constitutional rights."