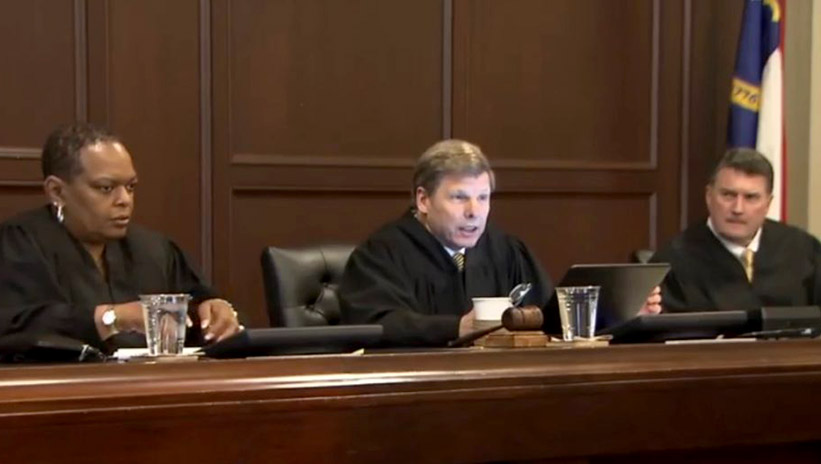 The court ran out of time to sort out all the facts, Superior Court Judge Paul Ridgeway said on behalf of the panel. Ridgeway noted the plaintiffs filed their lawsuit in September.

"Had [the litigation] been commenced earlier - say in June, immediately after the Supreme Court ruling in Rucho v. Common Cause - the adversarial process could more fully have run its course," he said. "There is simply not sufficient time to fully develop the factual record without significantly delaying the primary elections."

The same three-judge panel - Democrats Ridgeway and Alma Hinton, and Republican Joseph Crosswhite - approved redraws of the state legislative maps in October as a result of Common Cause v. Lewis. Bob Phillips, executive director of Common Cause N.C. - the plaintiff in that case - said the attorneys were heavily focused on the state case after the Supreme Court ruled over the summer.

"Not to say we have so many balls up in the air, but with Common Cause, we were less than a month away from a challenge before this same court," he told Carolina Journal. "That started around mid-July, and all our attention was on that case."

Waiting for another map redraw would likely delay the March primaries, said attorney Paul Cox, who represented the State Board of Elections in the case. The board needed a new map by Dec. 15 or congressional primaries would have to wait until June or August.

Primary delays are known to result in drastic decreases in voter turnout, noted attorney John Branch, who represented U.S. Reps. Virginia Foxx, R-5th, and Ted Budd, R-13th. Those incumbent members of Congress had filed to intervene in the case.

The maps redrawn by the legislature in November would result in eight Republican-leaning and five Democrat-leaning districts, various analysts say - compared with a current 10-3 split favoring Republicans.

But plaintiffs say the map redraws are still an "extreme partisan gerrymander," compared with thousands of computer simulations by University of Michigan political scientist and redistricting expert Jowei Chen. Seven of the districts are more extreme in partisanship than 98.7% of Chen's maps, and four are more extreme than all of them, attorney Stanton Jones said.

"They're playing a game of whack-a-mole, where they just try to run out the clock," he said. "Defendants said it's useless to use any alternative to the 2019 plan."

But the most common result was eight Republicans and five Democrats in Chen's simulated maps, said defendant attorney Phil Strach. About 45% of voters would switch districts in the next election, amounting to hundreds of thousands of people, he said.

Plaintiffs said the population switch was closer to 35%, leaving the judges with yet another disagreement over the facts of the case.

Strach said only 28% of residents in the 2nd and 4th districts would be represented by their congressional incumbents.

"I think this clearly indicates a difference from the 2016 plan," Strach said.

"This map is and will be impervious to how people will vote in 2020," Jones said. "And that continues to violate constitutional rights."

The process may not have been "perfect," and the results are possibly flawed, said Ridgeway, but lawmakers will draw new maps after the census next year anyway.

"It is the court's fervent hope that the past 90 days becomes the basis for the state's redistricting process going forward," he said.