Pirates Set for Trip to Liberty 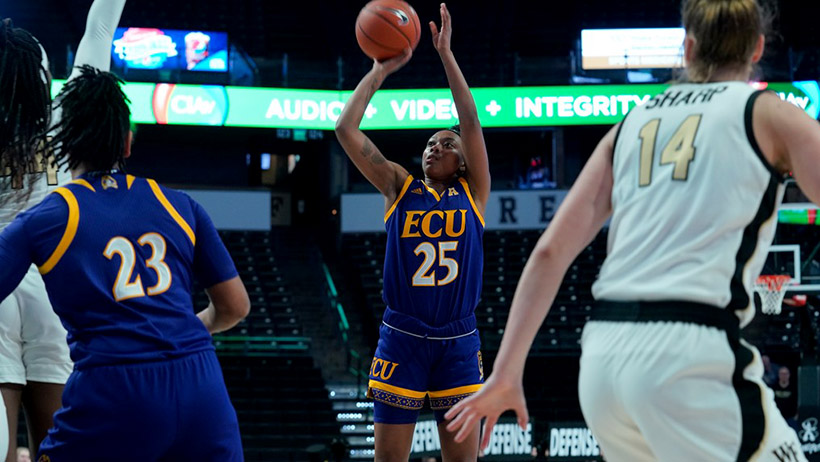 GREENVILLE, N.C.     Playing its ninth game in less than 30 days, the ECU women's basketball team will take on Liberty on Tuesday night.

ECU (3-5) had a two-game winning streak snapped when the Pirates fell 76-53 at Wake Forest. ECU did not have an answer for the Demon Deacons on the boards, getting outrebounded 49-20. Lashonda Monk was the bright spot in the loss, scoring 21 points for the second straight game and leads the team with a scoring average of 16.3 ppg. Monk has steadily improved her outside shooting and has now hit at least one three-pointer in a career-best seven straight games and is shooting 33.3% from beyond the arc. Monk also leads the team in steals, with 29 and she now has 220 in her career, placing her fifth all-time at ECU. Dominique Claytor is right behind Monk in thefts, racking up 28 of her own. Monk and Claytor are sixth and seventh, respectively, in the country in steals and the Pirates rank second as a team. ECU is also in the top-five in steals per game (14.6, fourth), turnover margin (+11.63, second) and turnovers forced (26.13, third). In the absence of Raven Johnson, who has missed the past four games due to injury, Claytor has been the top rebounder for ECU and she is now averaging 5.6 rpg, including a career-high 11 in a win at Longwood.

Liberty (2-6) split its two games at the Miami Thanksgiving Classic in Coral Gables, Fla., beating Miami (Ohio) 65-53 before losing to No. 5/7 Oregon State 68-55. Prior to beating Miami (Ohio), the Flames had lost five straight games and are 0-3 at home this season. Keyen Green leads Liberty in both scoring (11.1 ppg), rebounding (7.5 rpg) and blocks (nine). Ashtyn Baker is also scoring in double-figures (10.5 ppg). Ria Gulley leads the Flames with 32 assists while Bridgette Rennstatt has 13 steals. The Flames have been strong on the glass, grabbing 319 boards, which is 32nd in the nation. ECU will have a chance to get to the free throw line, as Liberty averages 22.4 fouls per game, which is 334th in the NCAA.

It will be just the second meeting between the two schools, although the first time the two played was an instant classic. Liberty came to Minges Coliseum last December and took on ECU in front of a then-program record 6,276 fans. The Flames took a seven point lead into the halftime break and still led by five at the end of the third quarter. ECU finally battled back to take a 63-60 lead, but Liberty tied the game with 1:04 remaining. Both teams had a chance to take the lead in the final minute, but the game came down to the final seconds. After an offensive rebound by Justice Gee, the Pirates called a timeout to set up a play with four seconds remaining. On the inbounds, Monk hit Gee at the top of the key and her long three-point attempt hit nothing but net, sending ECU home victorious. Monk led ECU with 16 points, six assists and five steals in the win.

Tipoff is scheduled for 7 p.m., on Tuesday night at the Vines Center. Fans can stream the game on ESPN Plus or follow the live stats HERE.