The life of a parasite can be difficult. At best they’re exploitative; at worst they turn their host into a zombie. east carolina university, ECU, parasitic bird, species, nature vs. nurture, learning systems, december 3, 2019
Home
Categories
Login 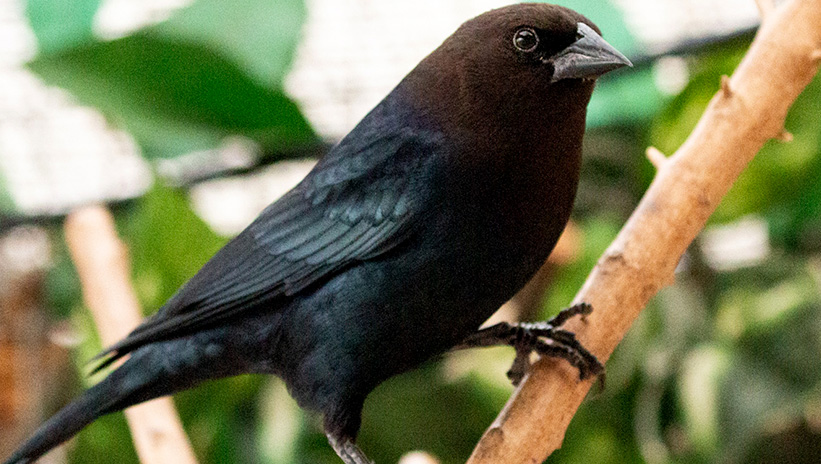 The life of a parasite can be difficult. At best they're exploitative; at worst they turn their host into a zombie.

Now try facing all those challenges without help from mom and dad.

Despite these disadvantages, one parasitic bird species is helping East Carolina University researchers build a link between how innate behaviors guide the learning process. You'll just need the "password" to unlock the species' secrets.

The brown-headed cowbird (Molothrus ater), found throughout North America, lays its eggs in the nests of other birds in hopes that its offspring will be raised by its "foster" parents. The juvenile cowbird often hatches before the host's offspring and develops faster than its competition, enabling it to make a comfy home in a stranger's bedroom.

In a paper published in December's issue of Current Biology, Chris Balakrishnan, an associate professor in ECU's Thomas Harriot College of Arts and Sciences, is a contributing author of a study exploring how the cowbird learns to identify its own kind, despite being raised by a different species. 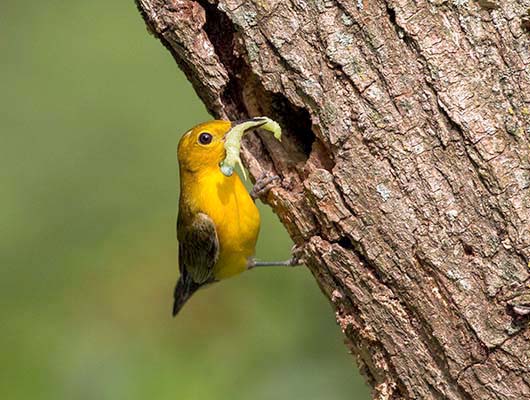 The prothonotary warbler can serve as a host for the brown-headed cowbird’s offspring. Cowbirds are a parasitic species that lay their eggs in other bird’s nests in the hopes that their young will be raised by the “foster” parents.
The research hypothesized that the species' chatter call significantly affects two key behaviors in cowbirds: enhancing the song learning of males and song recognition in females.

Study results showed that the password was a key mechanism in cowbird learning, bridging the gap between innate behavior - the bird's chatter call - and learned behavior - song production and eventually, the choice of mates.

"Some of the questions I'm often asked are, 'Why don't these birds mate with the species that raised them? Why are they not confused about what they are?'" Balakrishnan said. "The bird's chatter call helps us answer those questions. The call tells other cowbirds, 'What I'm saying is important. Listen to this. Learn this.' This helps the bird reliably identify its own species and helps males learn which song to sing to attract a mate."

Balakrishnan said he doesn't believe this password mechanism is unique to cowbirds ­­- although there has been little recorded research on it in other species ­- and that the study shows the complex interplay between innate and learned behaviors that may be common throughout species, including humans.

"Humans learn how to speak by essentially copying their parents," Balakrishnan said. "It's known as learned vocal communication or vocal learning. This type of behavior is rare in nature. Outside of humans, songbirds ­- like the cowbird - are one of the few other animals that practice learned communication.

"In some ways, bird vocalization learning mirrors how humans learn to speak better than other mammalian models do," he said. "We may be able to use this process to better understand how vocal learning works in humans and learn more about how we learn to speak."

"We used a canary song instead of a traditional cowbird song because it gave us a more distinct sound to measure," Balakrishnan said. "If we played a cowbird song, they would still sound like a cowbird, regardless of whether the password influenced their learning or not. While the cowbirds that heard the chatter call didn't produce the cleanest canary song sound, it still showed a significant degree of learning over the control group."

The research team also studied the brain function of male and female cowbirds who were introduced to the chatter call, examining particular gene activation associated with learning and brain development. The team found that certain genes were activated and changed during the experiment while playing the chatter call, providing more evidence that the password unlocks an avenue for learning in cowbirds.

"We've worked hard to get to this point," Balakrishnan said. "We're going to keep studying this mechanism and see if we can generalize these findings across species."

Funding for the project was split between ECU and the University of Illinois at Urbana-Champaign.