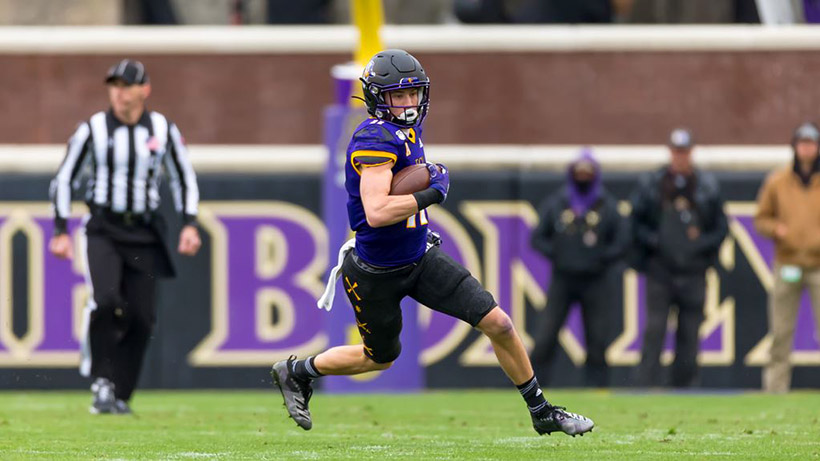 A chilly, drizzly afternoon and sparse crowd (27,978 tickets sold but far fewer in the stands) on a post-Thanksgiving Saturday afternoon didn't create a festive mood, and an explosive Tulsa team far better than the 3-8 record it brought in quickly made sure it did not get that way.

The Golden Hurricane took control early with big plays both on the ground and through the air on the way to a 49-24 victory, leaving the Pirates 4-8 in their first year under head coach Mike Houston.

Pena acknowledged the final game stings but prefers to focus on the steps made this year in leaving three consecutive 3-9 seasons behind.

"Obviously this is not the way we wanted to end the season, but I told the guys last night when we were giving senior speeches that when I look at all them, I don't see a losing program," said Pena, who played in 17 career games with 13 starts. "The record doesn't reflect who we are, and it's not going to in the future."

The Pirates posted wins over Gardner-Webb, William & Mary, Old Dominion and UConn to finish 4-8 and 1-7 in the American Athletic Conference but showed their greatest strides in a strong second half at two-time defending conference champion UCF and in narrow losses to nationally-ranked Cincinnati and SMU.

Houston said those are tangible signs of program's progress just a few days ahead of the one-year anniversary of being hired to replace Scottie Montgomery.

"Is it in better shape today than it was a year ago? Yes. Anybody that doesn't see that or doesn't say obviously is not paying a whole lot of attention," Houston said. "At the same time are we where we want to be? Not even close. We have very high expectations for East Carolina football. This is a great place. I think that we can win here. There's no doubt. And we will get there."

Senior defensive tackle Alex Turner fully believes Houston has ECU on the right track to compete with the AAC's elite.

"I think Coach Houston has done a good job of coming in and honestly cleaning a lot of stuff up," Turner said. "Quite honestly, when I came in with Coach Mo's first recruiting class there were a lot of issues with the program already, and I think over the years it's kind of built up. The program's going to turn around. I'm just glad that I was able to be here and have some part in that."

For Tulsa (4-8, 2-6 AAC) and head coach Philip Montgomery, Saturday's convincing win served as some satisfaction in a season in which it missed a 29-yard field goal in 42-41 loss to Memphis and fell in triple overtime to SMU after holding a three-touchdown lead. The Golden Hurricane dominated in virtually every facet in amassing 669 total yards - the fourth-most ever gained by an ECU opponent - with an uncanny balance of passing (338 yards) and rushing (331 yards).

Smith, a transfer from Baylor, set a career high with five touchdown passes, targeting five different receivers and finished 21 of 30 for 331 yards. Brooks established a career best with 202 rushing yards and surpassed 1,000 yards for the year, moving up to fifth place in school history with 2,700 career yards.

All told, the Golden Hurricane ripped off nine plays of at least 28 yards, including their longest run (66 yards) and longest pass (64 yards) of the year.

The Pirates, meanwhile, never found an offensive rhythm, managing a lone field goal while punting six times in a first half in which they were 0-of-7 on third-down conversions. Sophomore quarterback Holton Ahlers finished 27-of-48 for 308 yards and three touchdowns - giving him 1,715 yards passing and 14 touchdowns in the final four games.

Tyler Snead, who had 35 receptions in his last two games, was limited to seven catches for 55 yards by Tulsa's defense. Blake Proehl had a team-high eight catches, including a pair of touchdowns and freshman C.J. Johnson turned in his fourth 100-yard-plus game with six catches for 141 yards.

But ECU would scrape out just 75 yards in the ground, a major factor in trying to sustain drives.

"They did a good job of taking away the crossing routes because they did drop so many at times," Houston said. "The disappointing thing is we weren't more effective running the football than they were today. If a team is going to play a lot of coverage then obviously you've got to be able to run the football better."

Brooks signaled things to come early when he broke off a 64-yard run but was called for a facemask penalty. The Golden Hurricane could not capitalize and Jalen Price stuffed a fourth-down run when slipped through and dropped T.K. Wilkerson for a 4-yard loss.

After gaining just 26 yards and one first down on its first three possessions, the Pirates got on the board first when Jake Verity booted a season-long 51-yard field goal for a 3-0 lead.

That edge lasted a mere 36 seconds. Tulsa answered in a flash with Smith connecting with Sam Crawford Jr., who hauled in a pass along the right sideline and streaked 66 yards to give the Golden Hurricane the lead.

Tulsa again struck quickly on its next possession on a 29-yard pass from Smith to Keenen Johnson to extend the lead to 14-3, then added a touchdown on their third-straight possession on Smith's 4-yard pass for a 21-3 advantage.

ECU got a spark of life to start the third quarter, but it faded as quickly. Davondre Robinson's interception of a third-down pass gave the Pirates possession at midfield. Houston then called for a double pass, but freshman Jsi Hatfield tried to tuck the ball after finding no receiver open and was stripped by Jaxon Player. Reggie Robinson's recovery and return gave Tulsa the ball at the ECU 21 and Wilkerson trotted in from the 10 four plays later for a 28-3 lead.

"We had some momentum right there and had a 'take a shot' play called," Houston said. "A freshman, he was the integral player right there, and he made a mistake with the ball and put it on the ground."

The Pirates never seriously threatened from there despite three Ahlers touchdown passes as Tulsa put up three scores of their own.

Pena believes those days are numbered, given the difference in a year ago when the Pirates lost their finale to NC State 58-3.

"After the last game last year I could describe it in one word, and it was defeated," Pena said. "I feel like the team was defeated and we didn't know what was going to happen next. The locker room has changed too. I know this team is going to go head-first into the offseason and they're going to do what needs to be done. Mark my words, you're going to see a different team."