After a dominant first half, the ECU women's basketball team had to make pressure free throws down the stretch to hold off a frantic Longwood comeback, as the Pirates took a 64-61 win on Tuesday evening in Willett Hall. east carolina university, ECU, women's basketball, longwood, final score, november 27, 2019
Home
Categories
Login

Pirates Hold on to Top Longwood 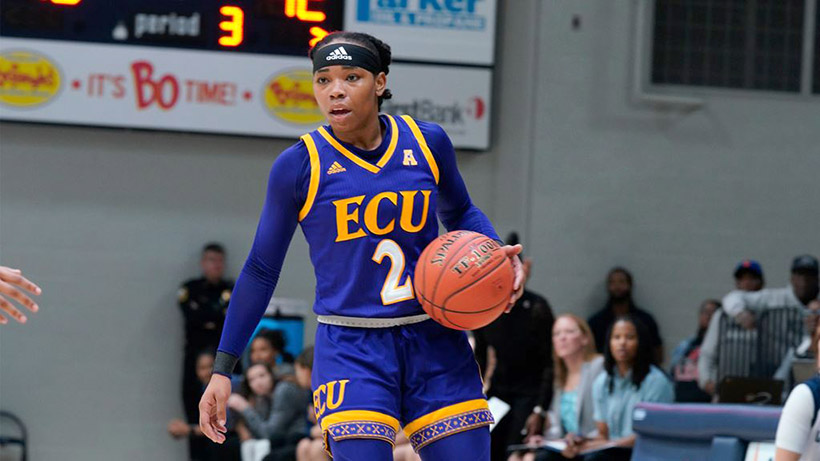 FARMVILLE, VA.     After a dominant first half, the ECU women's basketball team had to make pressure free throws down the stretch to hold off a frantic Longwood comeback, as the Pirates took a 64-61 win on Tuesday evening in Willett Hall.

ECU improves to 3-4 on the season and gets its first road victory of the year. Longwood drops to 2-4, losing at home for the first time in three tries.

Lashonda Monk led ECU with 21 points, including making three free throws in the final 15 seconds that represented the final margin. Ryann Evans had her best game as a collegian, scoring 16 points on 8-of-11 (.727) shooting and adding three rebounds and two steals. Dominique Claytor stuffed the stat sheet, leading ECU with 11 rebounds, five steals and three assists. The Pirates had 21 offensive rebounds and forced 25 Longwood turnovers.

Longwood was led in scoring by Kyla McMakin who finished with 26 points with three triples and five free throws. Dayna Rouse and Anne-Hamilton Leroy both had 12 points, with Rouse grabbing 13 rebounds. Rouse had two blocks, as did Akila Smith and Tayonna Robertson with Longwood blocking eight shots in all.

The Pirates could not have asked for a better start. ECU came out ready to score, shooting 9-of-20 (.450) from the floor in the first quarter, making a pair of threes and going 5-of-5 from the free throw line. On the other end, Longwood had success shooting the ball, making 6-of-8 (.750) shots in the opening ten minutes, but ECU did force the Lancers into 10 turnovers to help the Pirates take a 25-15 lead after a quarter. Monk had seven points in the frame while Claytor had six.

The second quarter was evenly matched, with Necole Hope scoring five points for the Pirates to help ECU take a 39-28 lead into the break.

The comfortable ECU cushion was erased almost as soon as the second half started. McMakin made a layup and a pair of threes for a personal 8-0 run to start the half, cutting the Pirate lead to just three. The two teams went back and forth in the third, with the ECU lead never reaching more than five while Longwood tied the game on a pair of occasions. The second time came when Leroy completed a three-point play near the end of the quarter and the two teams headed into the fourth deadlocked at 49.

A quick five-point run from Monk opened the fourth and gave ECU a lead to cling to. The Pirates hung on to that lead mainly thanks to Evans, who had six of the next seven ECU points. However, Longwood tied the game once again on a McMakin jumper with 1:28 remaining.

The two teams traded stops until there was less than 15 seconds remaining. On a Longwood inbounds pass, the Pirates were able to get a trap in the corner forcing the Lancers to call timeout. However, they had used their final timeout the possession before, resulting in a technical foul and a pair of ECU free throws. Monk stepped up to the line and sank both attempts, giving the Pirates the lead.

On the ensuing ECU inbounds, Monk was again fouled and she made one of two tries. The Lancers rebounded the miss and pushed for the game-tying three, but could not get a shot off before time expired.

ECU will be back in action on Saturday when the Pirates take on ACC foe Wake Forest in Winston-Salem. Tipoff is scheduled for 1 p.m.