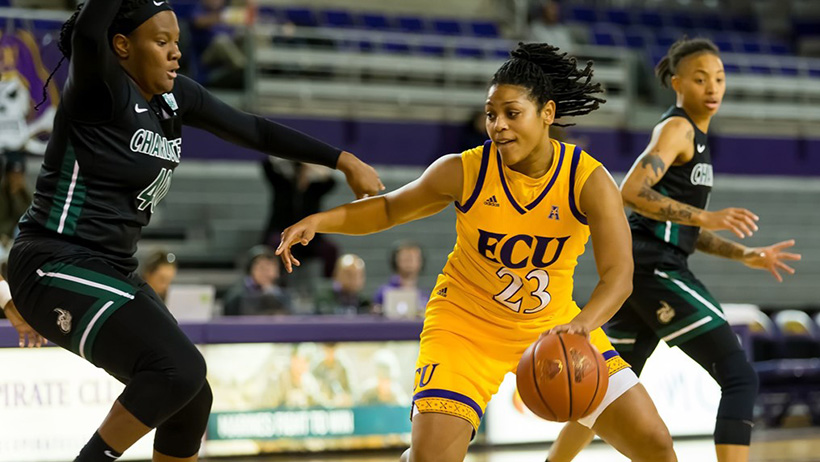 GREENVILLE, N.C.     Tuesday night will mark the start of three straight road games for the ECU women's basketball team as the Pirates head to Farmville, Va., to take on Longwood.

ECU (2-3) used a staunch defense to hold Maryland Eastern Shore to only 42 in a 57-42 victory that snapped a three-game losing streak. The Pirate defense is fifth in the country in steals per game, averaging 15.0 and fifth in turnovers forced, with 26.67 per game. Lashonda Monk (24 steals) and Dominique Claytor (22) are both in the top-five in the NCAA in steals, ranking third and fourth respectively. Monk also leads the team in scoring, averaging 14.7 points while Taniyah Thompson is right behind her with an average of 14.2 points. Raven Johnson is also in double figures in scoring, averaging 11.0 points and leading the team with 8.3 rebounds. However, Johnson has missed the past two games due to injury and Claytor has picked up the slack on the boards. Claytor has grabbed 17 rebounds over the past two games while also scoring 14 points, handing out six assists and grabbing nine steals.

Longwood (2-3) has not played in nearly a week, with the Lancers last game being a 79-76 setback at Wofford last Wednesday. So far this season, the Lancers have been much better at home, going 2-0 with wins against UNCW and Brown in the friendly confines of Willett Hall, while going 0-3 on the road. Dayna Rouse, a Preseason First-Team All-Big South selection, leads the Lancers in scoring (15.4 ppg) and is second in rebounding (5.8 rpg). She has been effective at getting to the free throw line and is shooing 29-of-34 (.853) from the charity stripe. Kyla McMakin leads the team in rebounding, grabbing 6.2 boards per game and is scoring 12.6 points per night. Tra'dayja Smith has been the primary playmaker for the Lancers and her average of 6.0 assist per game is 24th in the NCAA. She is also averaging 10.6 points while Anne-Hamilton Leroy is scoring 10.2 points per game. The Lancers have struggled defensively, allowing 75.4 points each game and are being outrebounded by 10.8 boards, both of which rank 300th or worse in the country.

ECU holds an all-time record of 8-2 against the Lancers and has won three straight against Longwood. However, the two teams have only met twice since 1979. Last year, the two squads played each other at the Myrtle Beach Classic with ECU taking a 61-53 win. Monk led the Pirates with 13 points, five assists and five steals in the victory. The last time Longwood and ECU played each other in Farmville was in 2005, with ECU taking a 73-59 win. In three meetings at Longwood, the Pirates are 2-1 against the Lancers.

Tipoff is scheduled for 7 p.m., on Tuesday evening. Fans can stream the game on ESPN Plus or follow the live stats HERE.