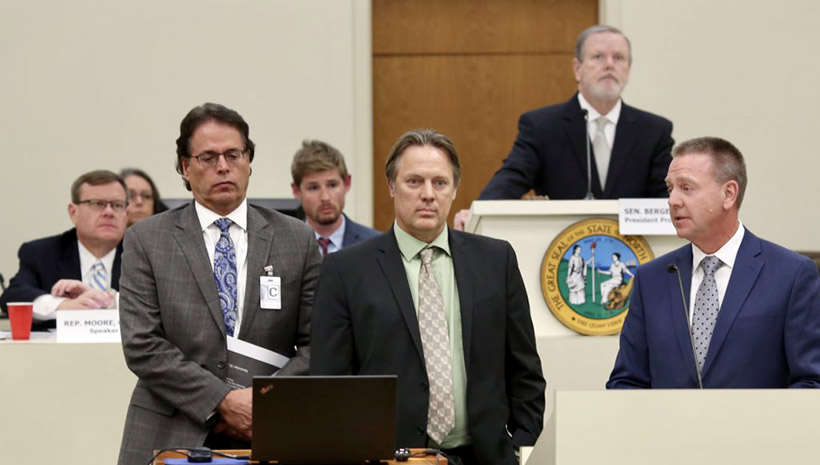 Coincidence or karma? You be the judge.

On November 20, at the same time Ambassador Gerald Sondland was testifying about the Trump administration's pressure campaign against the government of Ukraine, investigators hired by the North Carolina General Assembly testified Gov. Roy Cooper had "improperly used the authority and influence of his office" to pressure Duke Energy for concessions as it sought permits for a natural-gas pipeline.

In Washington, defenders of President Trump responded to Sondland by rejecting the existence of a "quid pro quo." Republicans cited the Ukrainian president's own statement that he perceived "no blackmail" in his phone call with Trump.

In Raleigh, Cooper's defenders also rejected the existence of a "quid pro quo" involving the timely approval of permits for the Atlantic Coast Pipeline, a financial concession to the solar-energy industry by Duke Energy, and the creation of a $58 million "mitigation" fund over which the governor would have exclusive control. Democrats cited Duke Energy CEO Lynn Good's own statement that the company did not see its concessions as a condition for approval of the pipeline - that "Duke did not and would not pay for permits."

The Atlantic Coast Pipeline story is complicated. The 82-page report and supporting documents from the investigation are worth reading if you desire the full context. But here's a synopsis.

Duke Energy is a partner in the pipeline, which will stretch from West Virginia in an arc through Virginia and Eastern North Carolina. Two state permission slips were at issue during 2017. One was a water-quality permit. The other was a "programmatic agreement" required before critical prep work could be done in West Virginia and Virginia.

Two groups expressed concerns about the pipeline to Gov. Cooper and his aides. One consisted of business and agricultural interests. While welcoming the economic-development potential, they worried that it might cost too much for local companies to tap into the pipeline. They wanted Duke Energy to help finance the connections.

The other group consisted of environmentalists and renewable-energy interests. They opposed any new fossil-fuel project. Solar executives were also in an ongoing battle with Duke Energy over rates. Essentially, solar companies wanted to be paid a lot more for their power than Duke planned to pay.

No one actually disputes that these three issues got linked together. The Cooper administration argues, however, that the state permits were not made conditional on the creation of the $58 million fund (its main purpose was to finance commercial taps on the pipeline) or Duke Energy agreeing to an estimated $100 million in higher payments to solar companies (which would ultimately be paid by you and me, the ratepayers).

Rather, Cooper's aides insist that they merely wanted to coordinate the public announcement of the permits, the fund, and the solar settlement. Oddly, their boss went further than that in response to the legislative investigation, which quoted Duke Energy's Lynn Good as saying that Cooper had brought up all three matters during a one-on-one meeting on November 30, 2017. "That's not true," the governor told Charlotte station WBTV. "Absolutely did not happen." He essentially accused Good of not telling the truth.

To accept the administration's version of events, you have to buy that permits Duke Energy originally expected to receive in mid-2017 but didn't get until January 2018 were not improperly delayed. You have to buy that Cooper's tough talk with Good on November 30 was not the reason Duke Energy suddenly ended its prior opposition to the mitigation fund and the solar-power settlement. You have to buy that all the publicly disclosed texts, timelines, and documents depicting the pressure campaign during the fall of 2017 don't show an administration abusing its regulatory power in order to placate its political allies.