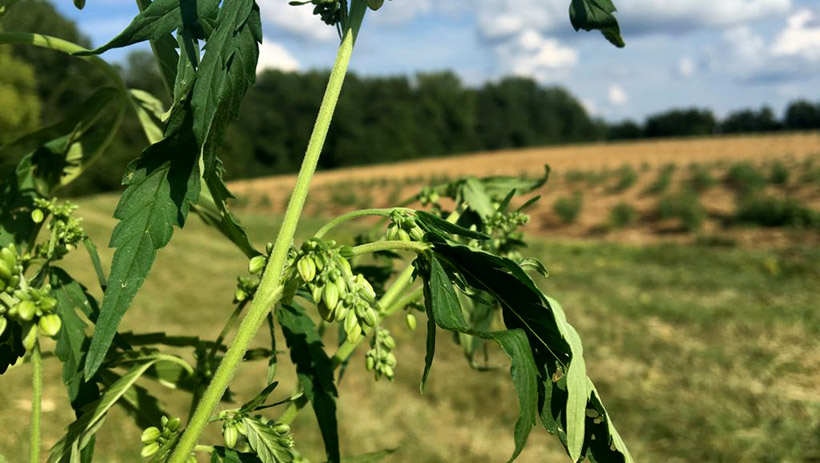 Male plants carry pollen sacks which, if they pollinate a whole field, could cost the farmer hundreds of thousands of dollars. | Photo: Brooke Conrad/Carolina Journal

North Carolina hemp farmers are bracing for an onslaught of federal regulation.

The U.S. Department of Agriculture on Oct. 31 released a new interim final rule that will govern all state hemp programs. While many of the federal stipulations for testing the intoxicating substances in hemp are similar to North Carolina's, the rule also makes it a lot harder for farmers to profit from the crop.

"At this point in time, we, as many other states, are trying to look into these current guidelines and say, 'Is this something we can actually meet?'" said Phil Wilson, director of the state Department of Agriculture's Plant Industry Division. "There are some issues that will be very difficult for us to meet as a program."

The N.C. Hemp Commission voted Friday, Nov. 22, to extend North Carolina's pilot program for one more year, which is allowed under the USDA regulations. After that, the state will have the option to adopt federal guidelines.

The USDA is taking public comment on the regulations through Dec. 30, after which it will issue a final rule. It will apply through October 2021.

N.C. farmers also are awaiting the fate of the state's farm bill, which could ban smokable hemp in June 2020. The House and Senate passed different versions of the bill, and the legislature won't return until Jan. 14.

On the bright side, the new regulations are the nation's first major step toward full hemp legalization, said Justin Hamilton, CEO of Hempleton Investment Group, which participated in establishing North Carolina's hemp pilot program. Until now, the hemp industry was always a "patchwork quilt system," with various rules across the states. Now, farmers can directly apply to the USDA for a license, even if their state doesn't submit a hemp industry plan to the federal government.

The downside is, the federal regulations are even more stringent than the ones currently adopted in North Carolina. Under the USDA, farmers would get only 15 days to harvest their crop after it's tested, in contrast with North Carolina's 30-45 day window. The adjustment will force farmers to harvest before the highly-marketable hemp flower - used in CBD oil and smokable products - is fully grown, draining potential profits.

The state Department of Agriculture doesn't even have the resources to enforce a 15-day timeline, Hamilton added. The program is built on private donations from farmers and doesn't receive state funding.

Typically, public comment is taken only if the rules are subject to change, Hamilton said. While it's unlikely USDA would adopt a 42-45 day testing-to-harvest window, a 28-32 day window may still be possible, he said.

A common complaint among N.C. farmers is the state doesn't allow them to grow strains that exceed a tetrahydrocannabinol (THC) content of 0.3%. THC is the psychoactive component in marijuana, where it usually exists in amounts of 18% to 25%.

Hamilton says 0.3% is an artificially low standard, adopted due to international competition. The requirement bans about 90% of possible hemp genetics, some of which test at 0.5% THC - only slightly higher than the legal limit. Several farmers say raising the standard to 1.0% would make it much easier to comply with the regulations.

"I hear people say that every day," Wilson said. He noted if a crop tests above 0.5% THC three times, the USDA regulations would label the farmer a "negligent grower" and suspend the farmer's hemp license for five years.

"To me, that's not reasonable," he said. "I think the standard should be much higher - maybe 1.0% - before you call them negligent."

The USDA, and North Carolina, also require states to test "total THC," not just delta-9 THC. Total THC measures both delta-9 THC - the compound that causes a high - and THC acid, the chemical compound that converts to delta-9 THC when hemp is cured or burned.

The new regulations are a "huge concern" to farmers in his program, he said.

"Why are they treating us like drug dealers?" Butler asked. "We're just trying to help the state and the family farmer."