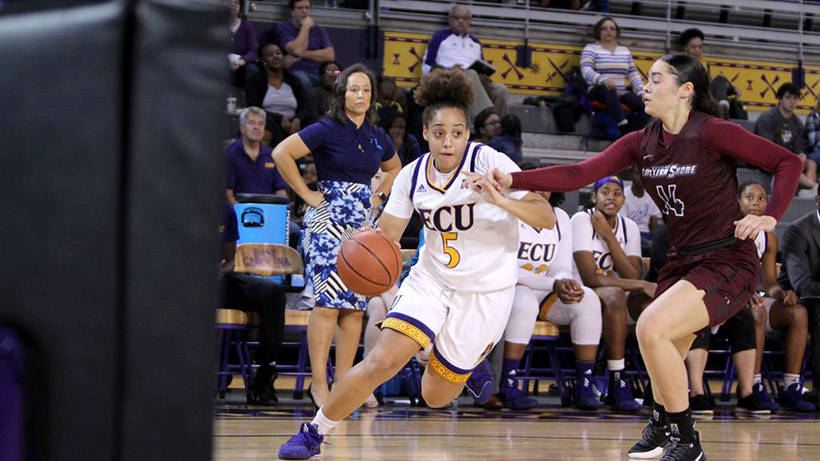 ECU improves to 2-4, snapping a three-game losing streak, while Maryland Eastern Shore loses its fifth straight and is now 1-5.

The Hawks were led in scoring by Amanda Carney, who had 14 points largely from four made three-pointers. Makayla Adams was also in double-figures, scoring 11 points. The 42 points scored by Maryland Eastern Shore is the lowest total for an ECU opponent since the Pirates held Savannah State to just 37 points on Dec. 20, 2017.

A balanced scoring effort and tenacious defense helped ECU jump out to a 14-4 lead at the end of the first quarter. Six different ECU players scored in the opening period, while the Pirates held the Hawks to 1-of-13 (.077) shooting in the frame. It is the second time this season, ECU has held a team to just four points in a quarter, the first being the second quarter against Middle Tennessee State.

The Pirates followed the same formula in the second period, this time with Thompson, Katerina Tsineke and Lashonda Monk all knocking down triples while forcing the Hawks into 3-of-12 (.250) shooting. Along with stopping the Hawks from making shots, the Pirates also forced 16 turnovers in the first 20 minutes. That helped the Pirates extend the lead to 30-11 at halftime, the largest halftime lead of the season.

In the third quarter, shots from behind the arc helped the Hawks climb back into the game. Carney shot 4-of-5 from three in the quarter and scored all of her 14 points. Maryland Eastern Shore shot 8-of-13 (.615) in the frame and scored 22 points to cut ECU's lead to 43-33 heading into the fourth.

Another Maryland Eastern Shore three-pointer to start the fourth quarter made it just a seven-point game, the smallest deficit since the first quarter. But Thompson buried a three-pointer of her own to restore the lead to 10 points and from there, the Pirates never allowed their lead to drop to single-digits.

ECU will try to win its first road game when the Pirates head to Longwood on Tuesday night. Tipoff is scheduled for 7 p.m., in Farmville.

ECU Notes
ECU Quotes     Head Coach Kim McNeill     Opening Statement: "I'm so excited we got the win because we needed it. We talked about it before the game that we were in desperate need for a win but I'm not happy with the way we won the game because there's a standard and there's an expectation for this program."

On being able to lead the entire game: "We talk about it all the time, if you can defend you always have an opportunity to win the game. Obviously, that's what we will continue to do best."

On the defensive effort: "We came out with the right approach and the right mind-frame in the first half. Then in the second half, we got a little bit lackadaisical and played to the scoreboard. We talked about score being 0-0, don't look at the score, play the way we know how to play. Play defense the way we know how to play and keep pounding. That's a lesson we've got to learn."

Junior guard Dominique Claytor     On trying to master a new defensive gameplan: "It's definitely different than what we're used to, but we're learning slowly but surely."

On what this win means for the team moving forward: "Going on the road, it just pumps us up even more to be able to play well together no matter what."