Jayden Gardner poured in a season-high 28 points and East Carolina pulled away for an 85-68 victory over Evansville on Friday in the Islands of the Bahamas Showcase to snap a three-game losing streak. east carolina university, ECU, men's basketball, evansville, final score, november 25, 2019
Home
Categories
Login

ECU Tops Evansville to Advance Into the Semis 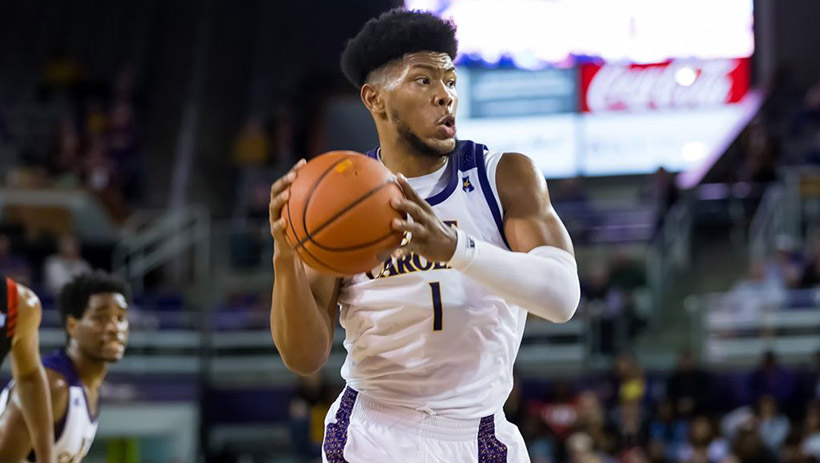 NASSAU, Bahamas     Jayden Gardner poured in a season-high 28 points and East Carolina pulled away for an 85-68 victory over Evansville on Friday in the Islands of the Bahamas Showcase to snap a three-game losing streak.

With the victory, ECU advanced to the semifinals to face Kansas City, who outlasted George Washington earlier in the day, at 8 p.m.

"We guarded a lot better and we definitely kept people in front of us" Pirate head coach Joe Dooley said. "I thought our defensive positioning was pretty good, we did foul a little too much at the end and in some spurts. When we didn't turn the ball over, I thought our offense actually got going pretty good."

The Pirates scored the first nine points of the game and rushed out to a 14-2 lead in the initial 8 1/2 minutes, while forcing five turnovers during that span and yielded only a pair of free throws.

Evansville missed its first eight shots before Sam Cunliffe made his first of five 3s in the game with 9:27 remaining in the half.

Cunliffe ten buried a second and Noah Frederking a third as the Aces scored nine points on three consecutive 3s in 70 seconds to pull within five.

ECU saw its lead shrink to two inside of a minute to play before halftime, but Miles James made the final basket of the half and the Pirates held a slim 4-point lead at intermission.

Gardner scored four straight points to start the half and Tristen Newton the next two to push ECU back out to a double digit lead less than three minutes out of the locker room.

Newton added 18 points and five assists with just one turnover in 38 minutes of action, which included a perfect 9-of-9 performance at the free throw line.

"He did a nice job of getting downhill," Dooley said. "He played a lot of minutes tonight, we've got to get him some rest."

A quick 7-0 spurt gave ECU a 45-34 advantage and its lead never dipped under nine points the remainder of the contest.

Cunliffe made it a three-possession game, 75-66, with 3:25 left, burying his fifth and final three of the game. The Pirates then ran off 10 unanswered points to seal the victory.

Senior Seth LeDay had 12 points, while freshman Brandon Suggs scored 10. Gardner grabbed 10 rebounds for his third double-double of the season.

"[Jayden] got some favorable matchups down in the post," Dooley explained. "We were able to punch the ball inside and get to the free throw line [28 times]."

Cunliffe and Frederking topped the Purple Aces (3-2) with 17 points apiece. Artur Labinowicz came off the bench to score 12.