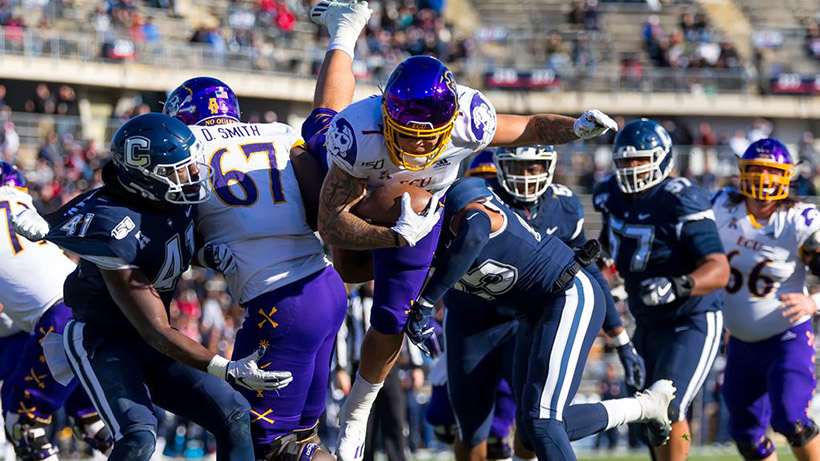 EAST HARTFORD, Conn. — East Carolina had to scrap and claw, endure and survive, but every ounce of effort produced a critical victory Saturday afternoon in Mike Houston's first year as head coach.

After seeing an early 14-point lead dissipate, the Pirates scored the go-ahead touchdown with 3:28 to play then blunted UConn with 1 second remaining on Colby Gore's interception at the one-yard line to prevail 31-24 in an entertaining duel between teams desperate for their first American Athletic Conference victory.

For the Pirates (4-7, 1-6 AAC), the win on a clear but cold day at Pratt & Whitney Stadium marks a significant step in the rebuilding process. Not only did ECU notch its fourth win after three consecutive 3-9 seasons, it also ended a five-game losing skid this year and halted a string of 10 consecutive losses in road conference games dating back to a 41-38 victory at UConn on Sep. 24, 2017. The Pirates had not recorded an AAC road away from home against an opponent other than UConn since defeating UCF on Nov. 19, 2015.

"You talk about needing one; we needed it," Houston said. "What a great effort by our kids. I'm just so proud of them. It was not pretty. We made some mistakes, but our kids played hard, they played together, they never doubted each other. To come back over and over and over again on the road, to get our first conference win, what a special performance by that bunch."

The Pirates needed numerous clutch performances to overcome a pesky UConn team that owns just six total wins the last three years and entered its last-ever home AAC game as a double-digit underdog - the Huskies are exiting the conference to become an independent in football and Big East member in basketball.

Gore's game-preserving interception - the third turnover forced by the Pirates - salvaged the day for a defense that surrendered a bevy of big plays and 527 total yards. After ECU took the lead on a 2-yard run by Holton Ahlers, UConn freshman quarterback Jack Zergiotis directed the Huskies (2-9, 1-7) from their 25 to the ECU five before throwing two incomplete passes and being picked off by Gore, a senior from Little River, S.C.

"We work on these types of situations every day in practice," Gore said. "We were just relaxed, trying to get everybody to catch a vibe, and just play and be relaxed. We're going to make plays. We're playmakers. We're not out here for no reason."

Running back Darius Pinnix, Jr. was just glad to be on the field after missing eight games with an injury and injected some life into the running game with 105 yards and a pair of touchdowns on 26 carries. The 6-0, 234-pound junior showed his stamina late and sparked the game-winning drive with five carries for 35 yards.

"It's great having a bruising running back that can take the game over at times," Houston said. "Certainly our ability to run the football was a big factor in today's game.

"I'm really proud of Darius. I was worried if he was going to shoot all of his energy there in pregame because he was so excited to be back playing. He's been like a little kid on Christmas morning all week knowing that he was going to dress and play today."

Pinnix embraced the chance to play again this year.

"It's a blessing just to be out here because we weren't sure if I was coming back this season," he said.

Ahlers, who compiled 1,033 yards and 10 touchdowns through the air in the two previous games, turned in another solid performance by completing 34 of 50 passes for 374 yards with one touchdown and two interceptions. For the second-straight game, diminutive Tyler Snead emerged as his favorite target, catching 16 passes for 126 yards to boost his two-game totals to 35 receptions for 366 yards.

The Pirates, however, struggled to find an early rhythm coming off a bye week and found themselves in a quick 7-0 hole, just 1:53 into the game after Zergiotis zipped a 40-yard touchdown pass to fellow freshman Cameron Ross one play following a 38-yard punt return by Quayvon Skaynes.

The Pirates then overcame a holding penalty that wiped out a 33-yard pass to C.J. Johnson and a near interception to take a 10-7 on a 3-yard run up the gut by Pinnix. Johnson came up with a pair of tough catches totaling 69 yards, the last of which covered 26 yards to the three.

ECU had a chance to extend the lead but could not cash in a fumble recovery by Davondre Robinson, who scooped up a loose ball when Zergiotis mishandled the snap on a third-and-1 from the ECU 42. UConn also failed to take advantage of a turnover, an interception by Diamond Harrell after Hatfield stumbled while fighting double coverage.

The Pirates stretched the lead to 17-7 with 1:49 left in the half, marching 90 yards in 13 plays capped by a 17-yard pass from Ahlers to Zech Byrd - the tight-end's third touchdown grab of the year.

UConn threatened to strike before the end of the half, reaching the 18 before Robinson picked off a Zergiotis pass along the left sideline. The Huskies converted a fourth down with a 21-yard reception by Matt Drayton to get in position to score but opted not to use one of their two timeouts, and Zergiotis forced a pass into coverage with the clock ticking under 20 seconds.

The Huskies, aided by a third-down offside penalty, did find the end zone quickly at the start of the quarter to draw within 17-14. Zergiotis hooked up with Drayton on a 47-yard pass then tossed a 20-yarder to Jay Rose open in the middle of the field for the score.

ECU responded with an eight-play touchdown drive highlighted by the running of Pinnix and a 28-yard catch. Pinnix barreled in from the one for his second score of the day and a 24-14 advantage.

Verity saw a streak of 13 consecutive made fields goals to come an end when a 46-yard attempt sailed wide right with 3:54 to go in the third quarter. UConn then pieced together a 10-play drive, reaching the Pirates' 6 before settling for a 27-yard Clayton Harris field goal. A one-handed catch by Elijah Jeffreys for a 27-yard gain set UConn up at the 10, but Kendall Futrell sacked Zergiotis for a loss of 10 yards on second down to derail the drive.

The Huskies, backed up their five after a penalty, tied it with 9:28 to play with a lightning-quick strike on their next possession when Ross got behind Daniel Charles, snared a pass from Zergiotis and won a footrace for a 94-yard touchdown.

Keyshawn Paul then gave the sparse crowd hopes of an upset when he broke on an out pass to Johnson - reminiscent of a game-changing interception in ECU's loss to Cincinnati - picked off Ahlers and rambled to the ECU 34. The Huskies managed to gain just two yards, and Harris missed badly wide and left on a 50-yard field goal attempt.

The Pirates took over with 6:59 showing and needed nine plays to punch in the go-ahead score. Zergiotis nearly succeeded in his bid to respond, converting a third down with a 37-yard pass to Drayton and hitting Donovan Williams for 23 yards. But he misfired on the final play, throwing it into a crowd where Gore was waiting to seal it.