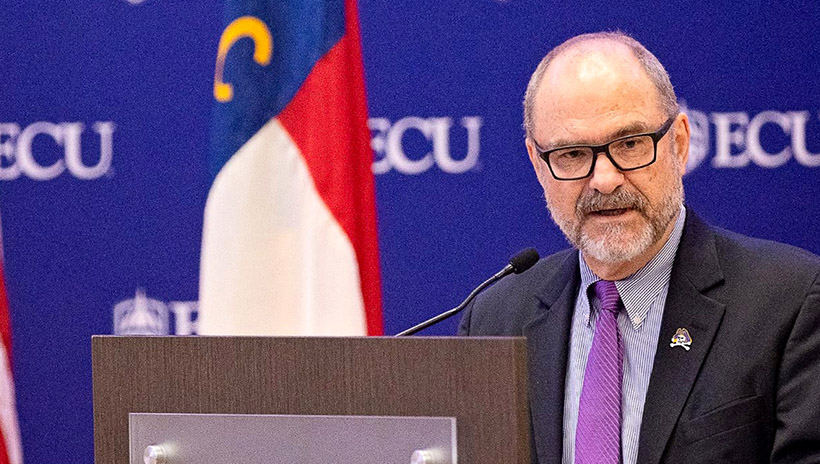 Dr. Ron Mitchelson, interim chancellor, presents highlights and news from the university during the ECU Board of Trustees meeting on Nov. 22. | Photos: Cliff Hollis

The East Carolina University Board of Trustees approved increases in student tuition and fees beginning in the fall 2020 semester and announced a search committee to find its next chancellor during a meeting Nov. 22.

Tuition will increase $134 annually or 3% - the maximum allowed by the state - for incoming in-state freshmen if approved by the UNC System Board of Governors, which is expected to consider proposals for its institutions this spring.

Undergraduate in-state tuition would increase from $4,452 to $4,586 in 2020-21. The increase would generate about $830,000, which would be used for degree completion scholarships, property insurance and updating the university's network.

A $50 increase in the athletics fee was approved by trustees despite an ECU Student Government Association Assembly (SGA) resolution against it. Projected revenues are more than $1 million, which will go toward the annual athletics operating shortfall.

SGA president Colin Johnson, who voted against the tuition and fee increase, reiterated concern about the athletics budget and its growing reliance on student fees. "Student government thoroughly vetted all the proposals," Johnson said. "We have serious concerns about the sustainability of athletics and how it affects student auxiliaries."

Bob Plybon, chair of the finance and facilities committee who presented the proposal to the board, said ECU is eighth for undergraduate residents in the UNC system schools in tuition and fees, and 18th out of 19th in its peer group nationally. ECU ranks fourth overall for tuition costs in the UNC system. 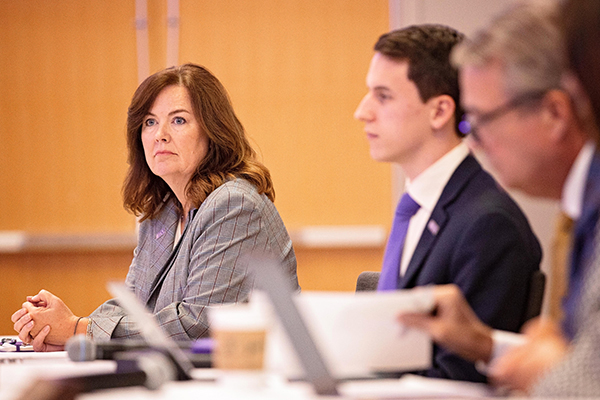 Leigh Fanning, left, and Colin Johnson listen to committee reports during the Board of Trustees meeting in the Main Campus Student Center.
"Nobody likes to raise tuition and fees, but we have had no increase for three years. Tuition is locked after they (students) come in for four years," Plybon said. "We likely won't be able to increase next year. We feel it's time."

To help address student government concerns, the Campus Tuition and Fee Committee (CTFC) recommended that the chancellor establish a committee of students, faculty, staff, administration, donors and community residents to study and develop a long-term sustainability plan so recommendations can be made before the start of the 2021-22 tuition and fee proposal process.

The CTFC had meetings in October with students and reviewed current tuition and fee policies, past rates and increases, peer institution rates, and guidance from the UNC System office. The committee recommended approval to Interim Chancellor Ron Mitchelson, who supported the recommendation.

In addition, the following tuition increases were approved for masters' programs in the College of Business: business administration ($450), accounting ($450), and sustainable tourism and hospitality ($2,700); and the College of Health and Human Performance (athletic training - $2,280). The proposal also includes stand-alone certificate programs in business.

The following nonmandatory fees were approved:


In other action, trustees chair Vern Davenport announced the formation of a 20-member search committee to identify candidates for the next ECU chancellor.

"This committee represents the very best of ECU - our faculty, staff, students, administration, alumni and donors - the Greenville community, Pitt County, eastern North Carolina and the state of North Carolina," Davenport said. "We hope to garner support from the community, not only for the candidate pool that we'll be working with, but also the process by which we'll be working."

Davenport urged the community and university stakeholders to participate in the process through a survey that will be widely distributed and can be found on the chancellor search website as well as listening sessions that will be conducted in early 2020.

The committee has scheduled its first meeting on Dec. 10, when it will receive its charge from Dr. Bill Roper, UNC system president. "We want to have a chancellor in place before students report for fall 2020, so it's a very aggressive timeline, which is why we're starting this process now," Davenport said.

"Our primary responsibility as a committee is to choose the best candidate that we can to unite Pirate Nation to move us forward over the next decade and beyond," Davenport said. "This university is just too important to this community, this region and this state to not accomplish this endeavor. And we are stronger, as you all know, when we're working together."

Trustees also approved the conferral of degrees for about 2,300 December graduates. Commencement will be held at 9 a.m. Dec. 13 in Minges Coliseum.