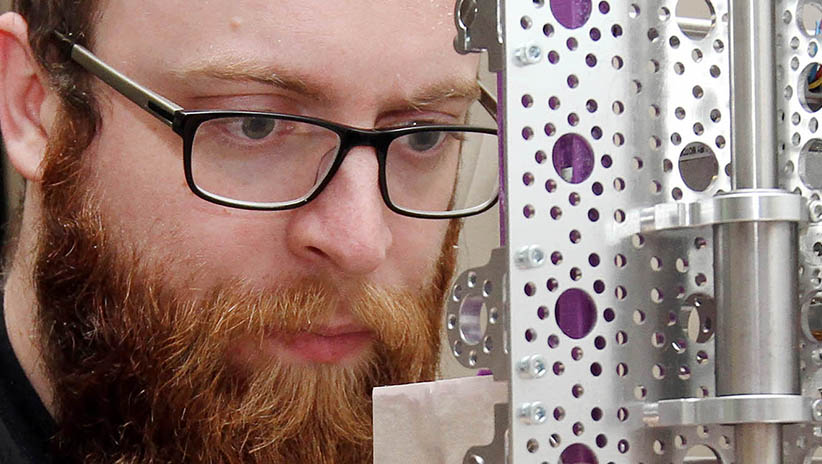 ECU student Sean Wear, vice president of the ECU chapter of the Association of Technology, Management and Applied Engineering, works on a robot for the ATMAE national conference. | Photo: Ken Buday

Preparation paid off for a team of East Carolina University engineering and technology students with a first-place finish at a national robot competition.

The members of the robotics team of the ECU chapter of the Association of Technology, Management and Applied Engineering (ATMAE) won four of five categories and the top overall prize for the first time at the competition at the ATMAE national conference Nov. 6-8 in Charlotte. 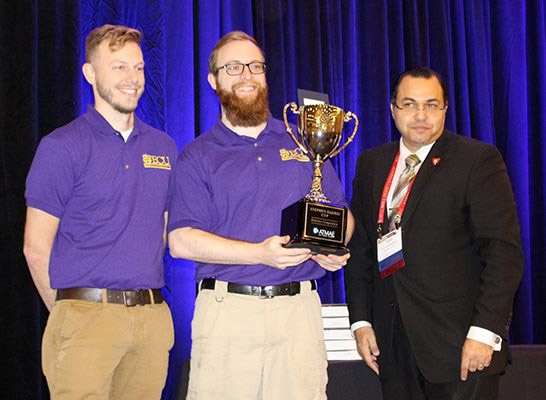 Logan Kelley, left, and Sean Wear, co-leads of the East Carolina University robotics team, receive the Steve Harris Cup for winning the Association of Technology, Management and Applied Engineering robot competition at the organization’s national conference in Charlotte. | Photo: Contributed
"We were super excited," said junior Logan Kelley, ECU's ATMAE president and co-lead of the robotics team with senior Sean Wear. "We finally got to see the results of all the hard work we all put in over the last nine months. We were overwhelmed with what we won. I don't think we were expecting all that."

The ECU team won awards for electronics and controls, and innovation and design. It won the timed warehouse competition in which the robot had to pick up objects of various shapes and weights and place them on shelves of various heights without running into simulated obstacles on the warehouse floor. The team also won the tag competition in which robots competed to capture flags placed on the machines of others. The team took second place in the fabrication and safety category.

For its victory, ECU's name will be placed on the Steve Harris Cup, the permanent trophy of the ATMAE competition.

"I'm super proud of these students," said William McClung, teaching instructor and faculty advisor for the robot team. "They did a really great job. It was their effort that made this possible. They worked on weekends and Friday afternoons after class and on Wednesday nights when they practiced. I think it proves that if they do the things we're teaching them to do, it will go well." 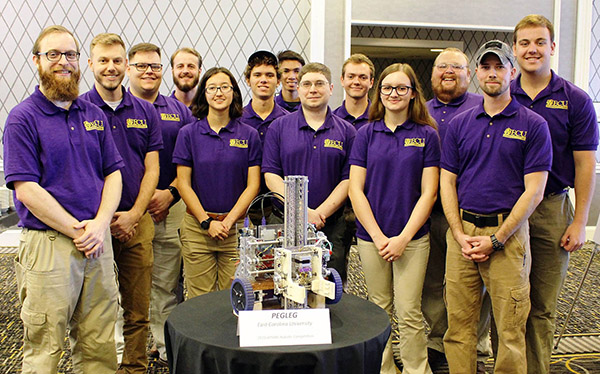 Members of the robotics team stand with their creation. | Photo: Contributed
McClung said the team got a late start in last year's competition and did not perform well. He said members applied those lessons this year, organizing themselves in the spring when the rules of the competition came out into specific groups to tackle each task associated with building the robot they named Pegleg.

"They saw what happens when you're not prepared, and they turned that around through hard work and dedication to this program," McClung said. "They did a really good job of reading the rules and understanding the game. They did a good job of analyzing that and developing a robot that fit that. They did a lot of the basic stuff to make it successful: They read the rules; they understood the game; they practiced. They did a lot of preparation, sometimes boring preparation, but it was that stuff on the front end that really made them successful."

"The goal is to get these students tied in with industry and give them opportunities, and this gives them those opportunities," he said. "People see the design work and the automation work and the programming that went into this, and they're impressed.

Beyond the competition, the conference offered networking opportunities for the students and presentations from industry leaders on a variety of engineering and technology topics. 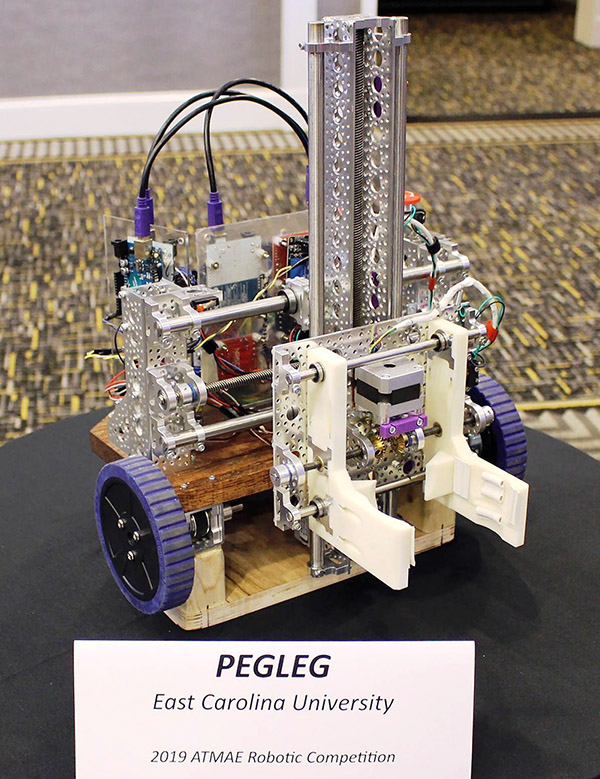 ECU’s robot, named Pegleg, won four of five categories at the competition. | Photo: Contributed
"It was good to hang out with people from other schools and meet new people, experience the conference and meet industry workers who could give us advice on the future," Kelley said. "It was really beneficial."

Kelley said the team will be losing some valuable seniors to graduation and looks forward to building the ATMAE organization at ECU so it will continue to be competitive in the robot competition for years to come.

"In our group chats, we're already talking about new things for next year and the build we're doing and what we're going to change and improve upon," Kelley said. "I'm just proud of the team and proud of the work they put in. I'm glad to see it all pay off. It made all the time worth it even more. It was already worth it because we learned so much, but it's nice to bring some trophies home too, especially a pile of them."

Amy Frank, the teaching instructor in the Department of Technology Systems, serves as the faculty advisor for ECU's ATMAE chapter. For more information on the chapter, email her at franka@ecu.edu.